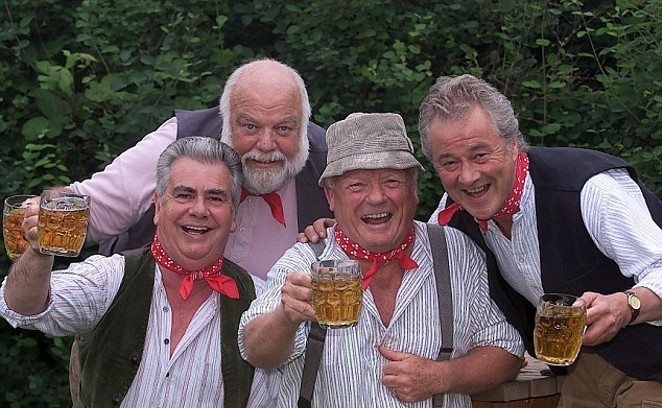 In tradition of dyeing the river greener than it already is year-round and boasting an impressive amount of colorful watering holes, San Antonio could easily be Dublin's long-lost party animal cousin. To celebrate getting wasted, pigging out and the patron saint of Ireland, here's seven songs which to chug Guinness and eat Shepherd's Pie.

Flogging Molly - "Drunken Lullabies"
After a night of mechanical bull riding and downing pitcher(s) of green beer, the only lady you'll be serenading drunken lullabies to is the porcelain goddess.

The Wurzels - "I Am A Cider Drinker"
The Wurzels and their novelty cornball anthems found success in England and Ireland but never quite caught on in the States. Shame, 'cause nothing goes together better than cow shit and alcohol.

Dropkick Murphys - "I'm Shipping Up To Boston"
Even though the Dropkick Murphys aren't legit straight-off-the boat from Ireland, the spirit of the working class people plays a major chord in their music. Oh, and their shamrock punk seriously inspires jello shots and drunk river dancing.

U2 - "Vertigo"
With his countless efforts to save the planet, end poverty and his role in "Do They Know it's Christmas?" Saint Bono is about as close to a modern day divine being as we'll get. Can you give me a "Tonight thank God it's them instead of you?"

Stiff Little Fingers - "Wasted Life"
After six pints, you'll swear that you're starting a mini-revolution pissing in the alleyway behind Pat O'Brien's.

Black Flag - "Six Pack"
Who needs top shelf margaritas, fancy mojitos or the kind of Champagne that rappers douse their video babes with when you can score some good 'n' cheap Lone Stars at Diamond Shamrock?

Thin Lizzy - "Cowboy Song"
Although from Ireland, Thin Lizzy knows what's up in the Texas party scene: Rodeos, starry nights and forgetting girl's names are all pretty key components. No one ever said that Irish Cowboys weren't cool.