The SXSW bottle venue is a nightmare. It has a recognizable form. It's a Venus fly trap where the nectar is buzz bands and free alcohol. Long lines keep people inside, for those who made it in dare not leave and risk not getting back in for the band they really want to see. So you're stuck in Fader Fort or Mohawk or, in this case, Stubb's, growing slowly insane in the midst of a crowd with too little space to have a decent panic attack without risking someone on staff saying you're blocking the path. This is the dark side of SXSW, the large, corporate, unfeeling buzz and wealth generator, he scribbles as he continues to drink on SpinMedia's dime. Sure, I'm playing a tiny violin, but this is where art is now, how it feeds itself, and perhaps how it eats itself.


Bleached's 1:20pm set at the Spin Party at Stubb's went hard. They have a garage rock sound and a lead vocalist who has a roughness to her that doesn't really make it seems like she's giving that much of a fuck about her vocals. It fits. They rock hard and her scratchiness is made for this. Yet, it resounds. Her voice isn't sweet, it bucks just as hard as this band. They're a garage outfit and they're fantastic.


Playing hip-hop at SXSW is weird. It's a mixed crowd, fandom considered, since most are here taking in a musical sample plate, thus they're not all here specifically for you, whoever you are on stage, they're all just here. Some are here for you, but this is a place for bouncing about. Oh, yeah, and there are a lot of white people around. Like, a lot. Sure, the black people come through, they know where to find what calls to them, but, man, there are a lot of white people around here. This is the scenario surrounding Vince Staples' 2pm set.

The cheers were halfway there and not as enthusiastic as Staples had hoped. "Damn, this going to be one of those days," he remarked at the top of the set, yet he didn't try to save the moment; he went right into his intro shpiel and off goes the set. The middling responses seem to pain him, but they're there. This is the test — the non-dedicated room. I don't listen to much hip hop. I'm here for the free drinks (tip your bartenders). Win me over. 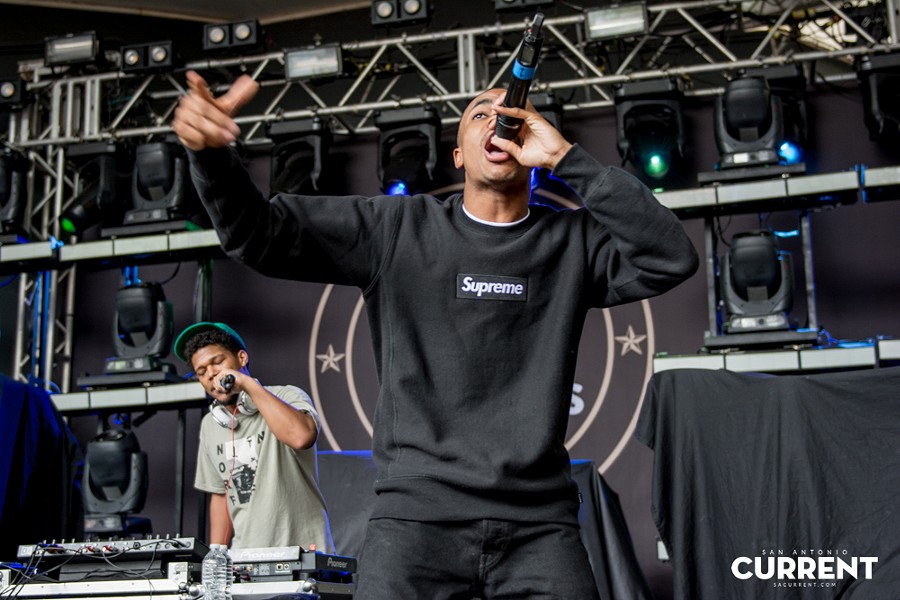 As the set went on, Staples said he felt "like I'm in a slave auction."


"This one's got all his teeth," his DJ replied.


These asides, much like this racism, is killing me inside. "He's real as fuck," a guy says while walking away. "He's getting too talky-talky for me," some white woman says before breaking away as Staples talks about the weirdness of this gig, of being black in Texas; he can grab some of this crowd, those that he wanted in the first place. I, being Negro, found all this hilarious, hilarious in the same sad way one has to get through being black in Texas. This seemed all too recognizable. One hopes the brother stays up.


What does the late career SXSW appearance say? Not the gather buzz appearance, the build brand appearance, the try to "make it" (whatever that means nowadays) appearance? Deftones' 3pm set at Stubb's was a let's-do-some-shows-here-while-everyone-is-in-town, while-we're-all-still-trucking-along appearance. I'm not quite sure what that says. This level of excitement is surprising and understandable at the same time. They started cracking speakers at the top of the set. This is the hype Vince Staples was looking for. All he has to do is implant himself onto everyone's high school memories; that or be louder and sicker than everything to the point that you'd hardly notice if they weren't hype with you. Otherwise, they played the hits with the precision and vigor one would expect, that many remember (even if only peripherally, but even that peripheral memory would mean these guys are monsters enough to execute just as well still to this day).

Hinds played their third show of five that day, their twelfth of 17 that week, at the Radio Day Stage at 5pm at the Austin Convention Center, bringing a breeziness to Ballroom D. They're going through the gauntlet and they're just as fair and fancy-free still. They must stay energized from their own vibrations, like a pendulum.

As a music journalist who dwells largely in the genre of jazz, I have been told frequently of Snarky Puppy. They're a big band, and I'm not crazy about big bands. Too many musicians frequently means not enough room for improvisation in the hands of a lesser arranger, or a large group of people waiting their turn to play as opposed to truly creating together.

In discussions with other jazz fans, I've been told that some of my concerns with this band are valid on their albums, but I have to hear them live. I heard them live last night along with Banda Magda at Palm Door on Sixth at 11:55pm, or backing her, I suppose. They certainly gave good support. They're a good backing band, I guess. Or maybe I'm just being grumpy. The crowd is won over. Magda noted how the  audience participation on one song was "the most enthusiastic this song has ever been done before." There are multiple parts to songs and an audience — many, many jazzbros — who are more than amped to follow along with dense arrangements. But I'm still calling it pleasant.

There's a lot that builds to pleasant, it's not as if this isn't very well executed, yet Magda clearly is the star here. She's a focal point for attention. I'm not fully sure what this band is yet on their own (until their set tonight, perhaps, at Cedar Street Courtyard). Their being so downplayed could be by design, but this is still reading pretty damn pleasant. I know why I'm here, I don't know what would still bring me. Why should I care when everyone is too coordinated? Rigid?

In a panel in the Convention Center Thursday afternoon, pianist Robert Glasper, who made the score for Don Cheadle's directorial debut, Miles Ahead, a non-biopic biopic about Miles Davis which screened Wednesday night (I missed that) and tonight (will definitely be seeing that), spoke about what he appreciates about his two bands. That his Robert Glasper Experiment and Trio can not only execute the brilliance he hears in his head but also bring something to the table to make them even better than what he was hearing. I don't hear that in Snarky Puppy. I'm hearing someone's well-executed idea. It's cool. I danced. I'm not waiting for the album.