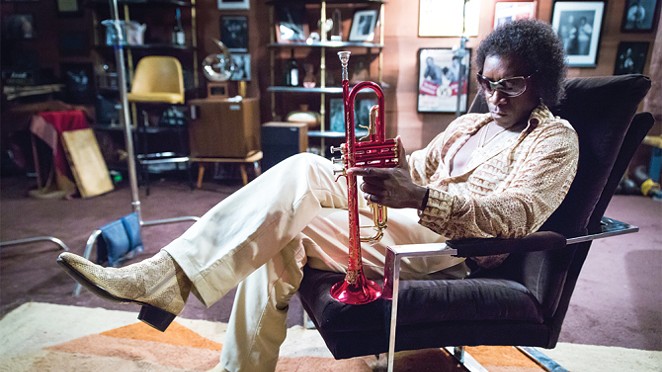 SXSW is a marathon, not a sprint, so it would stand to reason that by Saturday, the last true day of the festival, that taking it easy would be the best idea, thus I spent much of the first half of the day sitting in theaters, taking in music videos at the Alamo Ritz (you know what's awesome? The brilliance of Son Lux's pin-pricked "Change is Everything" video on a big screen) and seeing a 7pm screening of Don Cheadle's directorial debut – the Miles Davis non-biopic biopic Miles Ahead – at the Stateside Theater.


Cheadle set out to make the kind of movie Miles would want to make, to star in, and this certainly seems to be the case, making a technically crafted (particularly with regard to the score by Robert Glasper and the dubbed in trumpeting of Keyon Harrold) story about Davis' creative drought to the chagrin of his record label and his relationship with his ex-wife Frances.

In an effort not to make the boring, standard checklist movie that no one can really do anymore after Walk Hard: The Dewey Cox Story pretty much laid the format to waste, what results is a look at a snapshot of the Chief, as his family would call him, in repose – or as much repose as Davis' ferocity could handle – as he attempts to recover a stolen tape of new recorded music from a record exec. It's a made up story but a damn fine frame and it works. There's a lot of pressure to pull off a biopic about one of the greatest trumpeters and artists ever, with the eyes of the jazz world and the Davis family watching, but Cheadle pulls it off, co-writing, directing and starring as the legend.

And I got to sit down for two hours. That was nice.

My day truly began, though, at 12:45pm to hear my friends Zettajoule play the Austin Beer Garden Brewing Co. way south on W. Oltorf (which brewed the best beer I've had this whole week). This band is brilliant, truly, in part because they're rather difficult to describe. Finding an analogue for their sound is hard — they could be like where Solange Knowles is right now, they could be a little Octopus Project-y. This could be in part because of the band's depth of musical knowledge. Their taste is wide and thus their musical creation reflects that in their clever arrangements, breakdowns, tempo jumps, the new movements – but they never forget to connect first, to be catchy.

I've been crashing at their house in Austin for years now whenever I come to town and they're good friends and great people, yet I had never heard them play before. I'm glad me, and the people steadily rolling into the ABGB for surprisingly good pizza and beer and a surprisingly good price on an early Saturday afternoon far away from the rest of the city, got to hear what a clever pop sound could be like.

Stones Throw's party at the Empire Garage and Control Room was celebrating 20 years of existence as "that label for that clever hip hop," continuously making the soundtrack for steady stoner head nods. MNDSGN and Samiyam DJed a bit. Karriem Riggins did his thing, which involves producing, DJing and merking the drum kit, though more like a steady build or a slow wound than an all out slaughtering.

Homeboy Sandman rapped with his depth and casual off kilter-ness that always fit with this label's jazz sensibility, though performing here with more ferocity than anticipated. This is the hang. There were sets, they had time limits, but it felt more like cats rolling through with a "yo, check this shit out" vibe than the corporate clusterfucks other shows can be. For 20 years, Peanut Butter Wolf has amassed the hang, these people, to make "yo, check this shit out moments." For 20 years, they've nodded heads … and facilitated a preposterous amount of crowd murmur; Jesus, people, do any of you want to hear this set really?

Bloc Party is still a thing. They've apparently always have still been a thing. Some band members have changed out over the last three or so years, but they're still a thing, and they're still pretty good. They make rock music that can evoke dancing, particularly with a group of Australians next to me who were the worst and were distinctly more hype than absolutely anyone else at the Pandora Discovery Stage at The Gatsby at 12:40am.

Perhaps it was the exhaustion of the end of the last day of the festival why everyone there seemed to be giving a B+ performance. The crowd danced alright, the band rocked but without a sense of urgency, but at the last day of SouthBy, could you blame them? I certainly can't. It was still a good set and I'm pleased to know they're still a thing. I'll try to be less derisive of them in the future. Thanks, Pandora.


Near the end of the set, lead singer Kele Okereke's mic went out. A sound guy came out to fix this center stage while the band played on and Okereke kept singing. Okereke hugs the man crouched on the floor, messing with the dude while everyone still kept playing and singing and fiddling with cords without missing a beat, though this dude is still thrown off. Eventually, the problem is fixed and everything works out fine. It's been a long week.