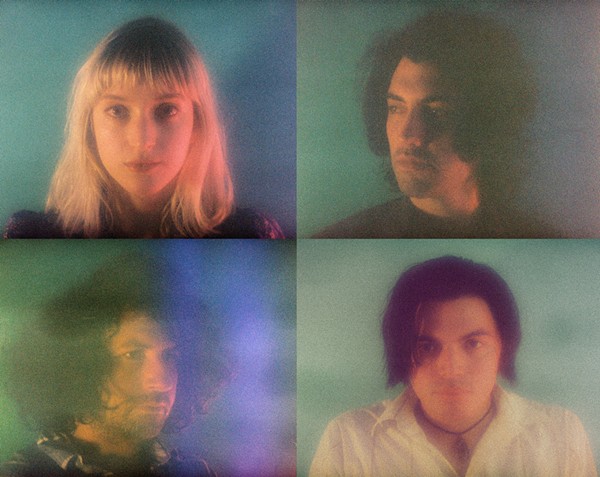 From their start in former San Antonio bands The Grasshopper Lies Heavy, So Unloved, Great Northern Guns, Solid Gold Eagle (née Fuck City USA) and stints in numerous other groups, Chris Cheveyo and Pat Schowe have been working hard, keeping their heads down and noses to the grind for well over a decade. They moved to Seattle about seven years ago and started a trippy, pixie metal band, (think Black Sabbath meets The Doors meets Jefferson Airplane meets Fleet Foxes) called Rose Windows. Perhaps you’ve seen them on one of their tours through town.

Rose Windows signed to mega-indie label Sub Pop (who have also signed Nirvana, Sleater-Kinney, Shabazz Palaces, Beach House, Soundgarden, Mudhoney and The Postal Service, to name a few). Although the group eventually called it quits, Schowe and Cheveyo are currently hard at work touring with their new psychedelic dream pop quartet – quixotic and Lynchian, the aural equivalent of spelunking on acid inside of a rainbow – the appropriately-titled Dræmhouse.

I recently spoke to them from a stop on their tour with Portland’s Candace to discuss the Seattle and San Antonio scenes, what the two share (or don’t) and “making it.”

As outsiders, now, what are some changes you’ve seen in SA since you lived here?

Schowe: As far as the last time I was there, as compared to like four or five years ago, it’s really changed and I think in a good way. Maybe in kind of like a hipster way, but it feels like there’s some sort of vibe there that wasn’t really there before.

What are some of the basic differences between a city with a really vibrant underground music scene, like Seattle, and a place whose scene is (supposedly) on the rise, like San Antonio?

Cheveyo: I think the big difference is there’s always someone to play for in Seattle. You can’t go anywhere without walking into people that are trying to do anything – not just with music but with art, photography, everything. In general, all those things seem to mean a lot. I feel like we went there to write songs … to be around a songwriting culture.

Schowe: There’s also, I guess more of a cooperative sort of vibe there, I feel. It’s just very supportive and it’s supportive in like every sort of facet. Like, the ballad country people will go out to the Capitol Hill kind of more hip, crust shows and vice-versa. It’s not so ‘this is my scene, and this is your scene.’

That’s coming from San Antonio, which felt a little bit like … before I left it felt in a weird way more of like a cutthroat-y scene.

Cheveyo: I think [Seattle bands] know that if they work together, lots of bands can become successful by promoting each other instead of tearing each other down. That definitely seems to be a thing. When the bigger bands in Seattle start to book other bands, then it creates a scene where there’s a lot of bands appearing on NPR and shit like that, because they’re all supporting each other, in everything they do, even if it’s not their style.

I felt like when we left San Antonio, I don’t know what it was like before the time that I was there, but it seemed like it was in transition. It was always gonna become what it’s start to become now. Because it seems to me like … it’s getting bigger.

Is it possible that there are simply better bands in Seattle and that helps aid in the discovery-factor, or success?

Schowe: I am blown away a lot in Seattle. I don’t know what it is, man, there’s just a lot of great players there.

Cheveyo: It’s just creativity is what I think. Honestly, I thought San Antonio players were skillfully at a higher level. But the creativity of Seattle and the sort of songwriting sort of prowess is incredible there. I don’t know why but it’s just rife with songwriters.

Schowe: I like to think that it has a lot to do with the weather, and I know that’s weird, but I feel like because it’s so dark and so shitty and so rainy all the time people just huddle up. And it’s one of the few places in America, other than like New York, or something like that, where you can rent a warehouse space or you can play music in your basement, you know what I mean? You can have a practice space within your home. And you can hone in on something and not have to go rent a really hot garage and totally sweat your balls off every time you practice, you know what I mean? Where it becomes unbearable. You can just kind of work … and create.

Cheveyo: Experimentation is also highly praised in Seattle, I noticed. Like, if it’s weird, people don’t just walk away. They want to know why it’s weird.

Schowe: A lot of ‘weird’ bands in San Antonio are just looked at as, ‘Oh, that’s fucking weird. I don’t wanna watch that.’ It’s not like, ‘Oh, this is weird, I should totally see what’s gonna happen next.’

How much do you attribute a band’s success to the old adage, ‘It’s all who you know?’

Cheveyo: There’s something to that, but, I think, if you’re a jerk, it doesn’t matter how good you are, no one’s gonna work with you. And if you’re nice, then you’re gonna meet all these people who do all these things and they’re gonna talk highly of you. And then you meet more people and it definitely becomes that sort of a game. And I don’t mean like if you’re just fake nice.

I mean, if you’re humble about what you do, supportive about what other people do, you’re just gonna meet a lot of people and I’ve noticed that the ones that run the labels and stuff aren’t with their nose up in the air. They’re just regular nice people who go to shows, and you see them all the time and you don’t know that that’s what they do for a living.

That definitely helps with the success of bands in Seattle, because there’s a few pretty big indie labels there and they make it a point to promote form within the city.

Dræmhouse is currently working on a new full-length record, following the release of their recent EPs Only Friends and Woundlicker, and will be performing at 502 Bar this Friday, April 8 with The Cave Singers.