Punk’s Not Dead: The Ten Eleven Roars Off into the Night

I’ll keep this short and sweet, lest it turn into a bitter and (perhaps) out-of-touch tirade about the unfair unsustainability of DIY music/art spaces and the lack of sincerity, vision, and (frankly) love that people put into nurturing the arts, locally and otherwise.

Last weekend, on Friday and Saturday night, healthy crowds of unhealthy San Antonians flocked to 1011 Avenue B to celebrate the legacy of The Ten Eleven, which was officially hosting its final shows. After eight years operating as the city’s preeminent DIY music venue, under business partners and rock lifers Brandon Hicks, Jordan Williams and Colin Wells, the venue is changing hands. Longtime barkeep/sound guy/promoter/chill bro Michael Carrillo will take over the venue from here on out. And, while it may look and feel a lot like The Ten Eleven for a short spell, Carrillo will ultimately be giving the spot a new name and a new style. 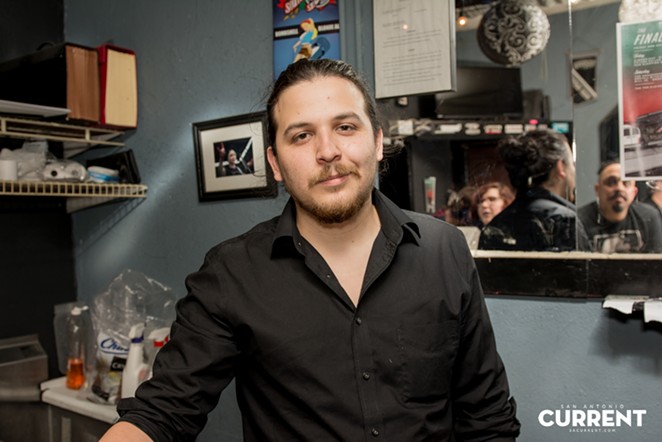 That the crowd was high on nostalgia, camaraderie and rock 'n' roll abandon Saturday night was no surprise. It's par for the course set over the past eight years: you went The Ten Eleven if you gave a fuck about music and the communities that surround its creation and performance. If you cared about organic herbal cocktails or a slick environment or being seen (not to be confused with being scene), you went somewhere else.

On the official final night of The Ten Eleven's glorious run, we caught performances by Bill Jr., Make Your Own Maps, Prevail Within and The Grasshopper Lies Heavy. Each of these sets seemed imbued with a special sense of urgency and a heightened sense of the value of music in people's lives — or maybe I just imagined that.

I was impressed by Bill Jr., who I had never had the pleasure of seeing before. The group served up some greasy, southern-fried punk rock with a decidedly swampy twang.

Make Your Own Maps, for my money, provided a great chance to head out back and enjoy the sights and sounds of the old Ten Eleven backyard by the river. People watching on the museum reach may never be this interesting again. Also: goddamn, they're ALWAYS getting down at the VFW!

Prevail Within, I might argue, stole this show. Featuring the venue's departing owners Brandon Hicks (lead vocals) and Jordan Williams (guitar and vocals), Prevail Within certainly took to the stage like they owned the place. And, in between sincere thank yous and fond reminiscences from the impressive Hicks, Prevail within crushed their set with a vital and earnest brand of fuck-all pop-tinged punk rock that made me remember just how much I used to love Cursive. It also felt like this was the exact kind of music, distrustful and angry and yet full of hope and fight, that this place was created to foster.

The Grasshopper Lies Heavy, who Hicks gushed was "the perfect band to close this place down," played last. The band, which has performed almost exclusively at The Ten Eleven (at least while in SA) for several years, can be said to have grown to its current world domination status at this venue. And, though he's not usually one for sentimentality, James Woodard, Grasshopper mastermind, remarked on how the place became a second home to him.

The band's set, one of the best I've ever seen them deliver (and that's saying something), was as punishing and excruciatingly intoxicating as ever (maybe louder than ever). The Grasshopper, an avant-garde sludge-metal deconstructionist outfit, always shines in the live setting. It sometimes feels like the band is playing from the inside of your stomach when they really hit their stride. For me, the experience is so mesmerizing and paralyzing that it feels like I'm moshing without even moving. It's a head trip, but I digress.

Suffice it to say that The Grasshopper Lies Heavy closed down the place in a way that only it could, flailing bodies of moshers and headbangers in an ecstasy that seemed near-religious. As the band closed its set with a crowd favorite ("Golden Road," from an old split EP with Sohns), it was clear that everyone — from bands to owners to show-goers — had given it their everything, left it all out on the field, so to speak.

We will report further on the forthcoming overhauls — most pressing among which, at the moment, include adding air-conditioning, getting a liquor license and a new paint job — as solid information becomes available. For now, let's all try to remember, celebrate and hold in our tiny black hearts the real reason The Ten Eleven was so special: it was a bullshit-free zone where you could be yourself, where beer was cheap (because it's only a means to an end), where the music was more important than anything else, and where people of all ages and walks of life could come together.

And, let's give Michael Carrillo some time with the facelift and next christening. There's money to be saved up, concepts to clarify and important (boring) red tape to be danced through. For what it's worth (and I think it's worth a whole lot), there's every indication that Carrillo's vision for the place is perfectly situated somewhere between reverent preservation and the quest for reaching max potential.