Culture Club to Tour with Original Members, Heading to the Tobin 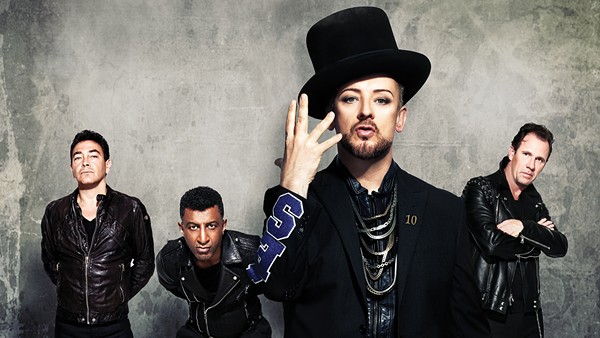 Perhaps one of the most diverse pop groups in history, the band, consisting of a gender-bending Irish frontman (George), a black British bassist (Craig), a Jewish drummer (Moss) and an Anglo-Saxon guitarist and keyboard player (Hay), chose the moniker that would serve them in their rise to fame based on the revelation of their heterogeneity. (Trump supporters scratch heads here).

With instant melodramatic classics such as "Karma Chameleon" (god bless that harmonica – makes the whole tune), "Do You Really Want to Hurt Me," "Time (Clock of the Heart)" "I'll Tumble 4 Ya" (there's that digit in the song title we were expecting) and "Church of the Poison Mind," Culture Club were at the forefront of not only pop music, but the wave of homosexual representation in the mainstream media in the '80s, something many in positions of power attempted to ignore or shame into obsolescence.

I can't wait to experience the kind of jubilant Pride parade this show is gonna be! Boy George, no stranger to pageantry and showpersonship, is not one to disappoint. Particularly as his latest forays into the pop world have been working with such luminaries as Antony Hegarty, Groove Armada and Afrika Bambaataa.