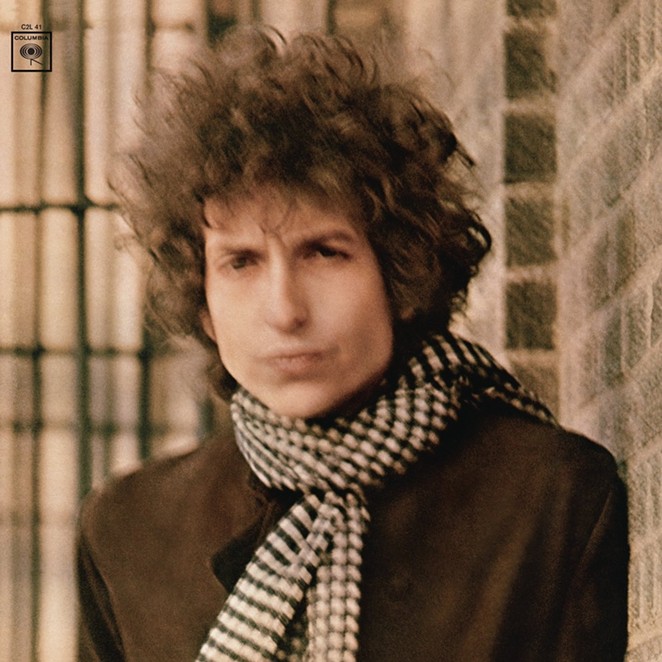 The magnum opus of Dylan's so-called "wild, thin mercury" sound, Blonde on Blonde was the final surrealistic statement from Dylan before the motorcycle accident, his subsequent disappearance into manager Albert Grossman's Woodstock estate, the birth of his children and his re-emergence as a bible-quoting family man with John Wesley Harding (1967), Nashville Skyline (1969), Self Portrait (1970) and New Morning (1970).

Released on this very day (May 16) in 1966, the double-LP is considered Dylan's greatest work in the phase between his Huck Finn-meets-Woody Guthrie solo period and the mellow offerings found on the aforementioned records, released post-'66. Dylan has been famously quoted saying that the elusive sounds he heard in his head were never better committed to wax than on the three records Bringing It All Back Home (1965), Highway 61 Revisited (1965) and Blonde on Blonde (1966), all written and recorded in the span of a speed-fueled, burgundy-battered 14 months.

Here's a breakdown of the 14 brilliant tracks that make up the pièce de résistance of the second stage of the ever-evolving singer/songwriter's canon, produced by none other than Bob Johnston, a sonic poet in his own right.

"Rainy Day Women #12 & #35"
Originally tailored down to 2:26 from its full 4:36 length, this cut, which features members of Dylan's backing band made up of The Hawks (later The Band) and Nashville session players, is one of Dylan's kitschiest and most recognizable. The song is a simple blues, ransacked and riot-ed up with the inclusion of numerous brass instruments employed to conjure a Salvation Army sound, said to be the idea of producer Bob Johnston. The pinnacle of each stanza comes as Dylan drawls "Everybody must get stoned," followed by the hooping and hollering of the supposedly intoxicated players in the studio, an assertion that has been challenged by scholars and session musicians present for the take.

"Pledging My Time"
Another blues from Dylan, this mid-tempo number is a perfect representation of Dylan's surrealistic prose placed over the classic twelve-bar form of the genre. The ensemble playing on the track consists of The Hawks' Robbie Robertson, who had been backing up Dylan throughout the last couple tours on lead guitar, Hargus "Pig" Robbins on piano, a Nashville session icon and Kenny Buttrey on the drums, giving the track a decided Chicago blues sound.

Interestingly, for a glimpse of the similarities in blues, compare the tune with Robert Johnson's "Come On in My Kitchen," Elmore James' "It Hurts Me Too," later covered by Dylan on Self Portrait, and the Mississippi Sheiks' "Sittin' on Top of the World." That's blues, baby: borrowing and stealing.

"Visions of Johanna"
This performance is the first glimpse of the gentle yet authoritative pining that contrasts the more movin' and rockin' numbers on the record. Much like "Just Like a Woman," "I Want You," "Fourth Time Around" and "Sad-Eyed Lady of the Lowlands," Dylan builds an alternate world of love, lust and self-reflection on the two, all the while rattling off some of his most celebrated lines of brilliant nonsense.

"One of Us Must Know (Sooner or Later)"
And just like that we've got a contender for one of the best breakup albums of all time. In what would become typical Dylan kiss-off fashion, the 24-year-old laid down some of the best be-cool lines and lyrics on this LP. In effect, addressing his desires and passions but tossing them aside with very little care; disposing of the parts of himself that once felt the heat of love lick at him like a fire crying in the sun. It ain't cool to care, baby. Movin' on.

"I Want You"
There isn't much to say about this number that can be expressed outside of the track itself. Simply put, one of the greatest lovelorn numbers from Dylan and the pantheon of American pop music. With Dylan's monotonous recitation he allows for the band and the arrangement to really tell the troubled tale of his infatuation. Here the band sets the bar on sentimental lusting. Sublime.

"Stuck Inside of Mobile with the Memphis Blues Again"
One of two epics on the LP, "SIoMwtMBA" is an ensemble accomplishment. For a little over seven minutes, Dylan recounts the troubles of a cast of absurd friends and foes: senators, tea preachers, grandpa, the rain man, Mona, railroad men, mama and more. By chorus three, anyone with a pulse should have caught on and be wailing into the wind "Aaaahhhhhh, mama, can this really be the end? To be stuck inside of Mobile with the Memphis blues again?" If you can keep the goosebumps contained as Dylan recites "Your debutante just knows what you neeeeed, I know what you waaaannt," you've never been propositioned by a home-wrecking sexual savage, real or imagined.

"Leopard-Skin Pill-Box Hat"
Another blues, "Leopard-Skin Pill-Box Hat" shows Dylan's gift for humor and biting snark. The track, rumored to be about Warhol muse Edie Sedgwick, among others, contains hilariously dry stanza after hilariously dry stanza. Consider, "Well, you look so pretty in it / Honey, can I jump on it sometime? Yes, I just wanna see if it’s really that expensive kind / You know it balances on your head just like a mattress balances on a bottle of wine / Your brand new leopard-skin pill-box hat." Cool-headed and cold-blooded, that Bobby D.

"Just Like a Woman"
Despite the initial feminist reaction to the reductive chorus, the lilt of Dylan's voice and the contemplative band accompaniment makes this the sister side to "I Want You." That is to say it's too sensitive and sincere to really be any sexist tirade from Bob. Just listen to how he croons "Queen Mary, she's my friend / Yes, I believe I'll go see her again." Also rumored to be about Edie Sedgwick, this is the perfect track for burning a number with your crush on your bedroom floor at 3 a.m., if you ever get the opportunity.

"Most Likely You Go Your Way (And I'll Go Mine)"
Here we go again, Dylan pens a cool-as-can-be kiss-off of some former fling. Let me be the first to draw the parallels between Beyoncé's Lemonade and Dylan's Blonde on Blonde; both righteously pissed but poignantly executed musings on being done wrong and moving on.

"Temporary Like Achilles"
Another blues and a perfect sauntering piano driven number best suited for a stroll over the bridges of Madison County in a Studebaker. I know you're never gonna find yourself in that situation, however, Dylan very well could have and it shows on this track that shares its sentiment, as well as its meter and pacing, with "It Takes a Lot to Laugh it Takes a Train to Cry."

"Absolutely Sweet Marie"
"Weeeeell, your railroad gate, you know I just can't jump it." Dylan's out, scrounging around for a leggy fling with a flirty little thing. Someone to blow the blues away (pun intended). A good time gal and a friend. It contains one of Dylan's most-quoted lines regarding his political philosophy: "To live outside the law you must be honest." You know that shit's true.

"Fourth Time Around"
One of the finest breakup tunes on this or any other LP, "Fourth Time Around" is famously based on The Beatles' "Norwegian Wood" (and you can hear it in the 3/4 time signature), which was, coincidentally, the fab four's attempt at writing a Dylan tune. Another rapturously emotive line from Dylan, "Uuhhh, Jamaican rum / and when she did come / I asked her for some."

"Obviously 5 Believers"
Perhaps the most obvious "borrowing" of a canonized blues number shows up on this remake of Sonny Boy Williamson I's "Good Morning Little School Girl" and Memphis Minnie's "Me and My Chauffeur Blues," which features the same riff utilized to great effect by Robbie Robertson's guitar and Charlie McCoy's harmonica. This borrowing and stealing is one of the basic elements of folk music and has been a source of great frustration for Dylan, as it is one of the main reasons he is often accused of plagiarism, along with lifting lines from poetry and literature. Music critic Robert Shelton accurately described this as the best R&B joint on the whole album. I'd say so.

"Sad-Eyed Lady of the Lowlands"
Like "Stuck Inside of Mobile With the Memphis Blues Again," at 11 minutes and 19 seconds, "Sad-Eyed Lady of the Lowlands" is not just the perfect epic to close Dylan's single, stoned and speeding years, but a lullaby that lulls you into its honey-smooth sweetness. Al Kooper's organ creates a swath of tenderness that aids in oh-so-tenderly stomping your heart into pieces. The backing band was not told how long the piece was going to be, so enjoy the comical build-ups and exaggerated would-be releases as they move along behind Dylan's lead, perpetually starting another verse, 10 in total. Interestingly, upon playing the tune for Robert Shelton, Dylan stated that this was "the best song [he'd] ever written," up to that point.