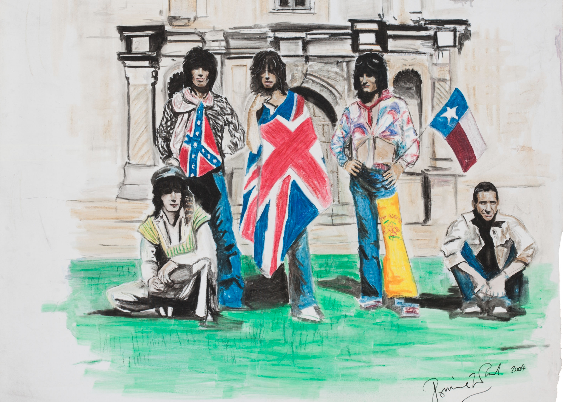 The lead guitarist of The Stones since 1975, Ronnie Wood, Woodie to his bandmates, is apparently not just handy with a six-string. The axeman, who yesterday (May 30) welcomed twin daughters Alice Rose and Gracie Jane into the world (and at 68, no less), also has one of his paintings up for auction in this month's issue of Heritage Auctions.

The huge 20-by-20 foot painting depicts The Stones standing in front of The Alamo. The painting includes Bill Wyman in coonskin cap, fellow guitarist Keith Richards with the Confederate Flag sprouting out of his southern region, Mick Jagger draped in the Union Jack, Woodie in halter-top and holding the Texas flag and Charlie Watts, in typical Charlie form, seated, legs crossed and looking decidedly unaffected.

The painting is dated 2004 but shows The Stones circa 1975 on their Tour of the Americas. The painting is based on a photo by Ken Regan and the bidding starts at $10,000. The auction ends on Saturday, June 25. You can bid on the painting here. Good luck, stoners.