Kevin “The Rat Race Kid” Kosub is quite the character. With a George Jones flat-top, a voice raspy enough to clean sink drains and a penchant for collecting the controversial castoffs of America’s checkered past, the leader of local rock ‘n’ roll group The Blacktears and curator of the Sir Douglas Museum is an accomplished San Anto scenester. His small bachelor pad, affectionately referred to as the East Side Trauma Center, is tucked away off of W.W. White road and comes complete with a porch perfect for breeze-shooting, various Southern trinkets — from Richard Nixon buttons (the best is a DNC pin reading “Lick Dick in ’72”) to George Wallace magazine covers — and a shrine to the late, great San Antonio musician Doug Sahm.

Kosub is also one of the city’s premier record label executives. His label, Kevin Kat Records, has sold over 50,000 releases from many of the city’s finest musicians, from Kosub’s own group to Augie Meyers, Johnny Cockrell, Frank “The Wild Jalapeño” Rodarte and the legend himself, Doug Sahm. He’s also a friend to many of the city’s legendary musicians and a collector’s collector. Not only does Kosub maintain the Doug Sahm museum, which houses rare photos, personal items, treasured memorabilia and the obscurest of musical releases from the master musician, he also fills his humble abode full of pop culture paraphernalia that he finds fascinating and delightfully contradictory, a “clash of extremities.” While standing next to a racially charged porcelain caricature of Louis Armstrong, Kosub tells me of his affection for Satchmo, “the man who invented pop music.” However, his main person of interest, without a doubt, is Sahm.

I asked Kosub, a man who has seen the some of the best musical performers of the last 60 years why it's Sahm that's captured his attention.

“When you see performers like [Charles and Little Richard], it gives you a whole new perspective of what your act is, what your act ain’t and what your act ain’t never gonna be. When you see masters, well, that’s what I saw in the [Sir Douglas Quintet]. Masters … Ever since, the Mavericks, the Blasters, everybody somehow tried, but none of ’em, none of ’em will ever do it like Doug and Augie … And Doug’s voice. A voice. A voice! He’s got a voice as good as Johnny Mercer’s, Bobby Darin’s, Frank’s — this is all my opinion … He does [Louis] Prima, he did it all. And he also did English rock for a couple of years (laughs uproariously) … So, yeah, I dig it.” 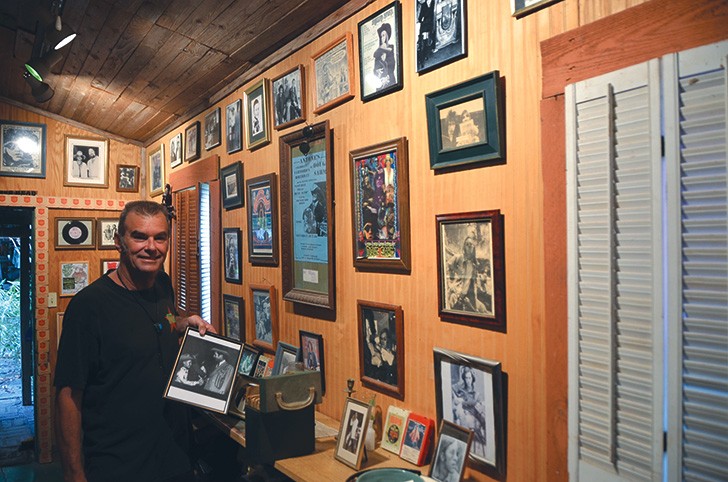 The museum is a small hallway-like room off to the side of Kosub’s house, but what it lacks in size it makes up for in content. There are pictures of Sahm’s two Rolling Stone covers (one autographed, naturally) and candid shots of Doug with Jerry Wexler, Bob Dylan, and Hank Williams. The museum also possesses a pair of Sahm’s famous round-frame shades, a gift from Doug to Arturo “Sauce” González who later gave them to Marcelino “Coke” Martinez, numerous rare concert and album posters, several pictures of Kosub and Sahm together and roughly 30 of Sahm’s albums, from the obvious to the most obscure, including the coveted Renner recordings from Telarc label owner Jack Renner.

As for Kosub’s own band, a former Taco Land staple that will headline a Kevin Kat Records’ show at Southtown 101 Sunday, June 19, Kosub gets a little sentimental.

“I’m happy to be alive. To get to this point I had to lose a bass player, I had to lose a guitar player, I had to lose Sam Baird, our harmonica player, Charles Walter … We lost him. But, I kept Charlie, I kept Steve [Mallett], I kept Doug, I keep ‘em in print. Because what Kevin Kat Records label is, [is] a musical history book of 36 years now … There’s just so many people. I could go through the list of how many people that are on there that are no longer here. But, hey, that’s rock ‘n’ roll. If you’re gonna start a rock ‘n’ roll band, buy a black suit because you’re going to be going to some funerals.”

Much like Kosub's old friend, (in)famous local curmudgeon and Taco Land owner Ram Ayala, colorful catchphrases and off-the-cuff one-liners emanate from his mouth. He moves back and forth between Spanglish, old Ram colloquialisms and conspiracy theories, all the while showing his diverse EP collection and discussing his love of Johnny Mercer and Jimmy Reed.