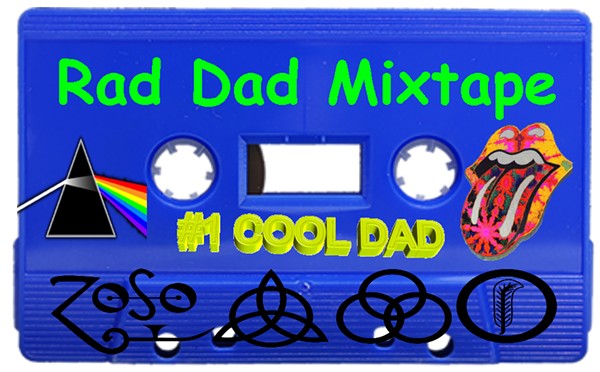 Father's Day goes way deeper than "World's Greatest Dad" t-shirts and Grill Master Bar-B-Qs at the family pool party, a holiday dedicated to celebrating that special guy in your life.

When dads everywhere aren't pretending to vibe to the Kanye Wests and Taylor Swifts of the new millennium, they sneak away to their dusty vinyl collections stashed in dad caves across America.

So, for this Father's Day weekend, hand dad the AUX chord and let him be the DJ. Here's our stab at some dad-friendly jams to start your weekend:

Led Zeppelin, "Over the Hills and Far Away"

Lets face it, most dads who jam to Led Zepp are over the hill. But, like most dad rock songs, that doesn't mean that anyone who was born past '79 can't enjoy it. "Over the Hills and Far Away" is the kind of jam that hearkens back to the days of fantasy adventure before Peter Jackson.

It may be creepy to imagine your dad singing "Ooh, I need a dirty girl" to your mom at the high school prom. And, because you exist, it's a fact that dirty dog got lucky.

The Who, "My Generation"

Before playing the Who, imagine the spirit of a KZEP (RIP) disc jockey grousing, "This goes out to all the classic rockers who've had enough of cellphones, Miley Cyrus and goddamn vaping."

Blue Oyster Cult, "Burnin' for You"

Even though "Burnin' for You" wasn't the subject of a SNL skit, this probably gets the "midnight toker" dads riled up before a bedtime bowl. 420 is for life.

When the "Mommy's alright, daddy's alright" chorus kicks in, it seems a little ironic that dad's still jamming to the CT hit, even though the role's now reversed. Seems a "little weird."

This ye olde Queen song's a hit with dads who've heard "Bohemian Rhapsody" one too many times and they probably get a snarky satisfaction that 95% of the general public's never heard "Doing Alright" before.

If your dad enjoys bombastic, intricate instrumental breakdowns, then yes, of course he loves Yes.

And if Yes is your dad's shit, then he definitely has some ELP in his vinyl collection, too.

Pearl Jam's proto-Moses rock hit is the most recent song on this playlist, but that doesn't mean it ain't daddy certified.

This is it: the most dad-centric song of all time. If you can't imagine pops cracking open a tall boy to early Rush, your dad's just not bringing home the bacon.