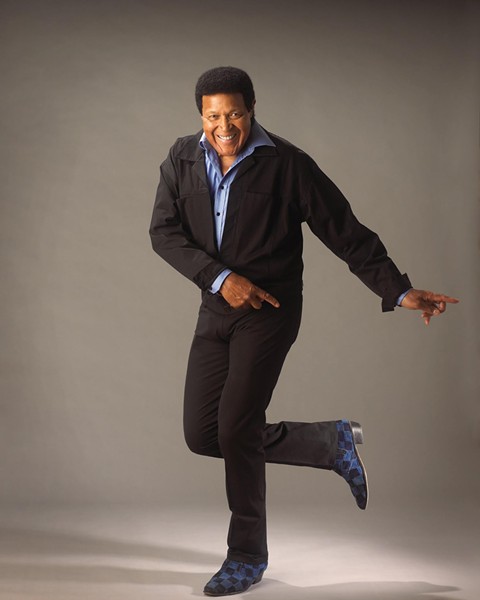 Born Ernest Evans in 1943, the seeds for Chubby Checker's incredible career and lifelong love of music were planted at a very young age. Upon seeing country legend Ernest Tubb, Evans was so moved by the Texas Troubadour and the other live acts he witnessed that he founded his own street harmony

group in Philadelphia at the age of eleven, and soon thereafter took piano
lessons.

By high school, he’d refined his group as well as his skills on the ivories and found great joy in entertaining his fellow classmates with hits from many of their favorite artists, along with songs from some of his own heroes like Fats Domino, Jerry Lee Lewis and Elvis Presley. His impressive skills caught the attention of the owner of the meat market where Evans worked and earned the nickname "Chubby," from the market's manager. The owner in turn introduced Chubby to his friend at Cameo-Parkway Records, which led not only to a record deal, but to a recording session with Dick Clark and the first of several appearances on his wildly popular musical variety show on ABC, American Bandstand.

The first appearance took place on May 23, 1959 with the performance of a song entitled "The Class" – a fun and upbeat dance tune about a teacher desperately trying to wrangle in his class, complete with vocal samplings influenced by the high-pitched sounds of Alvin and the Chipmunks. However, it would be his appearance a year later on August 6, 1960, performing a song entitled "The Twist," that would catapult him into a new realm of fame.

Officially written and performed by Hank Ballard and the Midnighters, the true origin of the song is a little mysterious. Abdul Bin-Asad (formerly Lawson Smith), one of the original members of Hank's band, recounted in a 2014 interview a songwriter named Nathaniel J. Bills pitching the song to the group while they were in Tampa Bay after being referred to them by the Spaniels, who felt the song's title and content was too suggestive for their own squeaky clean band. A deal wasn't officially made between Hank and the Spaniels, but nevertheless, the Midnighters had the song recorded in Miami on the following day.

The catchiness of “The Twist” caught the ear of one of Dick Clark's DJ acquaintances who recommended it for the show. Clark in turn presented the song to Checker after being unable to book Hank Ballard. Checker not only obliged but exploded it to new levels with his charisma, smile, and powerful vocal presence. There was a confidence and edge to his performance that meshed perfectly with the raw sounds of rock ‘n’ roll currently seducing the nation’s youth. However, his sweet innocence and friendly tone combined with his bouncy and care-free moves also played a significant hand in his version of "The Twist" soaring to number one in the charts and taking both adult and teenage dance halls across the land by storm. Such shaking required two dance partners to gyrate apart from each other, which – although quite widely seen nowadays – was beyond revolutionary for the time. This of course would have a profound effect not only upon the later dance hits he would have throughout his career, but the evolution of popular music throughout the decade and beyond.

Fast forward to June 25, the halls at the Tobin Center will be shaking – or more appropriately, full of folks twisting with delight – as Checker brings his legendary act to town with a slate of his top dance numbers and new compositions sure to spur a great deal of foot tapping, body shaking and smiles as attendees of all ages dance apart, together.