Khan Man: Prepare to be Dazzled by King Khan and the Shrines 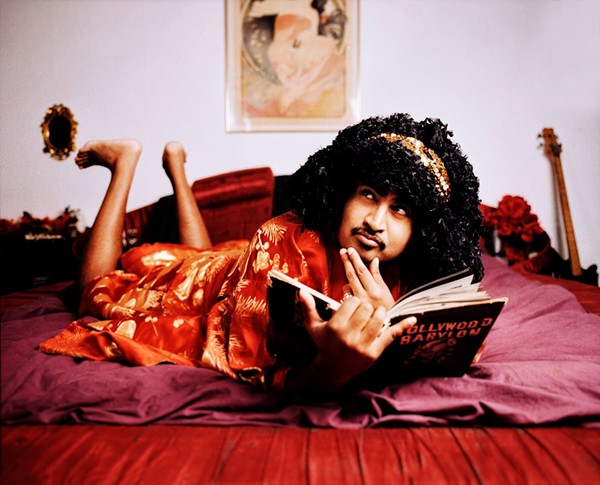 Don your bedazzled cape and some electric blue lipstick and take an extra large bong rip because King Khan and the Shrines are gliding into town on what I can only imagine is a magic carpet. The musical marauders will be performing the second to last show for their tour in the Alamo city before a finale in Houston.

Founded in Montreal by frontman Arish Ahmad Khan (King Khan), the Berlin-based band has been producing uncanny rock ‘n’ roll gems since 1999. With eight studio albums under their belt and a myriad of collaborations and side hustles, the nine-piece group shows no sign of stopping their LSD-laced psych journey.

Occasionally called King Khan and His Sensational Shrines, the music they churn out is as spectacular as the band’s name, evoking images of colorful landscapes and collages of carnies. But it’s their live shows that the Khannibals come out for. Think Aretha Franklin meets Of Montreal, deep soul meets John Waters and Divine or maybe southern style Black-eyed Peas meet, well, black eyes. It’s a kaleidoscope-like palette of garage rock fueled mosh pits, fully equipped with go-go dancers, harmonic melodies and wacky brass ensembles. It truly is an unforgettable experience.

But let’s get back to the music. The Shrines are well-seasoned musicians, many of whom perform solo or in other groups, most notably, King Khan himself. The namesake’s musical roots date back to mid-nineties Montreal when he performed with lo-fi punk band The Spaceshits under the moniker Blacksnake. Khan eventually went on to form two-man band King Khan and BBQ Show with previous Spaceshits member Mark Sultan. He has also collaborated with RZA of the Wu-Tang Clan, Bloodshot Bill and the Black Lips.

Over the course of 17 years, King Khan and the Shrines have pooled together their various skills, drawn from countless springs of inspiration and created a
concentrated and boisterous discography that holds its own and has served to
inspire fellow garage rock vagabonds like Ty Segall, Reigning Sound and
Nobunny. Songs like “Luckiest Man” and “Bite My Tongue” off the band’s 2013
album Idle No More, seem to take a page from The Monkees’ book while juxtaposing that sound with instrumental breaks that resemble those of ska-punk band Reel Big Fish. Conversely, 2004’s “Mr. Supernatural,” one of the band’s earlier ventures, sounds like something you’d listen to at 10 am the morning after. The memorable track “On a Brass Bed (In Paradise),” is a New Orleans funeral meets Marc Bolan’s T. Rex. It’s faux fur and gold eyeliner meets washboard back alley blues and it’s unlike anything coming out the gate these days.

In fact, that remains the theme with King Khan and the Shrines; an over-the-top, misunderstood yet unashamed band of glitterati that’s all over the map and honored to be. And while Khan and his whimsical troupe of melodic magicians have evolved since their inception nearly two decades ago, they’ve continued to forge ahead in pursuit of outlandish and funkadelic smoke shows.