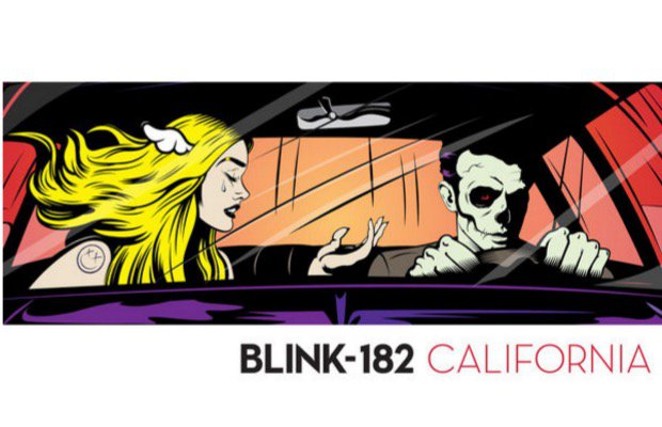 No, Blink-182’s new album wasn’t the best record to come out on Friday, July 1 — Maxwell, Bat for Lashes and Thee Oh Sees all released new work with more staying power than the pop-punk trio. But Blink-182’s California does make a three-pronged case as the most interesting one.

Right out of the gate, there’s the absence of guitarist and singer Tom Delonge, who revealed in June that he quit the band to study UFOs. “ I can't tour nine months out of the year with enough time to do the enormity of what I'm setting out to do,” he told Mic. (If there’s one music interview worth reading this year, Delonge is it. He criticizes SETI’s “own way of doing things” and promotes the idea of a “new space program that's part exploration and part defense”). Thus, bassist Mark Hoppus, arguably the better of the band’s OG singers, carries us through the record.


Second, there’s something weirdly captivating about 40-year-olds releasing pop-punk records. Not to succumb to ageism, but pop-punk is a young man’s genre. It’s a bit strange to imagine someone with a 401k writing songs like “Kings of the Weekend.”

Third, Blink-182 is truly an influential band. When the three-piece emerged from San Diego County in the mid-’90s and took an intensely sweet blend of pop-punk to the top of the charts, raising the tide for acolytes in the genre like Sum 41, Jimmy Eat World and New Found Glory. It’s no stretch to imagine the current generation of pop-punk spending their after-school afternoons slurping down TRL videos of the band like Capri Sun.

With their first record in five years, Blink-182 aims to prove — despite the ageism, influence and abduction of Tom Delonge — that they still have it. Writing a record about California is a good place to start. Like tech startups or the bulk of American produce, California is the golden land of pop-punk’s overdriven guitar and compressed vocals. From Blink-182 to FIDLAR, Descendents to Social Distortion, pop-punk’s finest have been inspired by the state’s endless summers and suburbs.

So it’s a shame that Hoppus and company can’t piece together a few new ideas on their home state. With California, too often the ideas are boilerplate and the production is heavy-handed. Yogi Berra-isms like “life is too short to last long” and gag-inducers, including “like the music scene, you’re fake yah,” don’t quite pack the punch of the Hoppus/Delonge tradeoff of yore. For anyone waiting for a late-era hit to join the catalogue of Blink-182 singles to throw on after a night of drinking with friends from high school, they’ll have to keep waiting.

So, that’s the bad stuff. The good? Travis Barker can still rip. As new guitarist Matt Akiba throws down pastiche guitar slides, Barker hits the drums like a man working out his demons.

A second positive lies in the fact that 40-year-old men can make lots money acting like teenagers. Joan Didion, who saw California with an unmatched clarity, wrote that “the secret point of power and money” is “absolute personal freedom, mobility, privacy. It is the instinct that drove America to the Pacific.” Now that Blink-182 has been there for two strong decades of unforgettable singles, forgettable albums and mansions full of money, they’re a shining example for anyone wishing to live in an endless, nameless, “nobody likes you when you’re 23” state of bliss. Or, for anyone who wants to write a song called “Brohemian Rhapsody.”