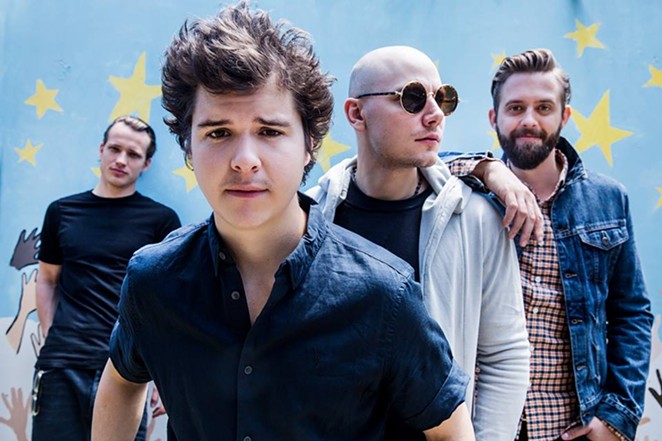 Have you ever driven home from your 9-5 in the heat of rush hour and realized that you forgot the AUX cord or CD collection at home? And in an effort to keep your sanity, you're forced to turn to the last resort: the radio. You mess around with random stations until you come across "San Antonio's #1 Hit Music Station" Mix 96.1 FM. You're forced to listen to the same seven songs in a contentious loop and, at that exact moment, you know what Hell is — and what it sounds like.

In its 2016 edition, MixFest has recruited five up-and-coming artist from the pages of Tiger Beat magazine and will force them to sing their one-hit for an audience of proto-angst tweens. Headlining the concert is Lukas Graham with Bebe Rexha, Jacob Whitesides, American Idol contestant Steven Curd and House DJs Jump Smokers. There's no shame if you're older than 15 and said "who?" to any of the acts.

Even after scoring platinum with the most un-fun song of summer 16 "7 years," Danish band Lukas Graham is serenading San Antonio with a "75 minute show." With a concert that clocks in around the same time as a raunchy Zac Efron comedy, expect 70 minutes of songs unheard on the radio with the promise of that number one hit saved for the last five minutes. Encore?

Back to "7 Years." Major props are given to "What is Life: the Song" for sentimental self-reflective lyrics being sang over an overwrought symphony of pianos and strings with an added drum beat to keep things "edgy" and "radio-friendly." But it still seems like a downer anthem especially when chilling at summer hot spots like pool parties and Fiesta Texas. It's not possible to supersoak the shit out of your friends when lead singer Lukas Graham Forchhammer sings surprisingly dark lyrics like "I hope my children come and visit once or twice a month" when he's "sixty years old,"  while pondering if he'd think the "world is cold."

If you haven't heard it roughly a million times, check it out below:

"Nobody Puts Bebe in a Corner"

Here's what we've been expecting, a fresh-faced teen ripped from the pages of teen magazine pulp: Jacob Whitesides is the epitome of a teenage dream.

Discovered on the X-Factor, the breeding ground for the current crop of popstars, Whitesides is reminiscent of Justin Bieber's "Baby" era - y'know, before the religious tats, monkeys, egging, barrage of dick pics and other classic Biebs moments. But Bieber's edginess' made him a popstar you don't have to ashamed of listening to. Whitesides' cutesy and borderline Hallmark cheesiness on the other hand...