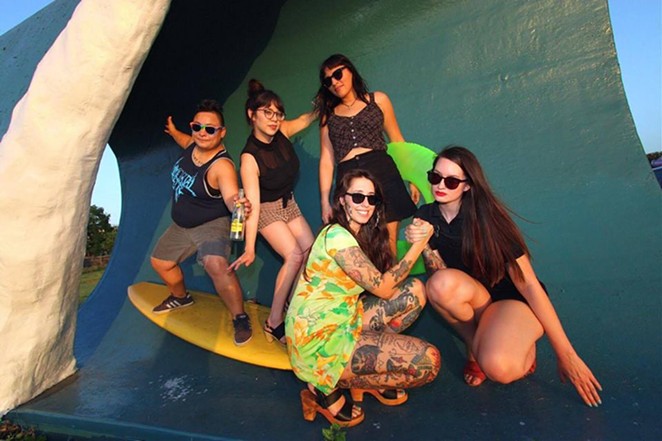 It's definitely a bit premature to laud a band before their first show, but for a diehard fan of Topo Chico such as myself, this San Antonio quintet won my heart before the start. On "Leopold," to a darling garage pop beat, Topo Chica voices a common question among cat owners: where do you hang out when we're not home? With Dreamland, Mobile Meth Lab, Dirt Lip. $4, 10pm, Hi-Tones, 621 E. Dewey Pl.

By a twist of G-funk fate, Warren Griffin III was responsible for introducing the lion’s share of LBC’s talent to greater Los Angeles and beyond. After playing his tape of 213 — the stacked trio of Warren G and Doggs Snoop and Nate — at a bachelor party hosted by his stepbrother Dr. Dre, the good doctor invited the crew to take a hit of The Chronic. G never joined the powerhouse of Death Row, but he was there for some of G-funk’s finest moments, from his “OG gangsta glide” on “Indo Smoke” to the production of Tupac’s “Definition of a Thug Nigga.” Then, of course, there’s “Regulate,” a smoky street anthem so synonymous with the era that if you buy a six-four Impala off Craigslist, the seller is morally, if not legally, required to include a copy of the ’94 single along with the car’s title. $25, 7pm, Alamo City Music Hall, 13o5 E. Houston St.

In anticipation of a weekend of ringing ears and sunburned necks, KRTU is teaming up with Float Fest for its second-ever live broadcast event at Paper Tiger. If you wanna do your homework on some of the local acts that sit a little further down the Float Fest lineup list, here's the occasion. With doors opening at 8pm and KRTU's broadcast of the show beginning two hours later, fans can catch three south Texas groups before they take the Sun and Water stages on Saturday.

Repping San Antonio, Pop Pistol is a Xicano three-piece band that's been making atmospheric rock in the 210 for more than a decade. And accompanying them on this very special KRTUesday are Austin’s 3x ‘Band of the Year’ Riders Against the Storm and electronic pop duo Holiday Mountain. Free, 8pm, Paper Tiger, 2410 N. St. Mary's St.

Last year, Polygraph's Matt Daniels released a gorgeous data visualization of rapper's vocabularies, ranking hip-hop's finest by the number of unique words used within an artist's first 35,000 lyrics. To no one's surprise, Aesop Rock came in first, with an impressive 7,392 words (DMX rounded out the bottom of the data set, with a Spartan 3,214). With his new album The Impossible Kid, Aesop Rock hones in with some of his darkest and most passionate material to date. With the like-minded and verbose Homeboy Sandman. $18, 8pm, Paper Tiger, 2410 N. St. Mary's St.