How to Make the Most of this Year's Float Fest 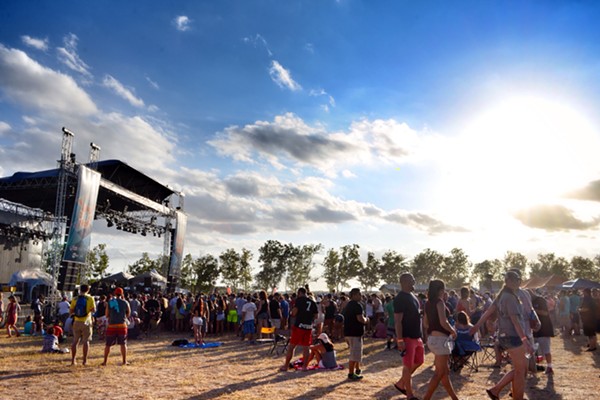 In an effort toward transparency, Float Fest should stylize its concert as “Float/Fest,” for the concert and tubing portions are separated like oil and water. Or liquor and river water, for a more suitable metaphor for the occasion.

Unfortunately, you cannot float down the San Marcos and flex to Rick Ross doing “Ima Boss” — unless you do so blasting the Teflon Don from cooler-speakers. Instead, Float Fest offers free shuttles for a tubing trip, ferrying ticketholders to and from the concert grounds at the Cool River Ranch. Now in its third year, we present our highlights for the two-day riverside bash.


Slim Thug
Saturday, 5:15 p.m.
To their utmost credit, Float Fest has shown a penchant for Houston rap, with this year’s nod going to Slim Thug. In 2004, the Swishahouse rapper held down the keynote verse on Mike Jones “Still Tippin’,” the song that put the national spotlight on the rap and slang of the City of Syrup. Fast-forward 12 years and international names like Drake and A$AP Rocky are still making hits off his style. But Slim Thug still maintains his slow ‘n’ low appeal — “Nevermind me, I’m just over here ballin’,” he sings on the hook of 2015’s “Nevermind Me,” the greatest humble-brag in the history of the form.

Bone Thugs-N-Harmony
Saturday, 6 p.m.
It’s a great time to be a Bone Thugs fan. With jail stints and internal conflicts marring the rappers’ 25-year career, all five members are back for 2016 and the impending twelfth album E. 1999 Legends. If you’re like me and like to get drunk and yell “Bone Bone Bone Bone” on cue with the Cleveland quintet and their g-funk whine, an intact BTNH lineup is like hearing the Fab Four are back together.


Future Islands
Saturday, 9 p.m.
The world would be a better place if everyone could find the joy and satisfaction that Future Islands singer Samuel T. Herring feels in his work. In 2014, a video of the Baltimore band performing “Seasons (Waiting on You)” went viral thanks to Herring’s all-in commitment to the song — including an odd, earnest Jitterbug and a questionable foray into death-metal growling. Grounded by charming bass lines, Herring overstated grunts and contortions and understated singing make him one of the weirdest and most captivating frontmen on the festival circuit — indie pop’s shaved-and-shirted answer to Iggy Pop.

Santigold
Saturday, 10 p.m.
On her new record 99¢, it appears that outsider pop star Santi White succumbed to the dollar and airplay demands of Atlantic, her big-wig label since the start. The record is her brightest yet, with a bubblegum stickiness filling the spaces where her darker moods used to be. But the sheen is deceptive. A quick look at the cover —Santigold shrink-wrapped with a bunch of dollar-store knick-knacks — suggests a meta-element to the sound. She’s doing squeaky-clean pop while digging at its commercialism. In the set, a walkthrough the record, plus highlights from the first two albums, should strengthen the Philadelphia rapper and singer’s claim as one of the smartest pop stars around.

Wild Moccasins
Sunday, 3:30 p.m.
If hip-hop is the resounding theme of Saturday’s lineup, Float Fest on Sunday is dedicated to the synth and lighthearted pop-rock. Wild Moccasins set the tone early on in the day, a Houston quintet dance-pop quintet led by the magnetic Zahira Gutierrez. On their 2014 album88 92, the band gets on the floor to spin Chic, Chromatics and LCD Soundsystem into something their own.

Rooney
Sunday, 6 p.m.
For the past six years, Robert Coppola Schwartzman has been on the Hollywood circuit, trying his luck onscreen and scoring films. Despite the family co-sign — his aunt is Sofia Coppola and mother is Talia Shire, better known as Connie Corleone — Schwartzmann has returned to his first love and supreme talent: writing heartthrob pop for teenagers. On the new Rooney albumWashed Away, Schwartzman and company split the difference between John Hughes teen-dreaming (their old product) and the live-fast attitude of Julian Casablancas. It’s a solid step toward maturity — a little less clean-cut, but not rushing to leather jacket territory just yet.

Chromeo
Sunday, 10 p.m.
Is Hall & Oates cool again? By the reception of Chromeo — a digital, millennial adaptation of the seminal ’80s pop cheesers — it appears that corny and delightful music has a place in the hearts of a new generation of dancers.

The duo of French Canadian childhood friends David Macklovitch and Patrick Gemayel began playing together in high school; by the time of their 2004 debut She’s in Control, the pair found an irresistible groove of electro-funk. Like peers Justice and Daft Punk, Chromeo flaunts a disco-inspired sound that you can’t help but like, even if you don’t want to.