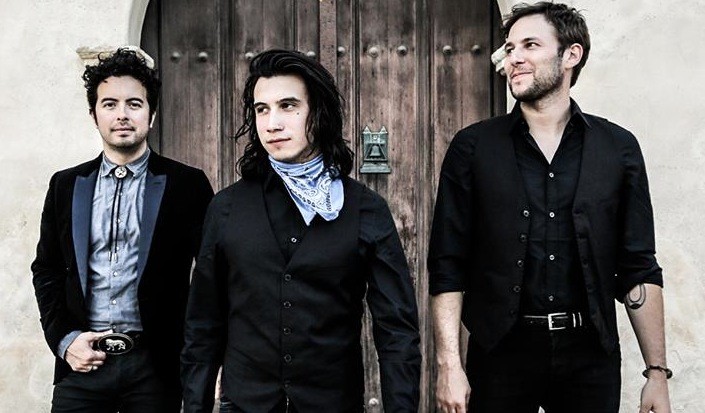 Last night, The Last Bandoleros played a Tex-Mex scorcher on Jimmy Kimmel Live, making their late night debut with “Where Do You Go.” Featuring San Antonio natives Jerry Fuentes and brothers Diego and Emilio Navaira IV, the band’s appearance may be the first time SA and tejano-rock has been featured so prominently on a major network since the Texas Tornados sat in with Paul Shaffer’s band in 1990.
On “Where Do You Go,” The Last Bandoleros certainly owe a great deal to Tex-Mex stars Doug Sahm and the Tornados. Anything with a backbeat that prominent and an accordion that rippin’ is going to be rooted in the tradition of San Anto legends Doug, Augie and Flaco. The young quintet also adds a major touch of early-Beatles harmony, pulling a page from the “Twist and Shout” school of candy-coated group vocals.

The Last Bandoleros formed in 2014 after the Navaira brothers and Jerry Fuentes moved from San Antonio to Brooklyn. (In SA, the Navaira pair played in the pop-rock band Ready Revolution, while Fuentes gigged under his own name.) As they told Billboard earlier this summer, “Where Do You Go” was the song that brought it all together. “It started as a writing project,” said Emilio Navaira IV. “As soon as that happened, it was like, ‘This is something else. It’s special. It’s a band.’”

In San Antonio, the Navaira name is most closely associated with their father, Grammy-winner Emilio Navaira. Known for his tejano and country records of the ’90s, the late Emilio earned a Grammy for Best Tejano Album with 2002’s Acuérdate. So when The Last Bandoleros call themselves “San Antonio-forged,” that’s a boast they can back up.