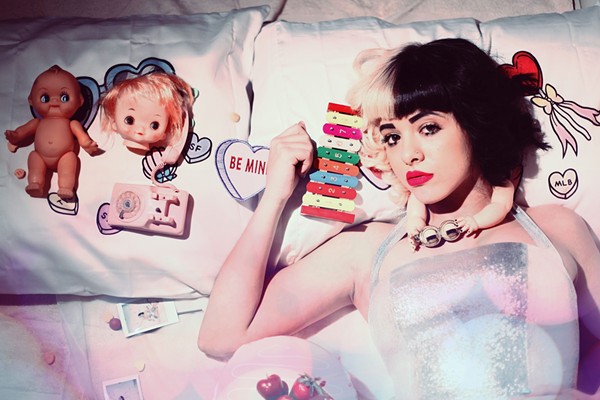 Even though she's not a household name yet, underground DIY pop singer-songwriter Melanie Martinez is poised to achieve the impossible: mainstream success.

Not without pop culture exposure, Martinez starred (and was voted off) season three of The Voice, and her song "Carousel" was featured in a promo for American Horror Story: Freakshow. Not bad for a 21-year-old singer with a Tumblr-slang aesthetic who might be best described as a Lolita who sucks on pacifiers in sexualized babydoll dresses and bibs.

But despite her cutesy style, which actually seems completely unmarketable in the current pop scene, Martinez's music could've only been penned by a big girl. On her debut concept album, 2015's Cry Baby, Martinez sings about reaching adulthood, drugs (both prescription and street), domestic abuse and murder with haunting sadness and sincerity over trip-hop beats and cinematic strings.

With a strong, hardcore online fanbase (self-described "Cry Babies"), Martinez's popularity and plenty of accolades, she's an anti-popstar who's never been spoon-fed. She directs the bulk of her bizarrely beautiful and surprisingly dark music videos while penning her own lyrics, proving that she's not a Voice reject.

Catch Melanie Martinez perform at the Aztec Theatre October 26 at 8pm. Ticket prices range from $25 - $40 and can be purchased here.