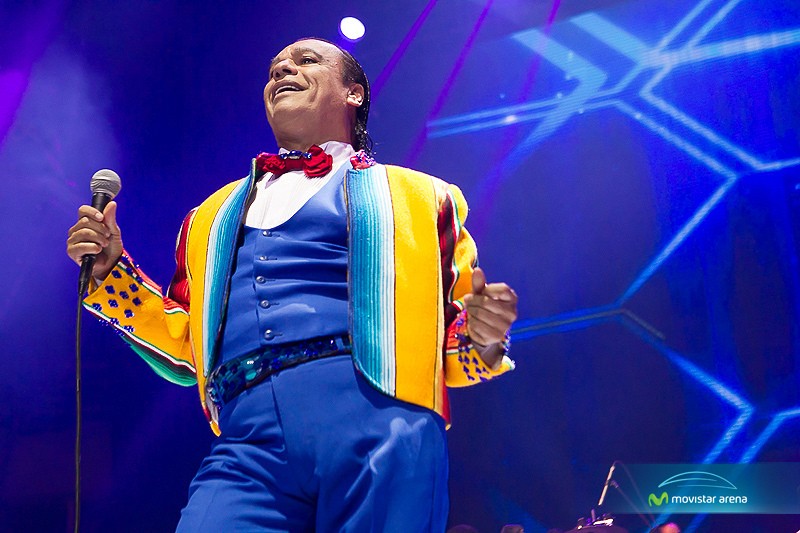 Juan Gabriel (born Alberto Aguilera Valadez in Michoacán, but raised from an early age in an orphanage in Ciudad Juárez, Chihuahua) was a lot more than a Mexican icon who wrote over 1,800 songs, sold more than 100 million copies of his 45 albums and died Sunday at age 66, after performing his last sold-out concert at The Forum in Inglewood, California on Friday. He was the Divo of Ciudad Juárez, but also The Border Bard.

“He was the voice of people on the border with big dreams and carrying a lot of pain in their hearts for what life has dealt them,” Rubén Martínez, an author and Literature professor at Loyola Marymount, told the Current over the phone from Los Angeles. For more than one generation of Chicanos, Gabriel's work in many ways represented borders, not just geopolitical but the blurred boundaries of genre and sexuality. His early hits, like "El Noa Noa" and "La Frontera," were classic border ranchera-rock. "And he was on the border in terms of sexual identity," Martínez said. "In his concerts, he would ask, ‘¿Quién se quiere casar conmigo?’ [‘Who wants to marry me?] And everyone, men and women, wanted to marry him, even the biggest machos!”

News of Gabriel's death exploded on social media, and there is even a Facebook page calling for a “March to revive-clone-hologramize Juan Gabriel,” scheduled for November 12 at Mexico City’s El Zócalo, launched by fans who “refuse to accept the death of the Divo.” Even Megadeth’s Dave Mustaine tweeted “I’m sorry for #Mexico losing this great musician.”

Juan Gabriel’s melodies were beautiful and clever in their simplicity, and the hooks genius: they would grab you and wouldn’t let go. Not only did he write for himself, but also for others whose careers exploded thanks to his songs. Marc Anthony, a once unknown Nuyorican whose only brush with fame was “Ride on the Rhythm” (number one on Billboard’s dance chart in 1992) has repeatedly said his life changed thanks to Juan Gabriel, and it only took one song. Asked by Ralph Mercado (then president of salsa label RMM Records) to do a Spanish-language salsa album, Anthony was unsure. He only decided to do it after hearing “Hasta que te conocí,” a major “Juanga” hit, during a cab ride in New York.

"I jumped out of the car and called Ralph from a pay phone," Marc Anthony said in 1996, for a story in the Los Angeles Times. "I told him that if I could record a salsa version of the song, I was willing to start recording tomorrow." The rest is history: Marc Anthony’s acclaimed salsa debut, 1993’s Otra Nota (produced by Sergio George) began the process that turned Marc Anthony into a superstar. Once again, there was Juan Gabriel to help out as he had done before for so many other artists.

Juanga was so big that he could stop recording for seven years (due to a legal dispute with his label BMG in 1986-94) without losing an ounce of popularity. But if there was Juanga the singer-songwriter, there was also Juanga, period. A larger-than-life persona who couldn’t be more opposite the usual Mexican macho stereotype; yet, everyone loved him, even rockeros whose music had (apparently) little to do with Juanga’s pop melodies. Just listen to “Querida,” a 1992 ska-punk cover by Maldita Vecindad, and understand they were not poking fun at the crooner, but paying respects to the master. They even once invited Juanga to one of their shows, and Juanga loved it.

“They invited me to one of their shows, and after I met them, I saw they were beautiful people, full of energy,” Juan Gabriel told me in 1993. “It was a phenomenal show.”

It made a lot of sense that Juanga, who was first inspired by Enrique Guzmán’s early rock en español hits with Los Teen Tops in the early ’60s, would leave us as a last single a cover of Creedence Clearwater Revival’s “Have you Ever Seen the Rain?” included in Quiero Creedence, a Spanish-language tribute album featuring Juanes, Los Lonely Boys, Los Lobos and other major Latin artists.

That 1993 conversation was my first of three encounters with Juan Gabriel for the Los Angeles Times, on the occasion of his return after the legal difficulties with the label. He would pack Pasadena’s Rose Bowl (a crowd of almost 100,000) in a benefit show for the Chihuahua orphanage he opened in 1987. I was a little apprehensive, having heard stories about his temperament. But entering his hotel room in Studio City, California, was like entering a magical, other-worldly realm. There he was, sitting and playing a long white piano, dressed in white, with white pillows all over the room. He smiled and spoke with me (in Spanish) about everything, even the things I didn’t quit know how or when to ask. The following exchange is one of the very few times he spoke about his sexuality:

Despite all the love of your fans, the media have often portrayed you in your private life as somewhat distant and temperamental. What do you say about that?

“[Laughs] I've heard that before. There are different Juan Gabriels in people's heads, and I can't answer for all of them. But let's set the record straight: I'm not a monster, but I'm also not as good as some people say I am. I'm human and I make mistakes. Within my own family, there were different opinions about me when I was growing up－in all respects. One sister told me I was her favorite. Another one said that . . . well, that I was not what I was supposed to be. You know what I'm talking about, don't you?”

Your sexual orientation? I was about to get into that . . .

Why not? I couldn't care less about your private lifestyle, but I find the Juan Gabriel phenomenon fascinating, considering the still rampant homophobia in Latin America and, especially, Mexico. You're loved by everyone, even the big "machos." But you've never talked about your sexuality.

“I have four sons. That's No. 1. Second, in show business, if you're male and cute and gracious, people assume you are blah, blah, blah. But people don't understand that art itself is female－it is full of graciousness, cadence, color, rhythm. It's full of love and grace. No. 3: Nowadays, the important thing is to be careful. That's what people have to worry about, not whether one is or isn't. Watch your ‘bird’ and watch your butt. Especially in the U.S., where there is, or there is supposed to be, so much respect for all peoples.”


Years later, he famously told Univision’s Primer Impacto that “Lo que se ve no se pregunta” (“What you see you don’t ask about”).

“It was a very obvious thing, but he was having it on his terms long before so many artists could,” said Rubén Martínez.

Just like he once stirred controversy when he compared the great María Félix with Virgin Mary in “María de las Marías” (“With all due respect to Virgin Mary, she’s a Lady, but María Felix is another Lady,” he said), and just like members of his own family had different opinions about him, people saw Juan Gabriel in different ways. My take is simple: Along with José Alfredo Jiménez and Agustín Lara, he’s part of the Holy Trinity in a long list of superb Mexican singer-songwriters, but he’s unique in the sense he transcended styles, sexuality and geography.

“He is the great composer and number one record seller,” the late Mexican author Carlos Monsiváis once wrote. “He was an institutional phenomenon and an industry in his own right.”