A Guide to the SA Music Showcase: Who You Should Track Down Saturday Night

San Anto sound takes over the city on Saturday with this year’s San Antonio Music Showcase, with the best local talent playing shows throughout the night from the Saint Mary’s Strip down to South Flores. With more than 60 bands and DJs performing across a dozen stages, there’s a lot to see. Here’s our rundown of some of the acts you can’t miss:

Amea – midnight, Phantom Room
You can get high off of Amea. Her voice veers in and out of ethereal, all while draped over slow synth and soft bass. ” Her tone bounces between breathy and authoritative, the kind of voice that takes you on a journey through the track, filled with ups and downs. It’s all backed up, of course, by some chilled out R&B in the vein of Active Child or James Blake. Catch Amea’s dreamworld at the Phantom Room’s Hip-Hop/R&B night.

Dance Like Robots – 1am, Limelight
Dancing? And robots? Already interested. Sure, they have a funny name, but Dance Like Robots take you on a slow burn. There are droning introductions, repeated melodic motifs that bend and twist, and mellowed-out interludes. The whole time, they’re building, with drums that veer from charging to clangy and cacophonous. Live, it all builds into a loud a wash of sound that captivates any audience.

Búho – midnight, Bottom Bracket Social Club
Búho is alive – and all this time we thought San Antonio’s beloved noise rockers might be done. This on again off again favorite of ours sounds kind of like a ballad to punk, or love letter to noise rock, depending on which song you catch. We haven’t really seen the band this active since they re-released and played a series of shows promoting Beggar’s Teeth in 2013. Their songs and live shows are explosive, with crisp, wild drum patterns, walls of guitar noise and even the occasional vocal chanting. Rock out, catchup with Búho, and try to convince them to keep making and playing music this time around.

Michael J and the Foxes – 1am, Amp Room
Side project turned fan-favorite Michael J. and the Foxes, by Michael Carrillo of Deer Vibes, tells stories with a sad, folksy brand of bluegrass goodness. Joined by Jordan McCarthy, Aaron Lee and Rob Fernandez, Mikey Vibes takes you on a melodramatic journey through Facebook posts and diary entries. Whether it’s total sad-boy caricature or part of Carrillo’s true self, his heartbroken laments are both entertaining and endearing.

Juanito Castillo – 10pm, Squeezebox
To simply call Juanito Castillo a master accordion player would actually undermine his remarkable skill and importance to San Antonio music. He’s the protege of legendary musician Esteban “Steve” Jordan, the so-called “Hendrix of the accordion.” In many ways, Castillo carries on Jordan’s legacy. The young, blind musician who drummed for Jordan in his final years actually plays some 14 instruments — proficiently. Jordan even once reportedly said that “Juanito is the only one who gets near to what I was able to do as a player.” 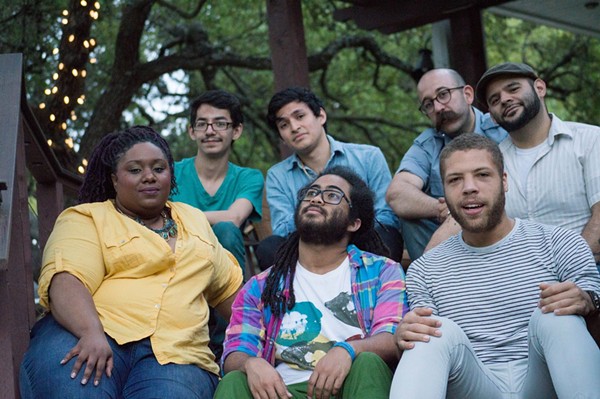 The Foreign Arm – 11pm, Ventura
The Foreign Arm plays music that will make you feel good. Whether it’s on slower violin-tinged jams like “Back Rooms” or catchy uptempo tunes like “Do it Right,” it’s harmony-filled music that makes you want to move your body — neo-soul music at its best. The Foreign Arm is made of Nicholas Blevins, Andrea Vocab Sanderson, George Garza Jr., Jeff Palacios, Darian Thomas, Jorge Aguilar, and Omar Rosel — almost all members of other SA bands. While each instrument and voice remains unique and distinct, the ensemble gels with an empowering and uplifting sound.

The Skajects – (TBD) The Mix
In case you miss the Lost Project at High Wire Arts, you can catch their hybrid band The Skajects. Members of Young Costello and Spies Like Us join The Lost Project to play the latter’s songs, but this time with horns (so think Lost Project with a horn section). The decision was made, according to guitarist/vocalist Jason David Valdez, out of the need to kill the Lost Project’s growing reputation as a ska band. What started as “kind of a joke,” says Valdez, has now turned into an actual ska band. “If people think we’re gonna be a ska band, we should have horns,” he says. The Lost Project came back from tour on August 28, and have been working on Skajects ever since. They will, appropriately, be playing the multi genre night at the Mix.

Mockingbird Express – 10pm, Faust Tavern
Local psych trio Mockingbird Express is ready to take you on a trip. Part psychedelic blues and part experimental rock and roll, think Jimi Hendrix with a touch of San Anto. Made of bassist Josh Borchardt (Crown, Bright Like the Sun,) drummer Kory Cook (the Boom, Dark Planes,) and guitarist/vocalist Marc Smith (Creatura, Shiva’s Medicine Cabinet), the band ranges from chilled out to straight up rock and roll. Smith experiments with a range of guitar effects, and on some songs the drumming starts to sound almost primal as Smith repeats lines like, “Remember that Earth is where you’re from… but where you going?” Take us back to Earth, Mockingbird.

Verisimilitude – 11pm, Limelight
Brothers Dakota and Zach Appelbaum are joined by Feliza Salazar on drums to produce a sound that takes you far away. Salazar’s intricate drum beats keep pace while Zach (guitar) and Dakota (bass) play off each other, sometimes in an almost call and response-like method. Other times, they just get lost in sounds the blend into each other.

For more on the San Antonio Music Showcase, check out the full line-up.