San Antonio Is Swimming In ACL Spillover This Year 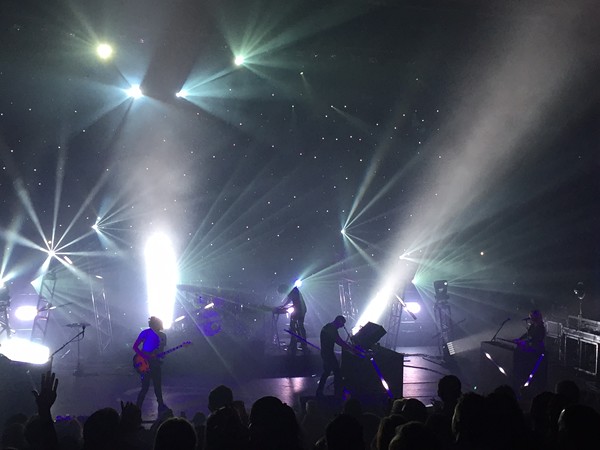 Last Monday, M83 turned downtown's Aztec Theatre into a synth-infused, neon-drenched dance party. With a night sky backdrop complete with flickering and shooting stars, the French dream-pop masters took the audience on a trip through each wave of their '80s-throwback catalog — blasting off with the moody-yet-danceable backbeat of "Wait" before grooving through saxophone-heavy tracks off their latest album, Junk, eventually capping the night by wailing some of their most memorable songs, like "Midnight City," alongside an adoring crowd.

It's the kind of show that wouldn't have happened in San Antonio last year, or the year before that. That's because this year, for what appears to be the first time ever, Austin City Limits Music Festival headliners drove the 80 miles south to play here. Touring between ACL weekends one and two, M83 was just one of many of the festival's main draws spilling into San Antonio to play the Aztec. Among them are the Afrikaans-accented aliens with Die Antwoord, who, despite no less than two back-to-back weekend shows at ACL up the road, will play a sold out show in downtown San Antonio tonight.

That any ACL headliners are playing packed shows here between festival dates seems to be not just sign of San Antonio's evolving music scene, but also the result of a shakeup in the concert promotions business two years ago. In late 2014, entertainment giant Live Nation bought a controlling interest in the Austin-based C3 Presents, the promoter behind major festivals like ACL and Lollapalooza. Then last year, the Aztec's owners announced that Live Nation had bought a controlling interest in the fledgling 1920s-era relic, effectively taking over concert booking for a venue that owners had tried for years to rehab into a vibrant downtown performance hall without much luck.

All you have to do is look at the Aztec's concert calendar to see how much that new partnership has changed what kind of bands you can now catch playing in downtown San Antonio. Notwithstanding this week and last's ACL spillover acts (Cold War Kids, M83, Die Antwoord, Foals, Schoolboy Q, to name some), on deck for the next couple months are Against Me!, Bad Religion, Lauryn Hill and Henry Rollins.

Of course, the Aztec is just one of the many pieces of San Antonio's patchwork entertainment scene that have shifted in recent years. The Tobin Center now draws superstar headliners like Kraftwerk and Morrissey, and is now reportedly teaming up with the Maverick Music Festival to make that homegrown fest pack an even harder punch next year. Paper Tiger brought in the promoters behind Fun Fun Fun Fest to book the revamped venue, upping the Strip's concert game almost overnight. Scoremore – the young, premier hip-hop promoter in Texas behind this year's inaugural Mala Luna Music Festival – continues to put on shows at Alamo City Music Hall, turning the near-east side club into San Antonio's rap and hip-hop epicenter. Meanwhile, the Korova continues to book punk and hardcore shows while, up on the Strip, Squeezebox seems to have filled the void left after Saluté's closing.

Matt Albrecht, marketing manager for the Aztec, said he couldn't discuss Live Nation's deal with C3 Presents that allowed the venue to book so many ACL headliners this week. It's most likely that Live Nation's controlling interest in C3 got them around that pesky "radius clause" that's doomed so many past San Antonio shows. Still, Albrecht said that this does appear to be the first time in history that ACL bands have been allowed to play in San Antonio's market.

Blayne Tucker, the founder and promoter extraordinaire behind the Maverick Music Festival, said he looks at it as a test-run of sorts. Apparently Live Nation thinks they can sell enough tickets here for bands that are already playing up the road in Austin – not one but two weekends in a row. That means the big dogs might be finally looking at San Antonio's music scene as something distinct and vibrant, not just a barnacle on Austin's heel.

"If it works out for them, if they sell enough to make it worth it, I think it's sign of San Antonio's changing music landscape," Tucker said. "It's sign San Antonio's becoming a more viable market for ticket sales in general."