Dead On: Muertos Fest at La Villita Will Be Better Than Ever 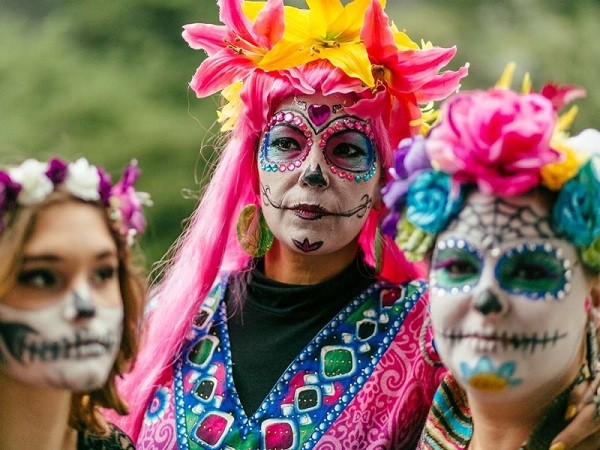 Now in its fifth year, Muertos Fest at la Villita has grown into one of the most interesting and culturally vital festival experiences in town.

While once in danger (at least in the United States) of being wholly subsumed by the capitalist Halloween juggernaut, Dia de los Muertos—a traditional, multi-day Mexican holiday for remembering the dead and praying for their spiritual journey in the afterlife—has enjoyed a stateside boon over the past decade or so, as Mexican-American communities rally around the preservation of their heritage.

Here in our neck of the woods, there's a plethora of fine events on or around Dia de Los Muertos (Oct 31-Nov 2) to celebrate the holiday, which incorporates indigenous ceremonial elements with certain aspects of the Catholic faith, to form a hybrid that everyone can observe in some way.

It seems, however, that the two-day Muertos Fest, held on the grounds of La Villita, is perhaps the most complete and multi-faceted Dia de los Muertos event in town. Apart from altar contests, customary face painting, a Dia de los Muertos procession, workshops, live poetry from some of SA's best wordsmiths, and tons of art vendors, festival-goers will be treated to a fantastic live music lineup. Like the event itself, the lineup is full of acts that both commemorate Mexican/Tejan@ heritage and explore new territory while employing elements of the familiar. Here's a look at the acts we're most excited to see:

Saturday
El Conjunto Nueva Ola
Mexico City's El Conjunto Nueva Ola (ECNO), which translates to "the new wave ensemble," does exactly what its name suggests. Incorporating elements of the cumbia and conjunto styles, along with new wave, rock, and even disco, ENCO fuses the old and the new in novel and fun ways. The band's music includes some promising originals alongside impressive and wildly kinetic reworkings of a surprising variety of pop songs, like A-Ha's "Take on Me" and Billy Idol's "Dancing with Myself," to name just a few.

Grupo Frackaso
You had me at apocalyptic cumbia. Young SA outfit Grupo Frackaso makes cumbia music with punk energy, which the group gloriously dubs "apocalyptic cumbia." While many of the band's high-energy, original songs, as heard on its head-trip of a debut album Cumbiapocalyptica, follow the cumbia format mas o menos faithfully, the vocals and instrumental fury often propel the songs to the excruciating emotive tautness of thrash metal.

Sunday
Mexrrissey
Hailing from Mexico City, a place that just might love Morrissey even more than South Texas, Mexrrissey is a Morrissey tribute band that reps the best kind of cultural fusion. The band's website, full of funny Moz puns and the telltale signs of avid (rabid?) fandom, describes its sound as being "like a brass and string led combo from the smallest village with the biggest bleeding heart." With its loving and expert new arrangements—holistic translations, if you will—and cast of expert musicians, this tribute band is far from a mere novelty, and really breathes fresh life, and familiar melodrama, into its interpretations.

Las Tesoros de San Antonio
A group of elder stateswomen of San Anto's rich musical history, Las Tesoros de San Antonio is Rita “La Calandria” Vidaurri, Beatriz “La Paloma del Norte” Llamas, and Blanca “Blanquita Rosa” Rodríguez. All hailing from el westside de SA, each of these women experienced local (and wider) individual success back in the 1940's, 50s, and 60s. Now, you can catch all four of them together, performing their old school pop, conjunto, and proto-Tejano tunes in the heart of the city that they have helped shape.

Pochos Chidos
In a fresh take on an old form, SA group Pochos Chidos make instrumental, psychedelic cumbias using live instruments, as well as electronic sounds and beats. The five-piece produces tunes that feel surprisingly organic for partially electronic compositions. In the live setting—especially out on the Riverwalk at night—Pochos Chidos' music takes on an all-consuming, meditative-dance vibe, situated somewhere between the ruminative space of an indigenous ceremony and the cathartic abandon of a night club scene.