It’s mid September at the 4,000-seat Sandia Ampitheater in Albuquerque, New Mexico, and Nina Díaz and her solo band are a few hours away from opening for Cyndi Lauper. Nina had just stepped out to the parking lot to retrieve something she needed for her simple show wardrobe, when someone knocked on her dressing room door. Nina’s drummer – and, for the last two years, boyfriend – Jorge González answered the knock at the dressing room door. It was Cyndi Lauper, asking if Nina would sing “Girls Just Want to Have Fun” with her on stage that night. Jorge relayed the message when Nina got back. He says she responded in an unimpressed, matter-of-fact way, “OK, let’s go,” even though she couldn’t remember all the lyrics.

“Oh, no problem… If I had to sing one of your songs I’d need the lyrics too,” Nina recalled Lauper telling her. She stumbled a couple of times during soundcheck, but it went well.

After her own opening set, Nina was determined to memorize the song. She practiced Lauper’s 1983 hit for an hour, listening to the song countless times. She missed most of Lauper’s set, but when the time came to join her onstage, she was ready. Or sort of.

Lauper decided on a slowed-down version that night, and she wanted Nina to sing the intro. Nina thought to herself, Just get that first verse right. She sang the first line, and the crowd thundered. “I felt it all through my body, and I hadn’t felt that in a long time. At the end I had this natural high.”

“Nina had no idea she’d sing with Cyndi, who just threw her in the water,” Jorge said. “And Nina kept her head up, like she always does.”

Well, not always. Three years ago, Nina was a mess. She drank too much and was using meth, like on the night of January 9, 2013. Nina was recording a demo for “January 9th,” a song that would become one of the many highlights from her debut solo album, The Beat is Dead, when her drug-induced paranoia hit bottom.

Nina thought someone was outside, watching her through the window. Something finally spooked her (she says she “felt this big, like, push”), dropped her guitar and ran to her mother’s room, screaming, “I think there’s someone outside my window!”

Of course, nobody was there. Looking back on it later, she thinks maybe it was the spirit of her dead grandparents trying to warn her, “telling me to take care of myself and take care of my music, or I would die.”

One night, an acquaintance casually told Phanie Díaz, Nina’s sister (and drummer* for both Girl in A Coma and another GIAC spinoff, Fea) that Nina was looking to score drugs from her.  “As if Phanie wouldn’t flip!” Nina says. So Phanie confronted her.  At first, Nina denied it, but change was inevitable once Phanie found out. She did her detox mostly alone, at home, for four days, then tried an AA meeting for the second time in her life, all after a failed attempt to get clean years earlier.

“March 25, 2013, is my sober date,” Nina says, which seems to be true –  she looks healthy and her mind is as sharp as ever. Soon after joining AA, she broke the news to her manager, Faith Radle, and then to her Girls in a Coma: she wanted to go solo.

Nina told them she felt she had the songs in her, and that they were better suited for a new project, independent of GIAC. If anyone had any doubts she could pull it off, Nina’s NPR Tiny Desk concert in late August quashed them when she and her band offered a memorable, naked version of three key album tracks (“January 9th,” “Dig” and “For You”). Even in stripped-down form, the songs proved Nina to be a genuine songwriting force.

“I would love to do an acoustic show with The Beat is Dead,” Nina says, thinking back on it. “I see that happening after the first tour of the album itself, maybe before going back to the studio with GIAC.”

Besides her own resiliency, the fact that Nina is surrounded by love at home and on tour didn’t hurt in her recovery. Entering her North Side house, where she lives with her mother María, adoptive father (Margo Gonzales, whom she calls “my real dad”) and brother Nick, is almost like entering a Chicano pop culture museum. There are the dolls hanging from a carport, a basketball double-shot arcade and a pool table in the living room, pictures of Selena, Girl in a Coma, family, an old piano, and old concert flyers everywhere. The house includes two separate rehearsal rooms, one for GIAC/Fea and one for Nina. The voice of Michael Hutchence regularly rings through the house.

“I start my day watching INXS videos. Or Queen,” Nina says. “It calms me. There’s something about [Hutchence] that makes me want to get out of bed and do my stuff.” 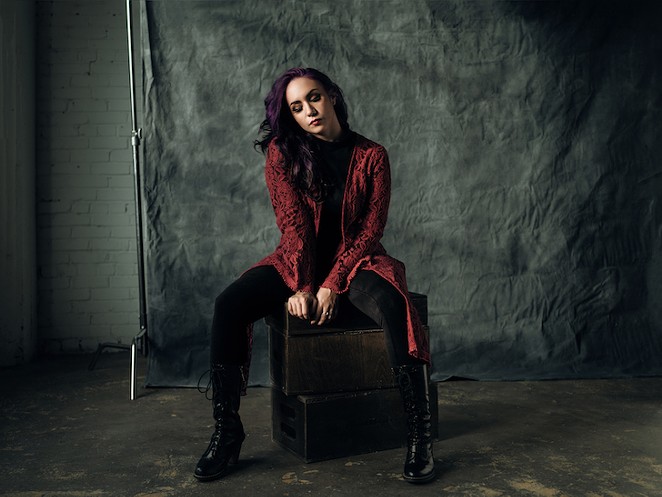 Underneath the little TV blasting INXS videos, there’s a little altar featuring a picture of Radha-Krishna, incense and candles. They’re the remnants of her time hanging out at the local Hare Krishna temple, which she attended during her early stages of sobriety. She says she “got spiritually lost for a moment,” so she’s been trying to get back into chanting her Krishna mantras.

“I just kind of got beat up mentally, going through a lot of different emotions and I got stuck and lost.”

Taped on one side of the altar are three handwritten pages beginning with “Dearest Daughter” and ending with a heartfelt request that makes a reference to Girl in a Coma’s latest album: “While I realize this is a lot to ask, just keep me with you for all your days… and do your best to trust me on this one last thing… I’ll always be with you to make sure you are always happy and safe… that’s all ‘the rest.’ I’ll take care of the ‘Exits’ part. Love XO.”

The letter was given to her by Stuart Lederer, an Austin-based guitarist with the 1992-93 lineup of the Flesh Eaters, who passed away in 2015. “He was my rock ’n’ roll dad, in a way,” Nina says. When Lederer died, he left her guitars and amps and this letter.

Nina walks around the house wearing gray sweat pants, yellow socks, no shoes, and a David Bowie T-shirt. She adores the man, and even her little long-haired chihuahua mix is named Ziggy (the other two four-legged members of the family are a friendly poodle named Ralph and the intimidating Nash, a massive outdoor beast that looks like he could could eat your feet). Father Margo and boyfriend Jorge are in the house, and, as usual, you can feel the good vibes. Yes, Nina had plenty of love and support at home, but she credits her bandmates (Jenn Alva and sister Phanie from GIAC, and bassist Austin Valentine, guitarist Travis Vela, keyboardist Johnny Shrink and drummer Jorge González with her solo band) with keeping her down-to-earth on the road and in the studio.

In public, everyone talked about how supportive Jenn and Phanie were upon finding out Nina wanted to go solo. Truth is, things didn’t go so smoothly at first.

“It’s hard to explain the relationship with the [GIAC] girls,” Nina says. “People think, ‘Oh, they’re sisters, they love each other.’ That’s true, but it’s also true that in any relationship, family or business – and in GIAC we have both – a lot of stuff may come up.”

As the youngest in the trio (28, and they’ve been together since Nina was 13), she had to get used to Jenn and Phanie constantly trying to look out for her. “They do it because they love you, but sometimes you just need a little bit of space to figure things out.” So she broke the news to them and there was no way back — Nina was going solo.

“The girls were afraid,” said Nina. “‘Oh, is she going to leave GIAC now’?” There were some arguments, but within the first year Jenn and Phanie had started Fea, which Nina says “relieved a lot of pressure.” She didn’t feel any need to hurry up and rush her own album. As she puts it, they were now all “learning a lot of stuff doing [our own thing].”

Jenn, who plays bass for Girl in a Coma and Fea, says that at first, she and Phanie “weren’t into the idea” of taking a break. They loved playing together, and felt they still had so much more to do. “It took a little bit of time for us to understand it all, but it also gave us the opportunity to do Fea, a project we always wanted to do,” Jenn says. “All in all, it turned into this mega-positive thing.”

With Fea shining in its own right (forget about “punk,” “riot grrrl” and all that nonsense — Fea is a full-fledged rock ’n’ roll band, plain and simple, and a very good one at that) and a new album by Girl in a Coma on the horizon, the question is: How will the band sound now that all its members have evolved as separate artists?

Clearly the enthusiasm is still there.

“We’ve already been writing new GIAC songs, and each one of them is just ridiculous,” Jenn says. “Nina’s grown tremendously as a writer. Before that, she was into abstract stories but now she’s much more direct, and whereas in the past, we only allowed our energies to be as one GIAC unit, now each one of us have our own little attitude and confidence.”

Nina has a similar view. While she’s proud of Girl in a Coma’s past work, she says, “I haven’t felt for them what I feel for my solo album.” More solo work will probably come in the future, she says, but these first songs are special. “This is the one where I’m really letting it out.”

“Maybe it’s because I wasn’t really there before,” she says. Now that she is there, she says she envisions the new Girl in a Coma having a renewed, striking edge – or “that extra alt vive,” as she puts it, “like Stone Temple Pilot’s Tiny Music or the Breeders’ Last Splash. Or the Pixies.” Being outside the band made her realize its strengths and full potential, she says. “I see a very strong future for GIAC.”

Jenn agrees that Nina’s fight for sobriety saved not only herself but the band they grew up with.

“The whole thing could’ve gone sour so easily,” Jenn says. “Luckily, we’re sisters and always watching out for each other.”