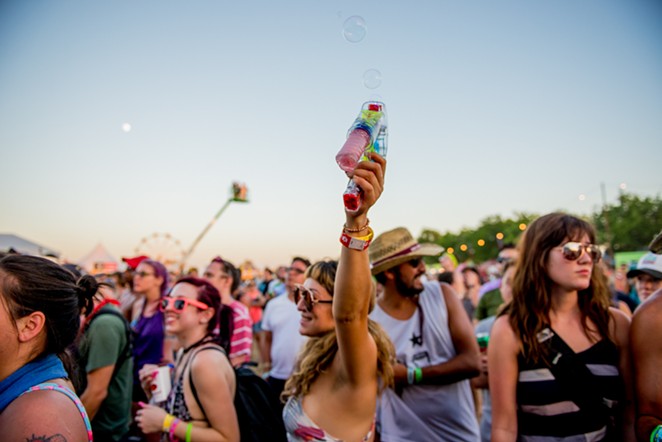 People living along the San Marcos River have grown increasingly fed up with what they call the collateral damage of the region's growing popularity as a tubing paradise with college-age partiers. They warn of pot smokers, underage drinkers, public drunks, and sloshed drivers who've made their local roads unsafe. They say they've encountered places where beer cans collect and line the river bottom, claiming the trash sometimes piles up three or four feet deep.

Float Fest organizer Marcus Federman, of Current Events LLC, has faced questions and concerns in past years when trying to get his permit for the event, which is required for any festival with more than 5,000 attendees. But this week, Guadalupe County commissioners denied his permit to host Float Fest 2017 after a dozen or so people complained about trash in the river, drunk and raucous festival goers, loud music, traffic gridlock – and, of course, all the "cussing" and F-bombs loudly emanating from the festival stages.

A clearly frustrated Federman wouldn't say much when reached by phone Wednesday. "The permit was denied on a technicality and the event, regardless of that, will carry on," he said. "The event is still happening as planned."

Denied on a technicality? Yes and no. One of the reasons Guadalupe County Judge Kyle Kutscher gave for voting against Federman's permit dealt with so-called "discrepancies" in his application. Federman wrote that the ranch had granted him the right to use the property for the concert on July 15 and 16, 2017. He later filed amended the application when he changed the festival dates to July 21-23 there (the festival's slated for three days now, Federman told commissioners, because he wants campers to be able to load in that Friday night to hopefully ease up traffic in and out of the grounds). Evidently, Federman didn't sufficiently dot the Is and cross the Ts when he filed the amended application (he also said he didn't want us to report the new festival dates and hung up the phone when we said that we would).

But it wasn't just a minor hiccup in Federman's application that made the majority of commissioners vote against Float Fest's permit. Everyone from the mayor of Martindale, a small town on the edge of the festival grounds, to a San Marcos city council member urged commissioners to take a stand against the festival and all that it represents – the continued, boozy crowding of their rivers, which they claim spills out onto their streets. Melissa Derrick, the San Marcos council member, insisted, “They don’t respect the river. They don’t clean up like they promise to.” One commissioner, who voted against the permit, was more dramatic: "They're killing this river."

County Judge Kutscher said there were "a tremendous amount of EMS calls" during this year's festival. Federman, however, countered that there was only one arrest (for public intoxication) on the festival grounds last year, and just six ambulance transports from the site, all heat and/or alcohol related, “which, for a large event, is a very low number.” He says he can't control what happens up and down the river.

Which actually seems to be the bigger problem for commissioners and locals fed up with the fest. For the dozen or so people who spoke out against the fest, it was often difficult to tell whether they were grousing about Float Fest in specific or party tubers in general. One resident, Mike McClabb, simply said, “To allow this to happen in the San Marcos river is sinful.” Still, Commissioner Greg Seidenberger pointed out that if the county denies the permit, Federman could just hold a bunch of events below the 5,000 attendee threshold without any county oversight. The problem people are complaining about, he says, goes beyond Float Fest – and therefore, it makes little sense to punish them for it.

What this all means for the future of Float Fest is unclear at this point. The commissioner's court has in the past denied Federman's permit, only to approve it once refiled because, so long as Federman meets the basic requirements, it appears they pretty much have to.

But County Judge Kutscher said one of those requirements is that organizers have a plan to keep both the festival attendees and neighbors safe – something he's clearly not yet convinced of. "You can do a better job," he told Federman. “I think everybody can step up and say, 'Look we can improve what’s being done here.'”