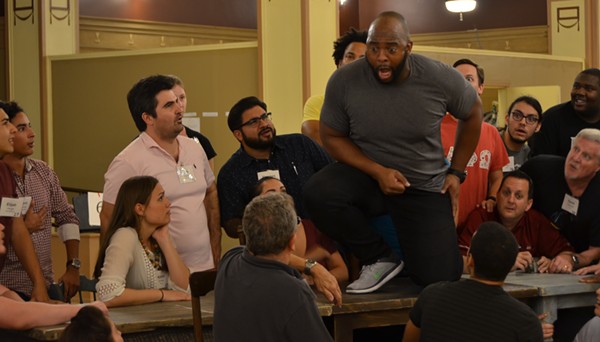 Once deemed too raunchy and startling for audiences, Georges Bizet’s renowned opera comique Carmen comes to light on the Tobin’s stage courtesy of Opera San Antonio. First performed in 1875, Carmen is a fantastic spectacle with all the elements of drama designed to draw audiences in: a love triangle, sex and passion, intrigue, and the ultimate femme fatale, the sensual gypsy Carmen. Chances are you’ll recognize some of the beautiful melodies — even if you think you know nothing about opera — and you’ll walk out in awe of the astounding talent and delicious drama. This production brings in scenery and costumes from the Glimmerglass Festival in New York and sets the story in the 1920s and '30s although it was originally set about a decade earlier. Newcomers will still see a faithful representation of the original story, albeit jazzed-up with flapper dresses and roaring speakeasies.

Opera San Antonio is building a new tradition of opera in the Alamo City and seeks to create productions unique to San Antonio. The company's production of Carmen showcases both international and home-grown talent, with the extraordinary voices of Kirstin Chávez, well known for her portrayal of the title role internationally, and Ryan Speedo Green, arriving directly from the Met, backed up by an array of talented local singers in the chorus. Including 40 San Antonio natives, many students from the University of Texas at San Antonio, University of the Incarnate Word and Trinity University, and young voices from the Children’s Chorus of San Antonio, the chorus has practiced for weeks, singing complicated melodies in French to match the power of the principles.

We’ve all heard San Antonio is among the fastest growing cities in the nation, and Opera San Antonio believes that, as such, we need the glorious music, emotion and spectacle of opera. New general and artistic director Enrique Carreón-Robledo says San Antonio’s rapid growth “lends the spark for opera magic,” and the chorus certainly represents the city’s diversity. Carreón-Robledo and his team, including Alamo City natives Pat Smith (technical director) and UTSA professor John Silantien (chorus master) are seeking to transcend mere technical excellence (piece-of-cake, right?) to ignite chemistry between the performers and the audience. So far it seems like they’re succeeding, as the drama and passion of the music, combined with the skill of the singers, enthralls the audience at rehearsals — even without the spectacle of costume and set to enhance the performance.

Those curious about the history of Carmen are invited to attend a pre-opera lecture led by UIW music history professor and opera buff Dr. Kevin Salfen. The lecture begins one hour before curtain and is free to all ticket-holders. Opera San Antonio has also posted a handy online study guide geared for young attendees.