Punk is Alive at The Mix with Friday Night's Glue Show 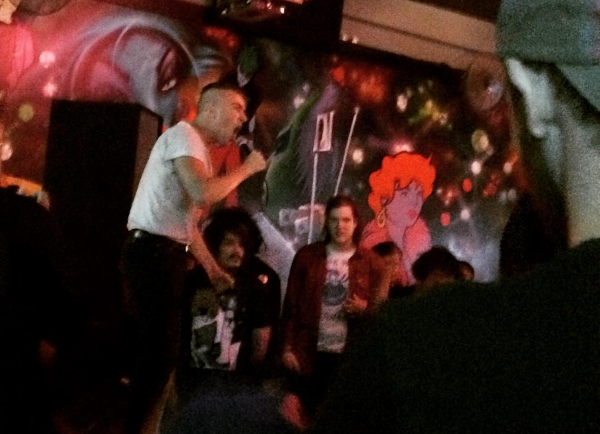 Bringing back an ostensibly bygone era of grime in punk, long before the snapback and hoodie made any appearance in the genre, the Austin-based band Glue is pissed and dejected in every direction. On Friday, the band played a free show at the Mix on N. St. Mary’s street accompanied by locals Sex-Ray Specs and Unit. Beneath a disco ball, standing on a pink neon lit wood floor that’s more welcoming to waltz than a mosh on first glance, Glue started their set with the band’s signature hello “FUCK YOU, WE’RE GLUE.” The room then promptly took ritual formation, with the crowd forming a huge-half circle encasing the band’s lead singer Harris Munger Greenwood.

Led on by the fast and cathartic riffs supplied by guitarist Cody Cox, riffs that sounded as if leather face had joined the band and swapped out his chainsaw for a guitar, Greenwood moved frantically about the floor with rag doll limbs, dodging the debris of flailing bodies around him, smashing a mic against his teeth. Rabid sounding and psychotic looking, he screamed the lyrics to songs like “Enemy,” “The Jokes Write Themselves,” “Backward Society,” and “Disgrace” off their 2014 s/t and demo releases, all to match the expected entropy that takes hold at punk shows.

Face to face with Glue fans, Greenwood spewed his misanthropy up close and personal with a marathon gaze that made you wonder if his eyes were stapled open. During the tiny interludes between songs, the audience got some clue into where some of the songs’ titles might have gotten their despondent inspiration. “I have to take a test tomorrow, I could care less,” Greenwood said.

But it’s not at all easy to shoehorn the band into the jaded and sarcastic canon of punk music, even though it’s easy for me, the writer, to trot out the all the usual suspect adjectives.

The band just returned from the jungles of Central America and the show at the Mix was a kind of welcome back home. And apparently, they left an impression on newly made fans who managed to catch a show. In the comment threads of the band’s 2012 demo video on YouTube, commenters from El Salvador, Panama, Costa Rica and Colombia are now praising the band in Spanish with phrases like “puro sabor” or pure flavor. The commenter from El Salvador even shouted out the rest of Central American punks who did or would see Glue. When your band is any common thread that crosses borders and makes strangers friends, there’s more than just loathing at play. “Saludos a toda la raza Centroamericana que en su respectivo momento los tendran en su casa” said the commenter.

Glue also played a benefit show at Mohawk in Austin the night after the Mix, raising money for native Sioux and their allies resisting at Standing Rock against the Dakota Access Pipeline. In all, the band was a crucial part of the effort to raise the $3,500 that ultimately resulted. As Greenwood wrote on the event’s Facebook page “Punk is an incredible thing. I think we all get disenchanted with it from time to time and it's pretty easy to think that it's just music like any other genre, but when things like this come together, I'm reminded (and I hope you are as well) that we're all here because we care about fighting oppression and we care enough to make a change,” he says. “More proof that this is more than riffs."

They proved the riffs in sweat at the Mix, but it’s good to know the band’s attitude isn’t just Dada affectation, the “fuck you” is directed at someone.