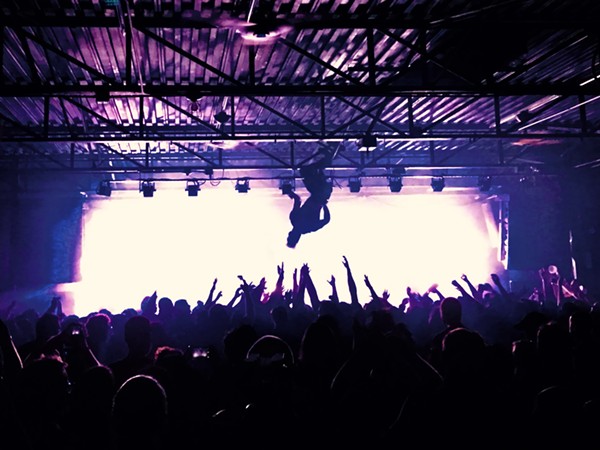 “I’m planning on leaving with a black eye, and I hope Greg Puciato spits in my mouth,” says a friend of mine with a grin as we squeeze closer to the front of the stage at The Paper Tiger. I laugh and wish him luck, thinking he probably won’t need much of it considering the riotous nature of The Dillinger Escape Plan. The singer, Greg, as well as the rest of the band are known for getting a little wild on stage. I saw Dillinger back in 2007 at The Ottobar in Baltimore, and not thirty seconds into the opening song the singer was hanging from a speaker upside down above the stage, screaming into the microphone. It still stands out as one of the coolest moments I’ve witnessed in the fifteen years I’ve been going to shows.

So I came to The Paper Tiger expecting some mighty fine entertainment, and the boys did not disappoint. Electric guitars, machine gun drum hits and banshee vocals shower the audience in waves of dissonance and distortion. Bright LED lights flash behind the band in rhythm to the musical onslaught, slightly disorienting us as we’re swept into the undertow of a mosh pit forming in front of the stage. “Am I too old for this?" The thought flashes quickly through my consciousness as I look around in between stage divers and flying elbows. I see lots of other bearded, tattooed 30 year olds, “lol” to myself and think, “I guess not."

Shorty into the second song guitarist Ben Weinman jumps into the crowd and begins to walk across people’s heads whilst continuing to stay on rhythm to the turbulence that is math-metal or mathcore, a subgenre of metal incorporating rapid-paced jazz time signatures, staccato hits and usually lots of heavy distortion. Despite what may appear as a harsh, violent whirlwind of destruction, there is a unity in the room. A singleness of purpose in the pursuit of an aggressive experience that I’ve personally only found at a metal or hardcore show. If someone falls down in the mosh pit, someone is quick to help them back up. No one’s trying to deliberately hurt anyone else (for the most part); we’re all just trying to feel alive.

As the hour and a half set comes to a close, singer Puciato climbs the rafters above the crowd, swings upside down and reaches towards the outstretched arms of a sweat-drenched audience like a modern day version of Michaelangelo’s “Creation of Adam." I smile as a wave of ambivalence washes over me knowing this is the last time I’ll ever see this band again. The Jersey math rockers announced that these will be their last dates on the road, and they will disband at the culmination of the tour. Laughs, high-fives and raised Lone Star cans flower through the crowd as we poured onto N. St. Mary’s Strip. We left the Paper Tiger as one body. A collective of individuals with a single goal: To have our faces melted off by one of the best metal acts of our generation. Godspeed, Dillinger Escape Plan, thanks for the memories.