The Dark, Electric Sadness of Saakred's 2Ø25 Despite the friendliness of our gigantic small town, San Antonio can sometimes have harsh and unforgiving soil for artists and musicians trying to dig their roots deep. The community is small, everyone knows each other and when anyone, anywhere does anything within the 410 Loop, a version of such thing, (regardless of how many fragments of truth remain), get back to anyone willing to listen over a shot of Fireball and Lone Star Tallboy

It’s that dynamic that seems to have weighed most on Saakred as they chart new territory with their music and art. While Saakred still plays shows in San Antonio, (like their own album release performance earlier this year and at Lonely Horse’s Thanksgiving tour kickoff) Saakred appears to favor a healthy distance from the Alamo City...for the time being, at least. Living in Austin now after some time in Europe, Saakred wrote and produced an album that seems to reflect, with captivating audible fragments, the space between themselves and San Antonio.

Their album 2Ø25 spans several genres yet remains cohesive, despite an abundance of experimental sounds and elements. Saakred’s vocals appear almost ghost-like, haunting the album with sporadic and ethereal melodies, whispers and chants. It’s almost like a dance album, just with many twisting textures. And while incorporating the experimental is nothing new for Saakred, this new collection of music goes full on into punching 4/4 kicks, looping hi hats and synths.

“I definitely think this album is Europe... The influence of Europe. The influence of contemporary art, the galleries I was surrounded by... The drug of my choice, which is romance," they tell me. "When I was in Ireland, I spent half my time there trying to pick up and mend this really intense brokenness inside me — my relationship to San Antonio, my relationship to the women in my life…” 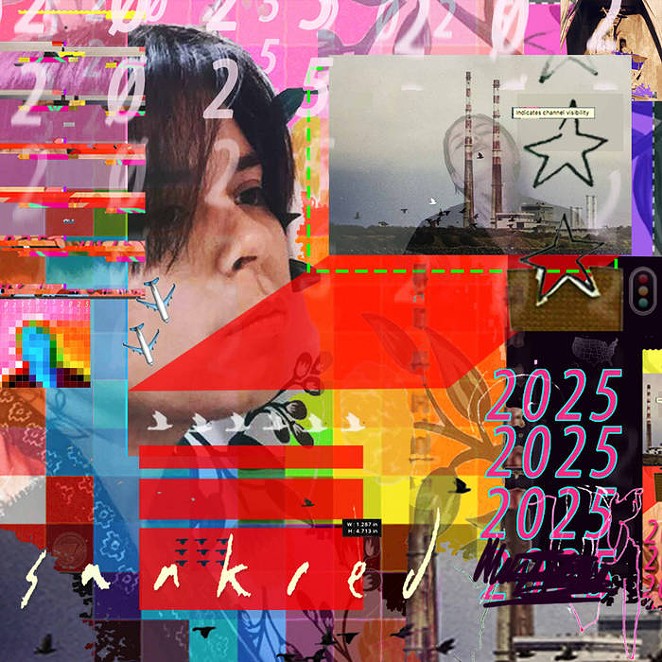 Saakred spent some time at The Burren College of Art in Ireland toward the end of 2015, then Portugal and Spain for another few months in early 2016. They spoke to me about the hurt and frustration they experienced in the San Antonio scene as they were processing their non-binary gender identity, and although Saakred says this album doesn’t necessarily reflect or embody that pain, they feel that it helped push them toward ultimately going abroad — and then eventually moving to Austin.

I think artists, even when we’re trying not to, can’t help but let our life experience and emotions trickle into our work, even just a little bit. When I first listened to 2Ø25, before I even spoke to Saakred about it, there were moments throughout the album where I felt a certain solitariness communicated in between echoing drums and whispers. Dark, subtle tinges of sadness hang in some tracks, like “House of Unspeakability," a seven-minute sprawling trip-hop movement that eventually crescendos into a punching house track. Saakred later talked to me about spending a lot of time alone in Ireland, but then also going to the discos and underground clubs around Europe — experiences an attentive listener can hear in the 11-track record.

Unsure about whether or not they’ll tour for this collection of music, and already working on new material for the next (rumor has it they plan on incorporating some hip-hop elements), Saakred continues to remain unsubscribed to doing what is safe or expected with their art. A triumph reserved only for those willing to push through the status-quo to communicate something raw and authentic.