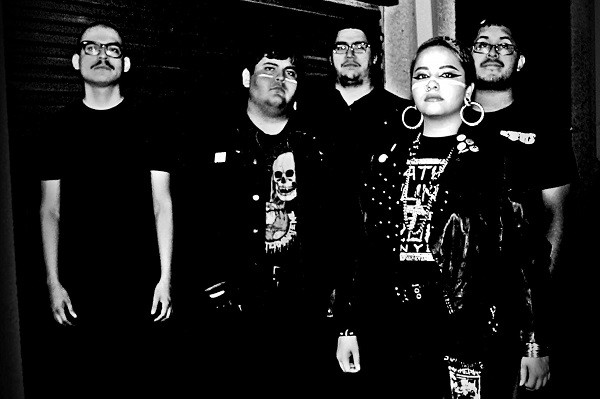 As we all come to learn (to varying degrees) sooner or later, emotions like anger and alienation can alternately act as wellsprings of despair or vital energy sources, fueling no-bullshit efforts at important change. San Antonio hardcore/punk band Amygdala is a prime example of what it looks/sounds like when the latter happens, when anger and disillusionment become potent fuel for a righteous fire.

Surely, the group's abrasive sound is not everyone's sonic cup of tea, but its anti-colonial, anti-authoritarian, anti-hate, and pro-tolerance message is something remarkable, and should serve as an example/inspiration to all.

Aligning Amygdala's powerful, message-based music, and the place(s) from which it comes, with a larger "renaissance in sound and progressive ideas" in the hardcore punk milieu, Bandcamp Daily released an insightful interview piece with the band earlier this week.

As nice as it is to see a deserving and hardworking San Antonio band get some love from an international outlet like Bandcamp Daily, it's even more impressive and more important that Amygdala's inclusive, decolonial causes are being given the attention they deserve.

Check out the article, visit Amygdala's Bandcamp page, dig the searing and heart-rending indigenous rallying cry "Semillas" below, and be on the lookout for your next chance to catch Amygdala live and support its efforts in music and in social justice.