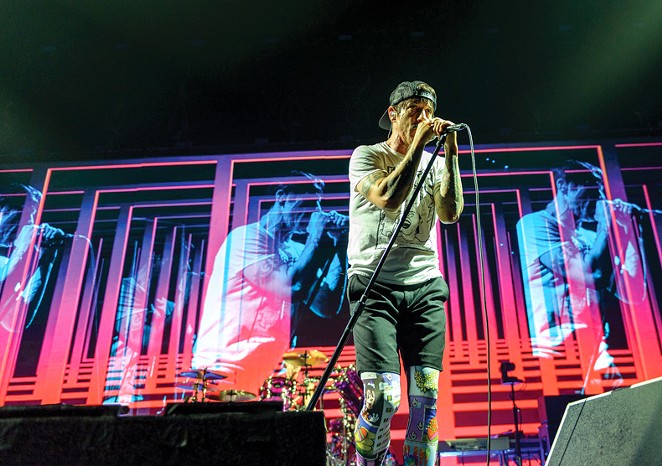 I remember watching this Turkish dude play “Under the Bridge” on his acoustic guitar at this cafe in Izmir, Turkey in 2001. I went up to him afterwards and told him that he did a really good job, and though my Turkish was terrible and his English wasn’t that much better, our friendly gestures communicated that we both appreciated each other there. With the recent car bombing in Izmir, and really just the inclement political climate of the planet, the memory stood out a little more vividly and reminded me of the subtle human connections we can experience through music.

That memory was at the forefront of my mind as I shivered into the AT&T Center and found my seat Thursday night. For an oddly nostalgic opening act was Jack Irons, the founding drummer for the Red Hot Chili Peppers and a former member of Pearl Jam. With some weird psychedelic images projected behind him on a screen, Irons, by himself, jammed out on his drums for about 20 minutes. (I seriously wondered whether I'd just witnessed a Make-a-Wish-Foundation wish come true, because the whole thing felt so raw and out of place for a huge arena rock show.) After that was Trombone Shorty & Orleans Avenue, a self-described "supafunckrock" band from New Orleans whose most impressive act (even for people who aren't huge fans of brass-focused rock, like me), was Troy "Trombone Shorty" Andrews' 30-second circular breathing solo, which made the AT&T Center crowd roar in amazement.

Finally the Chili Peppers came out to an eager arena. Fans cheered as the band dove right into “Can’t Stop” off the album By The Way. As the LA band rolled through their set, a couple next to me handed me what I thought were 3D glasses. “We got a few of these at that mirror maze across from The Alamo," they told me. "It makes this whole experience so much more awesome!” I laughed, put on the glasses, and discovered that the were actually kaleidoscope lenses. Tight. So while simulating a bit of mushroom trip, I watched bassist Flea gyrate across the stage while six little rainbow holographic Fleas danced around him in unison.

I hate when bands come on tour and play nothing but songs from their new album. Thursday night was not that. Anthony Kiedis and the boys took us down memory lane, playing songs all the way back to 1991’s Blood Sugar Sex Magik.

As the night came to a close, I thought about all these memories I had surrounding this band. From watching the half naked silver rockers dancing in the “Give It Away” video when I was eight, to stealing my mom’s copy of Blood Sugar Sex Magik when I was in middle school (sorry mom) to watching that Turkish dude sing “Under the Bridge” at that cafe in Izmir. If you grew up in the 90s, you couldn't escape The Red Hot Chili Peppers even if you tried.

And honestly, there are definitely worse bands that could have played the soundtrack to my childhood. On tour to support their latest effort The Getaway (produced by Danger Mouse and not Rick Rubin; weird right?), the Californicaters aren’t showing any signs of letting up anytime soon.