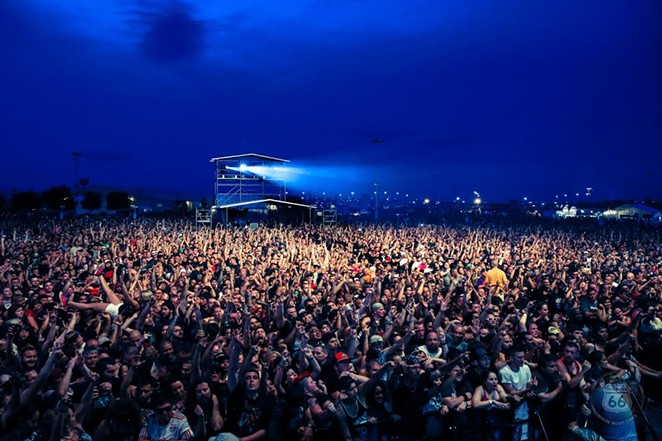 British heavy metal legends Def Leppard will headline a group of 20 top rock acts during the fifth annual Bud Light River City Rockfest on Saturday, May 27, 2017 at the AT&T Center. For the first time ever, the Memorial Day Weekend outdoor concert will feature two main stages for the biggest names in rock music, with a third stage also featuring national acts. Developed by Spurs Sports & Entertainment in partnership with AEG Live, the Bud Light River City Rockfest is an annual celebration of rock music, the largest festival of its kind in South Texas and part of the 2017 “World’s Loudest Month” festival series.

“The Bud Light River City Rockfest continues to grow each year,” said Lori Warren, Senior Vice President of Corporate Finance & Strategy for Spurs Sports & Entertainment. “Fans can expect this year to be our biggest yet with expanded festival grounds and an exciting and diverse lineup. The fifth annual event includes major music icons ready to rock San Antonio at the AT&T Center Memorial Day weekend of 2017.”

“We are excited to team up once again with Spurs Sports & Entertainment to bring the fifth annual Bud Light River City Rockfest back to the AT&T Center in San Antonio,” said Lisa Morgan, AEG Live Southwest Vice President. “The 2017 event promises to be more exciting with a powerful line up and the addition of a second main stage. We couldn’t ask for a better city or a more passionate group of fans for this hard-rocking festival.”

The Bud Light River City Rockfest has grown in attendance in each of the past four years, drawing 14,100 in 2013 and hosting more than 27,800 screaming fans at last year’s event. To accommodate continued growth in its landmark fifth year, River City Rockfest has expanded its footprint for 2017, allowing for an enhanced festival atmosphere and exceptional experience for rock fans in San Antonio. In addition, the 2017 festival will have two main stages to harbor some of the biggest and baddest names in rock music.

Adding to the entertainment experience for a second straight year will be circus sideshow revue Hellzapoppin. The stunt show extravaganza includes a smorgasbord of dark artists, including a fire breather, a sword swallower, and an acrobat.

General Admission tickets and Premium Packages are on sale now and can be purchased at RiverCityRockfest.com, Ticketmaster.com and the AT&T Center Box Office.

General Admission tickets start at $59.50 and three levels of Premium Packages will be offered, starting at $150. Sign up for the River City Rockfest e-newsletter, Rockfest All-Access. Discount pricing for military is also available. A limited number of folding chairs will be allowed into the festival grounds, and those wishing to bring one to the event must reserve a chair pass, free of charge.

Rockstar, Promoter and Roadie Premium Packages are available for the 2017 Bud Light River City Rockfest, with each offering exclusive viewing areas of both main stages, a dedicated entrance to the festival site, complimentary parking, and a commemorative laminated credential. Rockstar and Promoter Package ticket holders will also receive exclusive access to the Premium Hospitality Lounge, private restrooms, an exclusive River City Rockfest t-shirt, live feed of select performances, charging stations, and access to a cash bar. Rockstar Package buyers will enjoy 10 complimentary beverages and will be provided lunch and dinner, as well as an official River City Rockfest poster. For a full list of amenities, visit RiverCityRockfest.com.