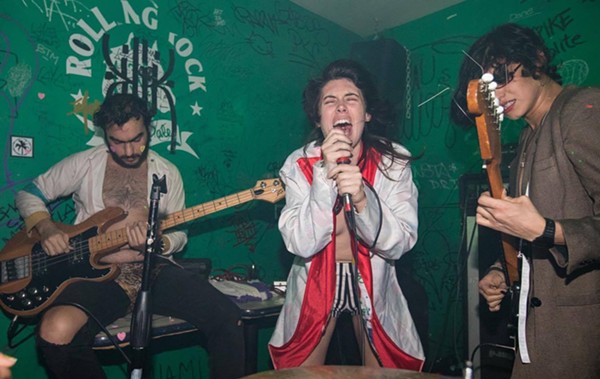 There's an obvious comparison between Cami, Period Bomb’s glitter glue holding the insanity of her project together, and the embodiment of punk spirit himself, GG Allin. They both have a penchant for bodily fluids (in Period Bomb’s case, menstrual blood), don’t care if their music is trashed by non-believers, and put every shred of their soul into their art.

The difference is that Cami is grimy, punk rock purity.

Period Bomb gives a shit about social consciousness, but they won’t let that spoil their fun and sense of humor. They run a hot-line (877.577.BOOM) sexier than the Creep, Corey, and G.L.O.W. hotlines combined, put out Period Bomb Pops cereal, and make handmade merch. But that’s just the fuse — the explosive stuff is their music.

Covering the whole spectrum of punk, from the ambient lo-fi bedroom sessions of her early solo project Mysterr, to the neon girl gang of riot grrrl (earlier work Oily Girls and Gnarly Princess rep this era), and, as of now, a state of perfectly chaotic noise. The kind that’s impossible to tame and look away from, like a glowing orb of musical anarchy. That energy is captured on their new LP, Permanently Wet, recorded in a prestigious Montreal studio.

The album doesn't yet have an official release date, but having had the chance to listen to it in full, I can confirm that Period Bomb is brutal, weird, and wild. The jagged, angular guitars sound like a demented tilt-a-whirl of death, Cami’s ranting, screams, and chants amplified by a layered overlay of her own voice, giving a feeling of a near revolution of noise, or at least blurred vision and dizziness.

And they not only support other musicians on DIY tours, they've formed an indie collective with other outcasts against the grind, Miami-based Crass Lips Records.

I talked to Cami and the rest of Period Bomb (Drummer Gladys Harlow, Guitarist Donald Deyo, bassist Bobby Nuncio) on the phone as they were on the road to a show in Beaumont about the independent music scene, the current state of punk, and their trademark, literal period bomb.

"We used to play with fake blood to show my sarcasm in a performance art way," Cami said about the period in Period Bomb. "After a while, the fake blood made me really sick, so I started to use my real blood once a month when I have it." On the process of harvesting her blood, she says, "I would collect it in a diva cup, then put it in a juice bottle and drink it. They would think it's beet juice or something, but when I spit it at them they'd think there's no way I'd do that with my real blood. But then the smell gave it away."

On getting creative with the feminine discharge, Cami said that they would supersoak the crowd with it in "water guns shaped like grenades." When asked if they'll rain blood at their San Antonio show tonight, Cami said it's not that time of the month.

Asked if there might be a new wave of punk inspired by the Trump Administration, one of the Period Bomb members, Bobby, chimed in: "I think it's going to be really awkward for a second, because everyone's going to be super controversial to be standing out." But not all is combative in this new punk movement. "Queer people are going to shine really hard and it's going to be the best ever," the band says.

"If people never have the chance to be inspired by these artists who clearly needed music in their lives to become a better person and get through everything life has thrown at them," Cami said on the importance and empowerment of music and self-expression. She added, "I think going to shows can be a really inspiring thing and inspire them to do something totally different with their lives, at least as a form of expression."

"Letting people perform in your house, living room, in your kitchen, whatever you can facilitate can make a big difference in art and society."

Period BOMB vs. Problem Child’s The Famelzz Tour can be caught at Paper Tiger today at 8pm with Pill. If you can’t make it, they’ll be back with Problem Child Monday, March 13 at 527 El Paso St. Also, Period Bomb will join the stage with other "noise punk weirdos" at Jimmy's Wurl, an unofficial SXSW showcase based on unsung hero of the underground Jimmy and his YouTube channel. The fest will go down at Shirley's Temple on Saturday, March 18.

Check out the video for "Jackshit" off of Permanently Wet.