In the Facebook group Dead Mall Enthusiasts, you can skim through galleries of strangely alluring photos of empty malls posted by members — a reminder of a time when the mall was the epicenter of culture and fashion in Middle America, a time when shoppers could catch concerts while leaving Structure or Camelot Music. Enter, Tiffany. A runner-up on the television show Star Search, Tiffany Renee Darwish got her first taste of pop-stardom with a string of performances at shopping malls across the United States with the awesomely-named "The Beautiful You: Celebrating The Good Life Shopping Mall Tour ‘87." Her cover of Tommy James and the Shondells' 1967 song “I Think We’re Alone Now” would become her biggest hit and contribute to the soundtrack of literally every 80s movie prom scene. 7:30pm, $34.50, Tobin Center For The Performing Arts, 100 Auditorium Cir.


As the landscape of extreme metal changes and evolves, certain sub-genres are beginning to stand the test of time — like "metalcore," a fusion of thrash metal and hardcore punk, which grew in popularity from bands like As I lay Dying in the early 2000s. Brighton, England band Architects fit the mold with their eight-track debut album Nightmares, which is littered with unexpected transitions, dissonance and technical guitar and drum badass-ery you don't usually get from a new band. Fans of the genre can easily spot the influence of bands like Converge and Norma Jean. On tour for the first time in the U.S. after losing their lead guitarist to cancer last August, Architects continues to carve a path for themselves in the realms of post-hardcore and metalcore, even through tragedy. With Stray From The Path, Make Them Suffer, 7pm, $20, Paper Tiger, 2410 N. St. Mary’s St.


The '80s and '90s have distinct identities when it comes to pop music. The 80s brought you The Smiths, Depeche Mode, Guns N' Roses and goofy pop like A-ha. The '90s, meanwhile, brought us grunge like Nirvana and bubble-gum pop like Britney Spears, along with the rise of mainstream rap and hip-hop like Tupac and The Notorious B.I.G. So what did the 2000s do for us? Amy Winehouse? Coldplay? Or maybe it was the piano-playing pop singer-songwriting stylings of Vanessa Carlton? Originally interested in dance before jumping into the sea of singer-songwriter stardom, Carlton attended the School of American Ballet, but while she was there discovered her true calling was singing as she performed in NYC bars and clubs. Shortly after school, Carlton met a few songwriters and producers and eventually recorded her first record Be Not Nobody with the beloved track and debut single “A Thousand Miles,” earning her several Grammy nominations and launching her career through the 2000s. 7:30pm, $36.50-$60, Tobin Center For The Performing Arts, 100 Auditorium Cir.


It feels like the indie-rock scene is full of bands trying real hard to project a certain edginess, which is what makes Texas' own Chamanas a breath of fresh air. The band doesn’t sound like they’re trying to sound like anyone but themselves – an eclectic blend of indie rock, trip-hop and Mexican folk music. Nestled on the border of El Paso and Juarez, The Chamanas take their name from a person who can cure and heal through the use of natural medicine. And one listen to the breathy, chilled-out tone of their 2015 album Once Once, you can easily drift into a peaceful meditative place. On a several-days Texas tour, The Chamanas are definitely a band to start paying attention to in the next year. With Levees, 8pm, $12, Paper Tiger, 2410 N. St. Mary's St.

John 5 And The Creatures
Thursday, March 23

Marilyn Manson is pretty well known for being a complete asshole to bandmates and artists on tour with him. There’s an infamous 2003 video of former Manson guitarist John William Lowery, better known as John 5, throwing down his guitar on stage and pushing the Antichrist Superstar after he kicks Lowery in the chest during a live performance of “The Beautiful People.” A year after that sort-of sad, slightly-funny scene, the two parted ways. Since departing Marilyn Manson, Lowery has found a home in another spooky frontman’s band, Rob Zombie, where he's played guitar since 2006. On top of contributing to the rock-star-slash-horror-director's band, Lowery has also released an impressive seven instrumental albums of solo work, which at points sort of sounds like a revamped Steve Vai (who actually appears on a John 5's track "Perineum"), a sort of prog-rocky nu-metal punctuated by intense guitar solos. On tour in support of his most recent instrumental solo album Season Of The Witch, Lowery proves he doesn’t necessarily need a scary frontman to rock a dope show. 7pm, $16, Fitzgerald's Bar And Live Music, 437 McCarty Rd. #101

It’s hard to believe that one of the premiere spots to cop vinyl in SA has only been open for a year. Opening doors in 2016 in the steadily growing South Flores district, South Town Vinyl quickly became one of the best places in town for wax collectors looking for anything from that rare '90s industrial single to a re-issue of Michael Jackson's Thriller (seriously, everyone needs a copy of that one). To celebrate the occasion, the shop is throwing a party with some serious heavy-hitters — including Doc Martin, who’s held residencies in New York, Miami, LA and has toured with Daft Punk and The Basement Jaxx. Also in attendance will be SA’s favorite queer-bass artist Pink Leche, who blends a mix of electro-pop and New Orleans ‘bounce’ made popular by the likes of Big Freedia, all while adorned in crazy colorful costumes — oh, and accompanied by a dancer who wears a huge skull that’s half the size of her body. 6pm, $12-$15, Paper Tiger, 2410 N. St. Mary's St.

Chances are, if you graduated high school in the late 2000s, you or one of your friends had a Mayday Parade record and wore the hell out of it. In 2006, without any label support, the Floridians sold over 50,000 copies of their debut release Tales Told by Dead Friends, a six song EP that fused wailing post-hardcore emo-ish singing with just the right amount of anthem-sounding pop-rock that had a generation of show-going scene kids flooding Hot Topics for T-shirts to sport at the band’s appearance at Van’s Warped Tour the following year. Back on tour to celebrate the 10th anniversary of their first full length A Lesson In Romantics, the Tallahassee boys prove that emo-style singing probably isn’t going anywhere anytime soon. With Knuckle Puck, Milestones, 7pm, $25, Alamo City Music Hall, 1305 E. Houston St. 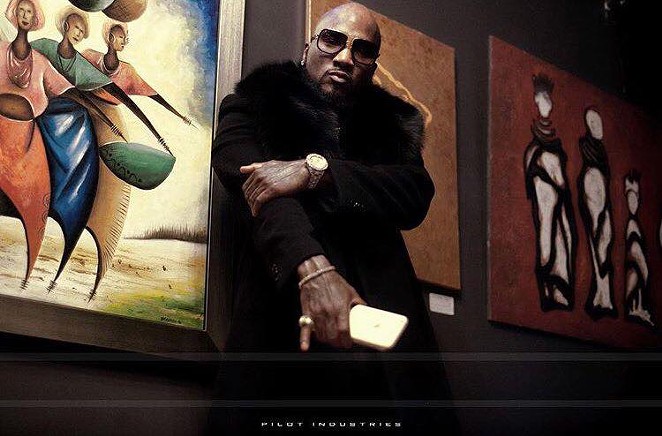 
“Bill O’Reilly, eat a dick." Sage words from Jeezy in “My President Is Black,” a a Jay Z-featuring remix of his original 2010 track "My President," which just happened to feature former Jay Z rap rival Nas. Before the collaborative anthem, Jeezy got his start in 2001 with the release of Thuggin’ Under The Influence, a southern hip-hop and crunk album that featured a track with Lil Jon, who actually produced some of the album. With new work due out sometime this year, Jeezy has remained a staple in the dirty south hip-hop community, the kind of person who will even open up his home to Hurricane Katrina victims.