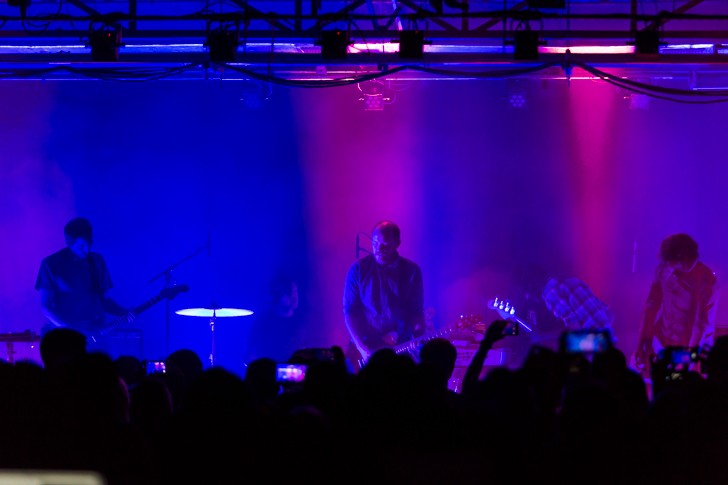 Remember the Care Bears? Remember how, whenever they would go up against some sort of villain or evil-doer, they would lock arms and beams of light would shoot from their ‘lil Care Bear bellies, a super-move called the Care Bear stare? Well, if there were music to somehow accompany the Care Bear stare, it would most likely be the crescendoing peak of an Explosions in the Sky song.


The Paper Tiger was at capacity last night, hundreds of people packed into the courtyard and main room to see arguably the most illustrious post rock band playing music right now. Originally formed in Austin (though the majority of the dudes are from Midland), Explosions in the Sky helped pioneer the genre alongside bands like Godspeed! You Black Emperor, Mono and Sigur Ros. It's a mostly instrumental genre, with classical-like movements that can range anywhere from droning and atmospheric to aggressive and tumultuous.


Opening the night was Thor and Friends, an Austin based band whose core members are Peggy Ghorbani, Sarah “Goat” Gautier, and Thor Harriss, who most notably played percussion on Devendra Banhart’s 2004 record Nino Rojo and also served as the percussionist for NYC no wave band Swans from 2010-2016. Harriss and pals played about an hour of carefully crafted experimental music that utilized a mass of instruments including violin, cello, glockenspiel, vibraphone, theremin and clarinet. The textures were rich and the musicianship was phenomenal, and in a way it was perfect for setting the mood for Explosions.

Accompanied by a thunderous roar from the excited audience, Explosions took to the stage opening with “Yasmin The Light," the second track off their 2001 release Those Who Tell The Truth Shall Die, Those Who Tell The Truth Shall Live Forever. Punctuating their set with some of their newer shit (which is not as awesome as their old stuff, to be sure, but definitely not bad), the band pulled the audience through songs from pretty much their entire catalog (except for their first album) as colorful lights and fog encapsulated the band like they were some sort of gate keepers to a magical cloud paradise (you know, like the Care Bears).


The post rockers played a hearty 90 minute set of shimmering instrumental rock and roll that washed over the crowd in swirling echoes of beautiful distortion and delay. Then they plummeting to a jilted halt, closing with the track “The Only Moment We Were Alone." For having not played in San Antonio in several years, last night’s show felt like a gift from an old friend. Like, "Sorry it’s been a while. But here’s something amazing."