Mnozil Brass to Perform at the Charline McCombs Empire Theatre 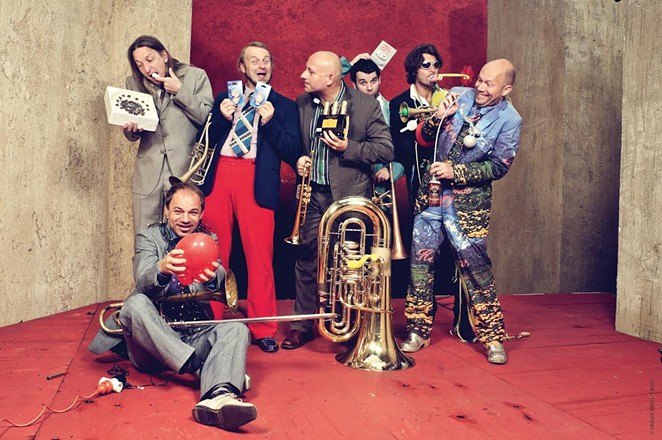 Mnozil Brass has established itself as one of the world’s premiere brass ensembles. With more than 130 performances a year, the group has sold out houses from the farthest reaches of the European continent to Israel, China, Taiwan, Japan, Australia, Canada, and the United States, and has captivated audiences with their blend of immense virtuosity and theatrical wit. No wonder their videos have garnered millions of YouTube views and their fans have traveled countless miles to hear them play.

Mnozil Brass take their name from the Gasthaus Mnozil, a restaurant across the street from the Vienna Conservatory, where, in 1992, seven young brass musicians met and began playing at a monthly open-mic. Since then, the group has embraced repertoire for all ages and stages of life: from folk to classical to jazz to pop; all executed with the same fearlessness, immense technical skill, and typical Viennese schmäh (almost impossible to find an English translation, but best rendered as a kind of sarcastic charm!).

In their time away from touring, Mnozil Brass has recorded eight albums and six DVDs. They’ve collaborated on three operetta and opera productions, and composed and recorded the music for the 2006 film Freundschaft. The group has been nominated for the Amadeus Austrian Music Award and won the prestigious Salzburger Stier Cabaret Prize in 2006.