by Chris Conde and Kimberly Rivera

With a fresh new partnership with The Tobin Center For The Performing Arts, Maverick Music Festival 2017 descended upon The La Villita Historic Arts Village for two days of amazing indie, pop and hip-hop artists. Most notable were the performances from headliners Bastille, Young The Giant, The Naked and Famous and De la Soul. For its fifth year throwing a huge bash in the heart of downtown San Antonio, Maverick proved once again to be one of the city's biggest and best annual musical events. Here are a few of our takeaways from the weekend.


Maverick's so-called "Juarez Stage," which was one of the two free stages at the festival, sat towards the back of La Villita Village and served as sort of the chill zone for the event. The stage hosted of rotating cast of DJs, including DJ Mighty Iris and DJ Catwalk, who played a mix of house, funk, electronic and soul while people kicked back at and picnic tables.

Walking around the corner and through an arch, you’d find yourself at the La Villita's Arneson River Theatre. Bands performed as tourists walked or floated by on river barges — bands like Calliope Musicals, an Austin no wave rock band that exuded a joyous energy perfect for their sunny Saturday afternoon set time. Closing out the Arneson stage on day two of Maverick was San Antonio LGBTQ pop performer Wayne Holtz. — Chris Conde

Indie pop boys Young the Giant were the big draw Maverick organizers scheduled to cap the festival's first night. But anyone who showed up early caught something very special with set by hip-hop pioneers De La Soul. The sun had barely set as De La Soul (minus David Jolicoeur, who apparently missed a flight from Europe) took the stage and performed an hour's worth of classic boom-bap tracks, including the heavy hitters like “Stakes is High” and the Grammy-nominated "Me, Myself and I." Even though Kelvin "Posdnuos" Mercer had to hold down MC responsibilities by himself (with Vincent Maseo on the 1s and 2s) his ability to engage with the audience and command the crowd with his performance was a striking reminder that there’s a reason he’s been rocking mics for 30 years. — CC 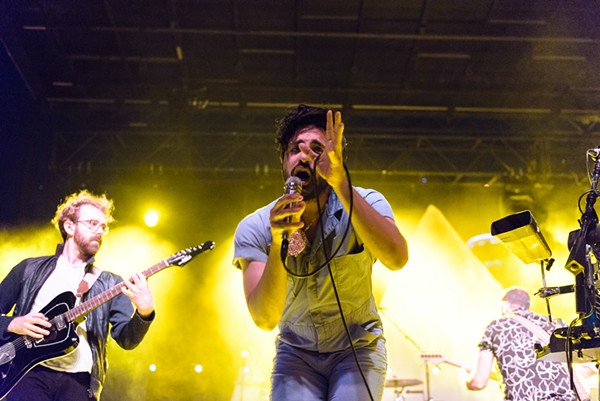 
Young the Giant, led by moon-walking lead singer Sameer, gave an out-of-this-world performance to close Maverick's first night. Opening with “Jungle Youth” from their latest album Home of the Strange, they stole the night with blaring guitar riffs and dancing. The Irvine, California natives performed variety of tracks from all three of their albums, including cuts for adoring fans like “Cough Syrup", “Apartment”, “Mind Over Matter”, “Amerika”, and “Something To Believe In”— their first single from the new album. The band sped through a range of their catalog, including “I Got”, a melodic tune with a chorus resembling doo-wop, and heavier songs like the grungy “Jungle Youth”. Though the band has been open about their political agenda to highlight social issues and identity with Home of the Strange, their Maverick set was absent political commentary and the boys kept it strictly to the music. Closing with “My Body”, the band went out with a bang, as Sameer jumped around stage in an epic finale to a set that amazed the audience. — Kimberly Rivera

The Naked and Famous, Bastille, and more


The main stage on Saturday had a mix of performers from alt country, indie rock duo HoneyHoney, to Latin Grammy winning singer Carla Morrison and indie rockstars Minus The Bear. Maverick Plaza felt much more crowded on Saturday and the vibe was overall pretty awesome considering the steadily rising temperatures of Texas afternoons. As the sun began to set, New Zealand’s The Naked and Famous came out to perform their catchy electronic driven, synth pop jams as the crowd began to groove along to the music. Bright lights lit up the plaza as vocalists Alisa Xayalith and Thom Powers tore through their set. Up next and closing out the festival with a bang, Bastille took to the stage. Pulsing drums and loud guitar riffs pumped through the speakers as the audience began bouncing to the lead of singer Dan Smith. At one point, Smith walked through the audience singing to people before circling back up on stage to rock out one high energy set. The British heart throbs brought the festival to a successful culmination with their hit “Pompeii” one of the most anthem-y sounding indie pop song to come out in the last several years.

At the end of past Maverick Music Festivals, it was easy to say things like "I can't believe this is happening in San Antonio" so, the precedent for high quality entertainment seemed to have been pretty firmly set for this year. If Maverick's goal this whole time has been to, as organizers put it, "elevate live concerts in the Alamo City to the next level," we definitely think they hit that mark. — CC