Beto O'Rourke, the Guy Who Wants to Unseat Ted Cruz, Actually Had a Pretty Awesome Band in the '90s 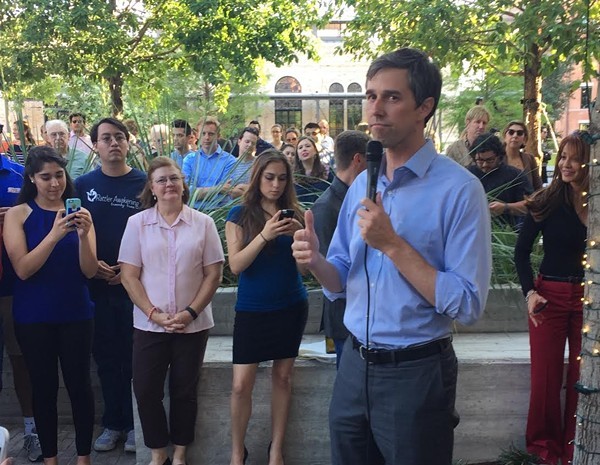 You may also have heard that O'Rourke used to be a punk rocker and had a band called Foss. He actually talked about it on his San Antonio stop outside the Southerleigh brewery last week. He even used it as an analogy for his underdog Senate run.


“We were writing our own songs, we had no record label or corporate producer. Our music was just the stripped down, basic roots of rock and roll, and people connected with that,” O'Rourke said. “Since we launched this run for Senate two weeks ago, it’s felt a lot like that — rock and roll at it’s roots. And it’s making this campaign a helluva lot of fun."

It was back in the early 1990s that O’Rourke played bass and sang in the early first-wave emo/post-hardcore band alongside Arlo Klahr, Mike Stevens and Cedric Bixler-Zavala. You read that right: the singer from At The Drive In and The Mars Volta played drums with the guy now running to unseat Ted Cruz. Seriously, how many politicians do you know who can say they were in a band with a member of arguably the best post hardcore band of the late 1990s-early aughts?

Bixler-Zavala actually tweeted about it a few years ago.

O’Rourke and the dudes from Foss toured the United States and Canada in the Summers of 1993 and 1994 after releasing a self-titled demo and 7-inch record they called The El Paso Pussycats. The music is reminiscent of bands like Mineral and Braid and incorporates emotive single note guitar progressions and yelling vocals that still are somewhat melodic. In a recent interview with the Washington Post, O’Rourke conceded that he “wasn’t that good at it” and that his dad encouraged him to pursue a different passion after he graduated from Columbia University with a bachelor's in English literature.  Though we doubt there are any plans to get the old band back together (Cedric's kinda busy these days), you can still stream their music on their old Myspace page and check out some live footage from an old El Paso cable access talk show called Let’s Get Real.