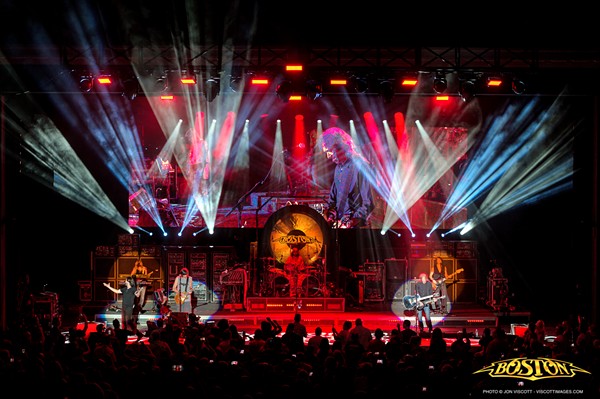 Boston is far more than just a band. Lead guitarist Tom Scholz is famous not only for being the lead guitarist of a legendary American rock group, but also for his inventions and contributions to music. Brad Delp, original lead singer, can reach the high-notes of a screeching guitar riff. Curly Smith has worked with an incredible number of rock artists. Basically, Boston is kind of a collection of musical prodigies.  After recording several demo tracks in the ‘70s, Boston brought their music to the mainstream. The band’s 1976 self-titled debut album is still one of the highest grossing debut rock albums in U.S. history, with over 17 million copies sold. With a catalogue of  hits like “More Than a Feeling”, “Amanda”, and “Don’t Look Back” spanning decades, Boston is a band that refuses to go out of style. Today, the band is fronted by lead singer Tom DeCarlo (former Boston cover singer). Scholz, Smith, DeCarlo and the rest of Boston come to San Antonio as one stop on their national Hyper Space tour. The Alamo City’s Majestic Theatre invites rock lovers to “close their eyes, and slip away” to the sounds of one of the greatest bands to a grace the genre. $50-126, 8pm, Majestic Theatre, 224 E Houston, (210) 226-5700, majesticempire.com. — Kimberly Rivera

If you’re at all like us, you might feel the need to respond to someone saying, “Oh this band’s from Austin, check it out” with an immediate eye-roll or an audible “Who gives a fuck.” That’s because perpetuating the tired notion that just because you’re based out of [insert random city here] automatically makes you sound good is lame and basic. AF. Still, that doesn’t change the fact that there are some pretty amazing bands that call 512 home – like Calliope Musicals, which was recently named “Band Of The Year”  at the Austin Music Awards. San Antonians might remember the band, which played a killer set at the Arneson River Theatre during this year’s Maverick Music Festival. The six-piece indie rock group makes music reminiscent of School House Rock...but like, on acid.  It’s a sound that feels familiar yet wild, and the band’s live show is not to be missed.  Also on this week’s bill is another ATX group, Sphynx, which features traces of Daft Punk in their danceable indie pop sound. With Wayne Holtz, 9pm, $5-$8, 502 Bar, 502 Embassy Oak. — Chris Conde

On Friday, Saarinens, a local indie rock/power pop group led by singer-songwriter Michael Chapa (formerly of Whiskey Ships), will celebrate the release of its second recorded effort to date, and first since 2015’s debut Modern World. The new EP, which is called Animal, follows along right where Modern World left off, with excellent, nuanced songwriting, instrumental prowess aplenty (though never flashy), and a vague Pavement meets Yo La Tengo meets Wilco meets South Texas vibe. The Saarinens are a kind of low key Saytown supergroup, featuring, in collaboration with Chapa, the estimable Raul Alvarez (Cartographers, Slomo Drags) on guitar, keys, and backing vocals, Darren Kuper (The Jazz Protagonists, King Pelican) on drums, Brant Sankey (producer for The Please Help and more) on guitar, and Geoff Gilkes on bass, keys, and vocals. To boot, the EP features some terrific, surreal album art by constantly brilliant local artist/musician/writer/educator Hills Snyder. As if you needed more reason to check out the show, Period Modern (a retro furniture store) is a swell environment for an intimate concert, plus, White Elefant will open. $10.00 (suggested donation), 7:30pm, Period Modern, 4347 McCullough Ave, (210) 902-1217, periodmodern.com. — James Courtney 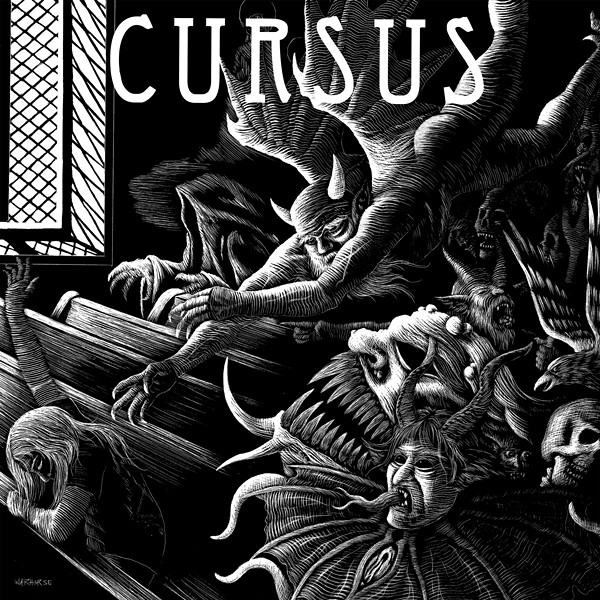 If super-slow distorted guitar riffing, growling vocals and drums that sound like a building implosion is what you’re into, then welcome to Cursus. For those unfamiliar with the extreme-metal sub-genre, it’s pretty easy to guess what something labeled doom metal or sludge or “funeral doom” sounds like: dark, heavy and sloooooow. In 2013, guitar and vocalist C.J. Duron and drummer Sarah Ann Roork started writing their early Sabbath- and Eyehategod-inspired blend of down-tuned, down tempo metal.  A few months later the duo (who have been a couple for about 8 years) released their Summer Solstice Demo, which was well received in the regional metal and DIY music community.  “We’re not trying to sound like what we’ve heard over and over, but there are definitely some elements of [music] we grew up with that are embedded in what we do,” Duron told the Current.  The band’s eponymously named debut is already available online through the Houston-based label Artificial Head and the band has plans to tour after the album release show. With Percocet, Toluca & Grupo Frackaso, 9pm, $5- Limelight, 2718 N. St. Mary’s St. — CC

La Santa Cecilia loves San Antonio. To be sure, I have no concrete evidence to support this statement, but consider the fact that the Grammy-award winning, banda panmericana has played here frequently amid its rapid rise to stardom (at least in the Western hemisphere). What’s more, the kinetic and consistently life-affirming outfit, which is actually from Los Angeles, shares San Anto’s multicultural makeup, presenting, over the course of six albums in eight years, a radical mish-mash of culture in sonic form: from cumbia to rockabilly, from bossa nova to bolero, from Mexican folk to Mariachi, from rock and blues to Rancheras and jazz. And, that’s not all: the six-piece has decided to play Paper Tiger on the date of the release of its new visual album Amar y Vivir, which, recorded live over a wild five days, finds the group on location in Mexico City, dancing, singing, and playing through, and deep into, the heart of the city. To what do we owe this devotion? No me importa. Let’s just make sure we show up to say thanks. $20.00, 8:00pm, Paper Tiger, 2410 N St Mary’s St, papertigersa.com. — JC

I sold a pair of Vans to Chevelle frontman Peter Loeffler at a skate shop in North Star mall in 2010. He was checking out the wall of shoes we had on display as he passed the front of the entrance and, long story short, he comes in the shop and cops a pair of Vans. Long before shopping for kicks with record label money, however, Loeffler and his brothers Joe and Sam formed their three piece alt-rock/nu-metal group in the mid-’90s in Illinois, just outside of Chicago.  The band released a demo, jumped on the Christian label Squint and eventually released the album Point #1 which garnered attention from the Christian music community. Their second debut Wonder What’s Next however, which was released through Epic records, solidified their place in the alternative rock community and helped the band transition from their religious roots to secular rock arenas. Since then, the group has continued to write their heavily Tool-influenced alternative rock, release albums, and buy shoes from malls. On tour continuing their support of their latest release The North Corridor, Chevelle proves that sticking to the sound that got them big in the first place hasn’t been the worst idea.  With Aeges, 7:30pm, $29.50-$55.00, Aztec Theatre, 104 N. St. Mary’s St. — CC

Few genres evoke the imagery of viking armies setting fire to their enemies with flaming arrows  like that of symphonic power metal – especially played by bands that hail from Sweden. Composed of members from metal acts like In Flames, Ceremonial Oath and Dark Tranquility, Sweden's Hammerfall formed in the early 1990s and are just about as epic as epic heavy metal can get. Singer Joacim Cans wails over Oscar Dronjak’s technical melodic riffs for a blend of metal that would be the perfect soundtrack for setting a castle on fire in the 16th Century (or riding around Loop 1604 or whatever). Basically, Hammerfall is the perfect excuse to wear armor and get crazy at a metal show. Chances are you probably won’t be the only one to do so. With Delain, 8pm, $31-$76, Alamo City Music Hall, 1305 E. Houston St. — CC

Frankie Valli is an American treasure. Seriously. Aside from possessing one of the most penetratingly beautiful falsettos in the history of pop music and having recorded some of the most iconic songs of the last great American century, the now 84-year-old Valli, who proudly reps Newark, makes it easier to forgive New Jersey for the likes of Snooki, or even Bon Jovi for that matter. The man who brought you “Big Girls Don’t Cry,” “Walk like a Man,” “Sherry,” and “Rag Doll” (just to name a few), and was recently immortalized in film with Clint Eastwood’s adaptation of Jersey Boys, is still at it after all these years. Don’t miss the chance to see how well the icon is holding up, as he brings the latest incarnation of his group The Four Seasons to town. $45.00-$125.00, 7:30pm, The Majestic, 224 E Houston St, (210) 226-3333, majesticempire.com. — JC

These dudes from Houston have been rocking long beards well before guys started to wrap their fragile masculinity inside facial hair. Noted for not having a lineup change in 45 years, and being one of the major contributors to roots rock and blues through the 70s and early 80s, ZZ Top originally formed 1969 after two members of frontman Billy Gibbon’s band Moving Sidewalks were drafted into the military. Dan Mitchell, who also played in Moving Sidewalks, was replaced early on by Frank Beard and alongside Gibbons and bassist, keyboardist and co-vocalist Dusty Hill, the three have played their blues inspired roots rock through nearly half a century. 8pm, $45-$125, Majestic Theatre, 224 E. Houston St. — CC