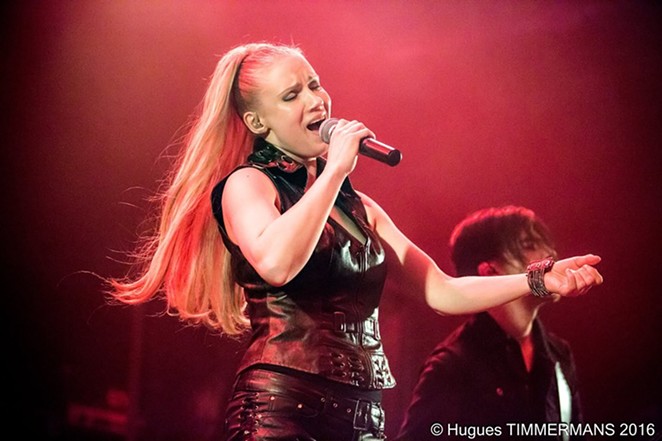 Maybe there’s something in air, because a number of symphonic and power metal groups have been charging through the 210 lately. Not that we’re complaining. Last week it was Hammerfall and Delian. now this week it’s Sabaton, Battle Beast and Leaves Eyes.  While all of these bands certainly have their own distinct sound, (to non-metal fans, y’all probably won’t be able to tell a difference), they all find a commonality in their use of triumphant-sounding guitar riffs, pummeling drums and operatic vocals. Basically, this music is epic as hell.  Also, pick a random song from any of these bands, and the themes and lyrics will most likely include Viking lore and ancient battles involving armies and mythical beasts. It’s an orchestra of shredding. With Battle Beast, Sabaton, 7pm, $21-$25, Alamo City Music Hall, 1305 E. Houston St. — Chris Conde 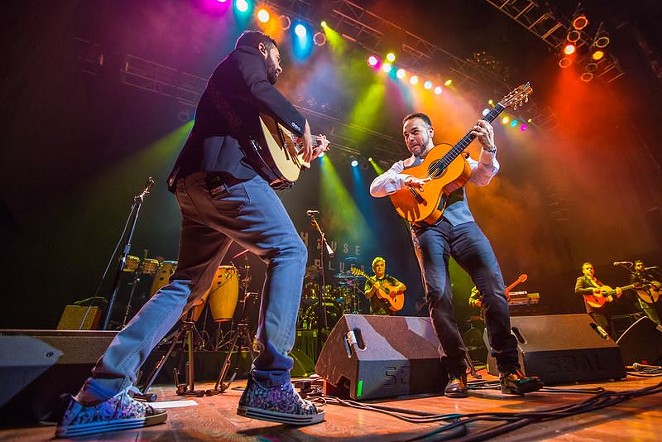 
The multi-Grammy award winning group Gipsy Kings really has nothing left to prove. Since its debut album, 1978’s raw and unplugged-feeling Allegria, the band has consistently produced stellar (and quite unique) music that fuses Catalonian musical traditions with salsa, rumba, pop, and flamenco. While the group’s music can sometimes sound too pleasant and too easy-listening on record (especially in some of the more recent output), the live experience of Gipsy Kings is anything but staid. Liberated from the trappings of overbearing production, the band is nigh explosive in the live setting, operating in the great tradition of its forbears, capable of moving showgoers, body and soul. While Gipsy Kings hasn’t released an album since 2013’s Sabor Flamenco, the group’s thirteen albums of material to date should provide for an unpredictable set list that spans a truly singular musical odyssey. $49.50-$89.50, 8:00pm, The Majestic, 224 E Houston St, (210) 226-3333, majesticempire.com. — James Courtney

Forming in Osaka, Japan at the end of 1981, Shonen Knife ignored the rising popularity of J-pop and gravitated toward writing music that was high-energy and heavily influenced by ‘60s rock, which ended up securing them a spot as opening act for Nirvana on the Nevermind tour. In a 1993 interview with Rolling Stone, guitarist and vocalist Naoko Yamano said that when Kurt Cobain initially asked about touring with the band, she didn’t know who they were. So she went to the record store, bought some Nirvana, saw their appearance and… “They looked a little bit wild and dirty.” They were reportedly even a little afraid of the grunge kings until Dave Grohl helped set up their drums and Kurt Cobain made Yamano a PB&J.  Besides touring with one of the most influential rock bands of all time, the Japanese trio have been credited with opening the door for more international acts to break into the American circuits.  With 22 albums of solid Ramones-esque punk under their belt, Shonen Knife prove that they’re as sharp as they were when they first started cutting up audiences with their live performances over 35 years ago. 8pm, $13-$15, The Korova 107. E Martin St. — CC 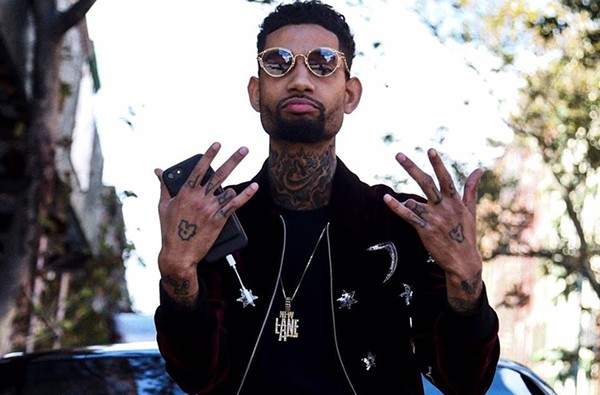 If you’re going to make music with even the slightest hint of trap in the mix, you’d better come correct. Because do we seriously need another rolling hi hat beat for some middle-schooler to “dab” to? Probably not. But PNB Rock, born Rakim Hasheem Allen, actually takes the played-out trap-phenomenon-that-won’t-die to a place that won’t bore you to death. With the addition of his catchy auto-tuned R&B vocals, Allen elevates trap-heavy beats to a space that feels fresh enough to avoid cringing. And while his voice is strong (even behind the auto-tuner), his cadence is punctuated by interesting syllabic patterns and cadence change-ups to keep listeners interested.  Though the drum sounds and rhythm feel familiar, the layering and texture of echoing percussion and synth melodies combined with Allen’s hip-hop cadence make for a sound that’s unmatched by anything on the radio right now. With Amea, 8pm, $15, Paper Tiger, 2410 N. St. Mary’s St. — CC

Devin The Dude
Friday, May 19

Even though Devin The Dude was signed to Houston label Rap-A-Lot Records throughout the 90s and early aughts, he really didn’t (and still doesn’t) sound like he’s from Houston at all, which may have been what helped him stand the test of time (unlike many of his many chopped-and-screwed HTX counterparts). Born in Michigan before moving to moving to St. Petersburg, Devin Copeland eventually wound up in Houston where he met Rob Quest, a blind rapper and record producer, and the duo formed the group the Odd Squad. The Squad (later known as Coughee Brothaz) signed to Rap-A-Lot records with artists like Scarface and Geto Boys. Copeland moved to Scarface's group Facemob but finally pursued a solo career in 1998 and released the album The Dude, which was so vastly different than the darker, street-life songs that he had contributed to with his previous groups. You almost got the feeling that Copeland wasn’t really concerned with appearing gangster or edgy, rather just a guy that likes to smoke weed and write raps. On his latest effort Acoustic Levitation, Copeland is clearly in his element as he delivers his spaced-out lines over beats that land somewhere between trap and psychedelic funk. It’s weird as hell, and totally makes sense for the oddball rapper. 8pm, $20-$65, The Korova, 107 E. Martin St. — CC


Piñata Protest, San Antonio’s favorite Tejano-punk band, has been making waves nationally (and even internationally) for several years now. In fact, the hard working, hard touring crew, led by squeezebox murderer and firebrand performer Alvaro del Norte, has played far more shows outside of SA than inside over the past year or so. Fresh off a national tour with Brujeria, Alvaro and the boys are wasting no time getting back at it. On Friday, catch the electric and frenetic performers at Bang Bang Bar, as they gear up to head out on the road for a twenty-date tour that will find them playing in Mexico, a place in which their sound is deeply-rooted, for the first time. Piñata Protest will also be releasing a brand new EP, entitled Cuatros Exitos, on the occasion. In conclusion, this would be a fine time to celebrate this local treasure of a band, even as its purview becomes less and less local. $10.00, 9:00pm, The Bang Bang Bar, 119 El Mio Dr, (210) 320-1187. — JC

Even if you somehow haven’t seen a television in the last 30 years (or had parents that tried to over-shelter you growing up), you could surely still point out Bart Simpson in a cartoon family lineup. The longest-running American sitcom of all time, The Simpsons has now extended its impact into the realm of metal with the Ned Flanders-inspired band Okilly Dokilly, whose five members dress up like Homer’s hyper-religious next-door neighbor and use him as the inspiration for their lyrics. The story goes that the vocalist and drummer were in line at a grocery store, and while entertaining themselves by coming up with “cutesy” names for brutal hardcore bands the name Okilly Dokilly surfaced and they just could not say no. Though their music isn’t as technical as some of their metal-core counterparts, the point isn’t necessarily the music – it’s that five dudes who are dressed up as arguably one of the goofiest cartoon characters of all time are about to bring the mosh. With Beatallica, 7pm, $15, Paper Tiger, 2410 N. St. Mary’s St. — CC


Locals, especially older heads, who worship at the midnight altar of rad riffage and heavy fuckin’ rawk will want to be at The Aztec Wednesday to pay tribute to one of the original masters of goth rock/post-punk: The Cult. The seminal U.K. band, which formed in the early 1980s and has been quite active since 2006, after taking two stints off in the late 1990s and early aughts. The Cult’s solid 2016 album Hidden City completed a thematic trilogy of albums (begun with 2008’s Born Into This), so we can expect the band to lean heavily on songs from those three dense and rather spiritual albums, even as they indulge fans with the classics. With a sound that’s built on blistering and doomy percussion and wild and aggressive guitar extrapolation, it goes without saying that The Cult is known to melt faces with its live show. $30.00-$780.00, 8:00pm, Aztec Theatre, 104 N St Mary’s, (210) 812-4355, theaztectheatre.com. — JC