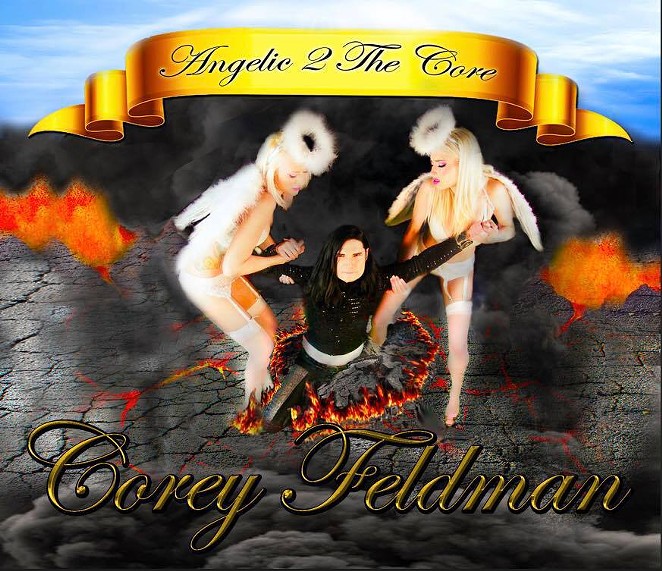 Ex-teen heartthrob Corey Feldman, known for his work in The Goonies, Stand by Me, and Lost Boys, is gracing San Antonio with his presence on May 26 with a stop on his awkwardly-titled "Angelic to the U.S. Summer Tour."

That's because the has-been actor has somehow managed to turn his apparent midlife crisis into an unlikely music career. Unfortunately, Feldman’s swerve into music has been more goony than dreamy lost boy.

The "outsider artist" managed to get mainstream attention and headlines, albeit somewhat mockingly, via his now infamous Today Show performance. Feldman came out backed by an all-female band of “angels” he's adopted into his life, an almost cult-looking group centered around their former child star demi-god. "Corey's Angels," as he calls them, dress in lingerie and live with Feldman in his "Feldmansion." After occasionally making news for, say, an infamous string of house parties at said Feldmansion or the semi-viral "success" of his very strange music video “Ascension Millennium,” the ‘80s star made his mainstream return on ABC’s Celebrity Wife Swap in 2015.

A year after that, Feldman to busted the typical middle-aged comeback format when he performed on the Today Show to support his new album, Angelic 2 the Core. As you might expect would happen when a former child star dressed as a Michael Jackson impersonator and backed by low-budget Victoria’s Secret angels decides to go on live TV, Feldman's performance of “Go 4 It” quickly went viral.

After several weeks of ridicule, Feldman returned to Today Show’s open (and ratings thirsty) arms for another shot with “Take a Stand,” a breezy, trying-hard-to-be-a-political protest anthem against negativity. It was another dull-sounding generic version of a pop song — surprisingly, one of the less aurally offensive efforts off Feldman's new double LP.

In fact, Angelic 2 the Core has a theme: the bulk of the songs start with Charlie’s Angels-inspired skits that start to sound more like a softcore porn plot than concept album. The music, which Feldman has described as "angelic funkadelic", is basically just generic party music. It isn't necessarily the random dubstep-inspired wubs or Garage Band-quality beats that make the album hard to take seriously, but rather the faux-inspirational lyrics sung by Feldman’s raspy and a sometimes goblin-like voice combined with the backing of his angel choir. I can't imagine any dance club DJ out there wants to spin Feldman's production-nightmare duets with Fred Durst.

But Feldman seems to be selling more spectacle than music anyway. In a press release for his upcoming San Antonio performance, he promises "the world’s most Beautiful and Angelic backing band ever created." He says he'll play all the "well-known hits" off his album, along with covers from soundtracks of films he's starred in — so maybe we'll get to see Feldman stumble through something off the Lost Boys soundtrack.