Of all the second generation post hardcore bands to emerge during the late aughts, Emarosa was at the top of the game. For a blend that matches emotional boy-band melodies with glittery sounding guitar riffs, the Kentucky based four-piece have managed to stay true to their roots and have garnered a solid band fan base. Former vocalist Jonny Craig could sing the shit out of some high-pitched melodies, but that certainly didn’t make up for the alleged heroin use, internet scams, and sexual harassment reports that have followed him through his career.  If you were a scene kid at all during the heyday of Dance Gavin Dance and Circa Survive, then you most likely know what I’m talking about. Which probably explains the Emarosa’s decision to kick him out of the band in 2010. Since Craig’s departure though, founding members ER White, Jordan Stewart and the rest of the band continued to carve their own place in post hardcore, and with their latest release, 131, the quartet prove they’re doing just fine without him. With Chapel, 6pm $13-$15, Jack’s Patio Bar, 3030 Thousand Oaks — Chris Conde

The only thing that made last year’s way-overhyped Suicide Squad movie worthwhile was Kehlani’s break-out song “Gangsta” (Fight me, Batman fans).  From start to finish, it’s a banging R&B track that showcases Kehlani’s sultry self as she exhales crisp melodies over the rise and fall of a shape-shifting trap beat. Earlier this year, the Oakland-based singer released her sophomore effort SweetSexySavage, which was a dynamic blend of ‘90s R&B and contemporary pop. The thing with Kehlani is that she’s not some manufactured product packaged by record company executives. She’s actually lived a challenging life and has had to put in work to get to where she is now. “I literally remember having to wash my underwear in the shower and blow-drying them... and I’m banned from [a few] grocery stores from stealing stupid groceries just to eat,” she told the Los Angeles Times in an interview earlier this year. Despite overcoming the obstacles life has thrown her way (which she references in her lyrics), Kehlani is proving to be a new favorite for fans of R&B.  With Ella Mai, Jahkoy, Noodles, 8pm, $25 (Sold Out), Alamo City Music Hall, 1305 E. Houston St. — CC

Vapure, a hookah lounge and yet another bright spot in San Antonio’s (happily) flourishing DIY music venue landscape, is hosting a swell show that includes travelling acts Jake Dromgoole and Aztec, and newcomer on the local scene Sky Ark. The fourth act on the bill, however, is the one that we are most excited to catch: Saturn Skies. The SA duo, comprised of Darian Thomas (also of Femina-X, The Foreign Arm) and Robert Wilson, was formed when both members were music students at the University of the Incarnate Word. In March, Saturn Skies released its dynamic and eclectic debut album Magenta. The duo’s sound, which should be quite interesting to catch live, is avant-garde pop meets oddball R&B meets an off-kilter take on experimental electronic music. The result is music that is light on limber legs yet labyrinthine, music that seems to reveal itself anew each time you return to it. Check out the album at saturnskiesart.bandcamp.com. $5.00, 7:00pm, Vapure Lounge, 5431 Grissom Rd, (210) 455-8568, vapuresa.com. — James Courtney

If you ask us, Ants and Porridge Fist are two of San Antonio’s best young bands, each with its own distinct way of plumbing the depths of heavy, experimental rock music. Ants, led by Sam Tussing, makes shit-fi, shoegaze, sludge rock with absurdist extrapolations. Porridge Fist, led by Jacob Gonzalez (who also plays with Ants), has a similar sonic palette, rife with righteous riffage and churning underbelly muck, but journeys more into the weirdo-pop spectrum. Quite appropriately, the band has been known to refer to its sound as dream-thrash, which may seem a practical oxymoron—until you hear Porridge Fist yourself. The two bands are joined on this bill by Dane Rousay’s other-other jaunt (he’s also a talented composer/solo percussionist and member of The Freebiez) Jejune Stars, as well as Psalms and Food Group. $5.00, 8:00pm, Imagine Books and Records, 8373 Culebra Rd, (210) 236-7668, imaginebookstore.com. — JC

The year is 1998. I’m a closeted gay eighth grader who loves bands like System of a Down and Rage Against The Machine. (I’m also 13 years old and living in Florida. Come at me, hipsters.)  Godsmack’s “Voodoo” and “Keep Away” are in heavy rotation on the radio, and, basically, I’m in love with Sully Erna and his beautiful tattooed face. Since crushing hard on the nu-metal frontman (who was obviously influenced by Metallica’s Kirk Hammett), Godsmack’s fame continued to grow until the eventual dip in popularity the nu-metal genre took towards the mid 2000s. Maybe because they rose to mainstream success before the age of Napster and stuck to the formula that has clearly worked for them since the beginning, Godsmack has maintained its surprisingly large fan base throughout the band’s two-decade stint. With a new album slated for release in 2018, which Erna says is to commemorate their eponymous debut record, the Boston-based quartet has cemented their place in alt-rock, nu-metal stardom. 12pm, $49.50-$85, AT&T Center, 1 AT&T Center Pkwy. — CC 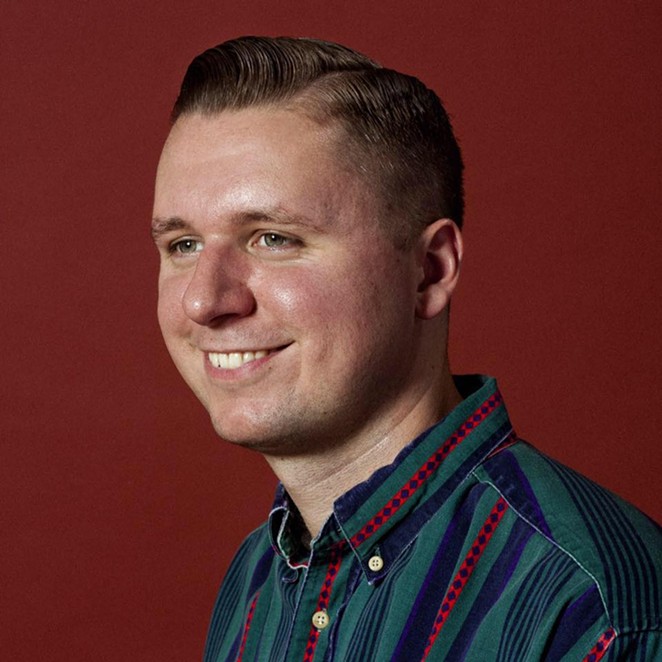 Last time the Fishermen gents set foot on the Sam’s Burger Joint stage, the place was lit up like Christmas with a sweaty, sold out crowd bleeding out the front door. Their return to Sam’s promises just as good of a time with extended Memorial Day hours, meaning this go-round will be an all-day affair featuring Brandon Cunningham, Levees, Booty Feet, Sioux and Fox, St. Dukes, and Family Names, as well as the Fishermen themselves. In addition to commemorating our men and women serving in the military, the music-filled festivities will celebrate the beginning of summer and the time-honored tradition of downing burgers and beer the Sunday before a holiday. Locally owned small businesses will also be posted up at the shindig. A handful of vendors will be selling their goods, including a delicious handcrafted loose leaf tea venture. You’ve got that Monday off, so come hang out and bring the kids, too. All ages, $12-$50, May 28, 4-10:30pm, Sam’s Burger Joint, 303 E Grayson, samsburgerjoint.com. — mkr

Do you like metal? Do you like mariachi music? Then get ready to feel confused and excited because Metalachi (“the world’s first and only heavy metal mariachi band”)  is coming back to San Antonio. The band actually breezes in and out of classic rock and metal with their mariachi interpretations of AC/DC, Guns N’ Roses, and Black Sabbath songs, but it’s their rendition of Slayer’s “Raining Blood” that really hits home in a weird and unexpected way.  The members of Metalachi claim they were conceived simultaneously while their mother Consuela Espinosa was high on horse tranquilizers with a jai alai team in a Super Ocho motel in Veracruz.  Dressed in lit-up sombreros and costumes supposedly made by child factory workers paid in Chiclets and tacos, Metalachi is fun, ridiculous and oddly impressive. With Los Tejanos Muertos, $15-$20, The Rock Box, 1223 E Houston St. — CC 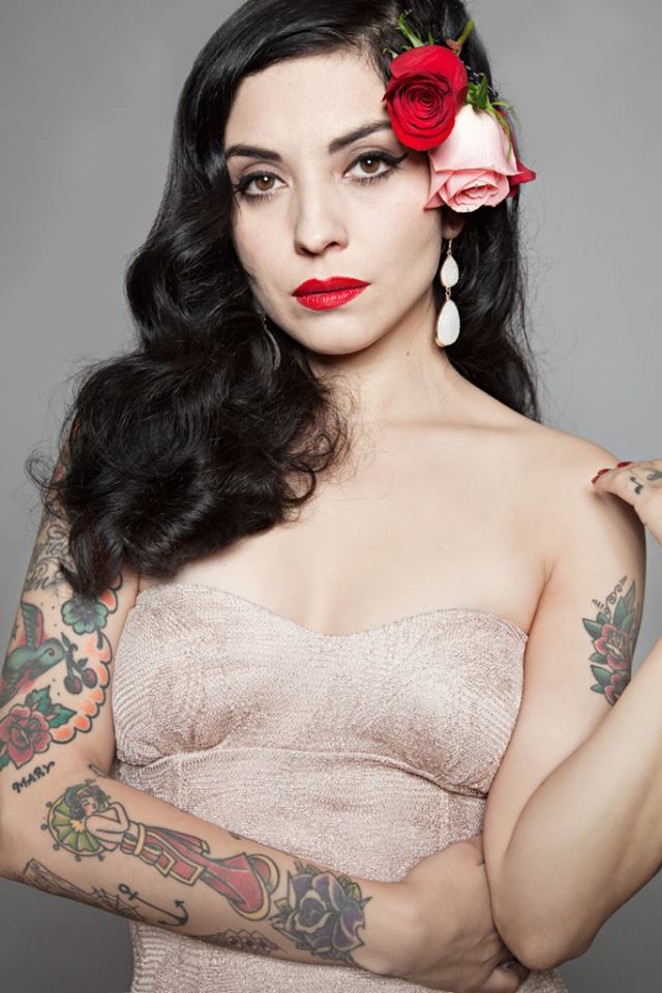 Drawing inspiration from Chilean punk to Colombian rock and even Nirvana, Mon Laferte is as dynamic as the range of artists who have influenced her. Born Norma Monserrat Bustamante Laferte, the multi-instrumentalist began studying music early on and entered Viña del Mar, a musical conservatory in Chile, at only 13 years old.  Performing covers in local dive bars shortly after, Laferte eventually moved to Mexico City and started working on the sound that most of her fans are familiar with today – a blend of indie rock, latin horns and rockabilly. In 2016 she was nominated for Best New Artist and Best Alternative Music Album at the Latin Grammys, an album that she apparently recorded in her house that had no electricity as she explained to Billboard in an interview, “I recorded this album in my house. Actually, I had no power at that time because I didn't have money to pay the bill." She explained that she had to use extension cords and hook up to an outside electrical source in order to complete the project.  Now that’s dedication. 7pm, $21-$71, The Rock Box, 1223 E. Houston st. — CC