Despite how un-cool it might be to my mustache-donning, romper-wearing hipster friends, I’m actually pretty excited to see Metallica – cuz well, it’s fucking Metallica. Regardless of how many desperate, failed-attempts at getting back to their true thrash roots, these are the guys that brought us juggernaut-albums like ...And Justice For All,  Master of Puppets and Ride The Lightning; albums that generations of metalheads lost their virginity to, or smoked their first joint to, or got arrested to, or whatever. The point is, Metallica were an important part in letting pop-culture, and the rest of the music-world know that metal deserved a seat at the table. With Avenged Sevenfold, 6pm, $55-$155, Alamodome, 100 Montana St (210) 207-3663, alamodome.com — Chris Conde

With an impressive resume that dates all the way back to his days as guitarist and lead vocalist for the Steve Miller Band, Boz Scaggs has had an important role in rock and roll history.  The songwriter, who eventually penned hits like “Lido Shuffle” and “Lowdown”, met Steve Miller in high school and began collaborating through college but left to Europe and spent some time in the steadily growing London R&B scene. Shortly after, Scaggs came back to the U.S. and joined The Steve Miller Band for their first two albums before eventually leaving Miller again to focus on his solo work.  Scaggs ended up releasing several albums over the years, including one with session musicians who would end up forming the band Toto.  Also on the bill is Michael Mcdonald who’s best known for his work the Doobie Brothers, but has also collaborated with artists such as Steely Dan and San Antonio’s own Christopher Cross. $69.50-$150.00, 7:30pm, The Tobin Center For The Performing Arts, 100 Auditorium Cir, tobincenter.org — CC

Matching synth-punk progressions with snarling vocals reminiscent of early 90s Skinny Puppy, Atlanta’s NAARC’s a healthy reminder that the saw-grinding, mechanical ambience of darkwave and industrial music is back in business. The band formed in the summer of 2016 and released their first record Loam at the end of the same year. Using new and vintage electronic hardware, I. Cone, M. McCalvin and M.P. Keenan Jr.’s construct disco-industrial compositions perfect for a post-apocalypse dance party in the near and imminent future. Also on the bill is our very own SA artist, Mutant, who uses analog keyboard sounds and VHS samples to construct electro-nightmares in the form of dark, cyber-punk tracks. With Pinko, $5-$8, 9pm, Limelight, 2718 N. St. Mary’s St., thelimelightsa.com — CC 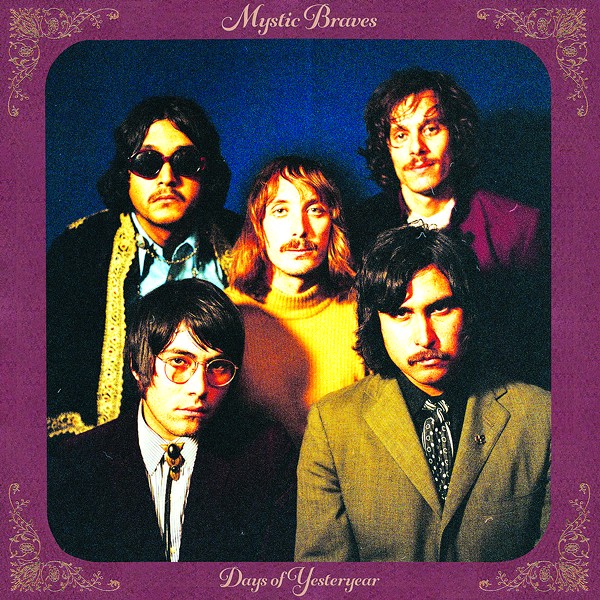 It’s not exactly news that we’re smack dab in the middle of a psych-rock revival. Fests like Levitation (formerly Austin Psych Fest), and Psych Del Rio (which is coming in September), prove that the audience for trippy music is growing and bands like LA’s Mystic Braves are more relevant now than ever.  Combining desert blues guitar riffs with noodly organs and reverberating vocals that echo to infinity, Mystic Braves have been swirling audiences in kaleidoscope rays of sound since their 2013 self-titled debut. Something to appreciate about these dudes, too is their outfits –  I mean, if you’re gonna be a 60s psych-rock revival group, you might as well go all the way right? From haircuts to hankerchiefs to hallucinogenic induced riffing, Mystic Braves embody psychedelia to the T. With The Creation Factory, $10, 8pm, Paper Tiger, 2410 N. St. Mary’s St., 800-513-7540, papertigersatx.com — CC

It seems like the 1990s was when R&B started to land more in the arena of pop-culture.  There was more representation, especially when heavy hitters like Aaliyah, Missy Elliott, Usher and Musiq Soulchild were snagging spots on music video countdowns.  But, lately, it seems like there’s less of it and that’s a shame really, considering there are artists like Anthony Hamilton still pushing the genre forward through the 2010s. Born and raised in Charlotte, NC,  Hamilton got his start singing in his church choir before moving to NYC to pursue a singing career. From there, he toured as a back-up singer for D’Angelo, and eventually started releasing records and collaborating with other artists in the hip hop and R&B world, like in 2004 when he won a Grammy for a song he performed with Al Green.  Since then, Hamilton has continued to lull audiences with his incredibly soulful vocals that should serve as a reminder that R&B is far from over, and deserves some more of our attention. $61.50 - $101.50, 8pm, Lila cockrell Theater, 200 E. Market St., 210-207-8500, sahbgcc.com — CC

Formed over a decade ago by members of the Grammy-winning ATX cumbia crew Grupo Fantasma, Brownout is a hardcore Latin funk ensemble. Over the course of several adventurous albums, including especially Brown Sabbath (2014) and Brown Sabbath II (2016), the group has proven quite a bit more than simply a cool idea for a side project. In the live setting, the eight-piece group of uber-talented instrumentalists really excels, pushing its savory grooves and jungle rhythms past the point of a fever pitch. On Friday, Brownout will play a free show at paper Tiger to celebrate the release of a new EP. As summer fully descends on San Anto, it’s hard to imagine a more deliriously joyful way to spend a Friday night. Free, 8:00pm, Paper Tiger, 2410 N St Mary’s St, papertigersatx.com. — James Courtney

At first listen, anyone can tell that The Sh-Booms have a wide variety of influences: From surf and garage rock to 70s soul and R&B, this Orlando sextuplet is doing some pretty interesting shit. Their singer Brenda Radney actually was noticed by Justin Timberlake through a contest, where the winner would win an opportunity to sing with Timberlake at the 2007 Grammy’s. Though she didn’t win the contest, her vocal talent secured her a slot on the former NSYNC member’s label Tennmen Records.  However, 8 years later, after feeling artistically stifled, Radney decided to leave the label and focus on her group.  Seems to have been the right choice though, ‘cause now we get to hear Radney lead her band through soulful rock and roll tracks that we otherwise may not have been able to experience before. With Kolars, Children of Pop, $10, 8pm, Paper Tiger, 2410 N. St. Mary’s St.,800- 513-7540, papertigersatx.com— CC


When was the last time you purified yourself by tuning into the beneficent powers of naad? No? Let me explain: naad is, in a few different spiritual traditions, the sound of the cosmos, which possesses centering and restorative qualities. Sound intriguing? Well, this Saturday, you can join certified Hatha and Kundalini Yoga instructor and Reiki Master Lisa Tauferner for a special experience in quest of naad. The Gong Meditation and Sound Healing Workshop will offer a chance to “engage with naad through our voices in easy kriyas (posture movement sequences with breathwork) and meditations to prepare the body for the sound healing current of the gong.” As the summer solstice approaches, perhaps it really is time to get right with naad. $35.00, 3:00pm, 5 Points Local, 1017 N Flores St, (210) 267-2652, 5pointslocal.com. — JC

It’s about to get hotter than an abuelita making tortillas over a comal in the summertime, y’all – ‘cause two of Miami’s biggest performers are about to descend upon SA. Before jumping into the waters of world stardom (and when he still had that mole), Enrique Iglesias was asked to contribute a song to Will Smith’s Wild Wild West, after the Fresh Prince attended one of Iglesias’ concerts. “Bailamos” would become an international hit, and boys and girls across the planet eventually traded in their Ricky Martin posters for ones of Enrique Iglesias who, to many, still holds the title for Latin King of Pop. On tour with “Timber” rapper Pitbull, these two Miami hot boys are back to make sure this summer is a hot one in the Alamo City. With CNCO, $39-$747, 730pm, ATT Center, 1 AT&T Center Parkway, 210-444-5140, attcenter.com — CC