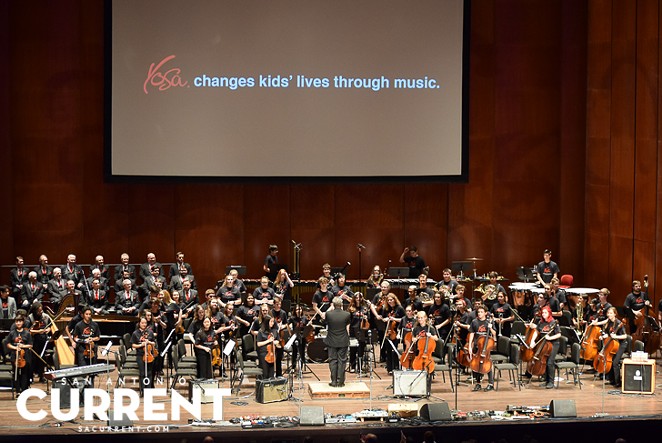 It's become a regular part of San Antonio music lovers' year to eagerly anticipate the next installment of the Youth Orchestras of San Antonio's (YOSA) Classic Albums Live series.

Starting in 2014 with the now 20 year old Radiohead opus OK Computer, the live series, which has also taken on The Beatles' Abbey Road (in 2015) and Prince's Purple Rain (this past March), pairs the best young classical musicians in town with what has been a diverse array of talent from the local, non-classical music scene.

Recently, YOSA ended our anticipation about where the heck they could go from such an eclectic trio of great album choices. The fourth installment in the YOSA Classic Albums Live series, which is slated for next March, will focus on The Eagles' 1976 bombshell Hotel California, one of the most beloved and best-selling albums of all time.

Communicating via email, YOSA's dynamic director Troy Peters to the Current that Hotel California was chosen, at least in part, for it's decade of release. YOSA had already played albums from "the 1960s (Abbey Road), 1980s (Purple Rain), and 1990s (OK Computer), so [he] knew [he] wanted to do something from the 1970s" next.

Peters said he felt that "the sonic richness [of the album] would lend itself well to orchestration and the variety of song styles would easily welcome reinterpretation by a wide variety of guest artists."

In the past, Peters has sort of quietly reached out to local bands to collaborate with YOSA for these things. For this installment, however, they are choosing bands a bit differently.

YOSA will post an open call for musical acts' submissions on its website by July 1. If you and/or your band would like to participate, you'd better hone your Eagles chops. The open call will require the submission of a video recorded performance of a song by the band.
YOSA Presents Hotel California Live
No ticket pricing yet (on sale June 23), 8:00pm, Monday, March 12, Tobin Center for the Performing Arts, 100 Auditorium Circle, (210) 223-8624, tobincenter.org.