If there were just three words I could use to describe the vibe at the Big Freedia show last night at the Paper Tiger, it would be that.

But, long before her performance Thursday night or her feature on Beyonce’s mega-hit “Formation,” Big Freedia was tearing up the New Orleans clubs scene for almost two decades, getting her start as a backup singer for fellow gender-bending Bounce artist Katey Red. Since then, Big Freedia has turned heads with her high-energy live shows that continue to get massive crowds twerking in unison and celebrating a music and culture that was born in New Orleans. 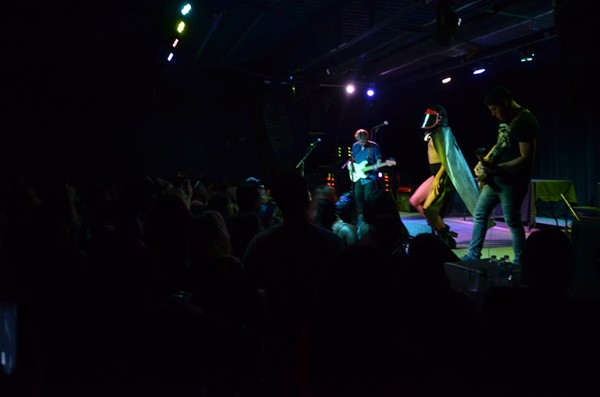 Opening for Big Freedia was local queer pop icon Wayne Holtz, who, with his steady regimen of weekly performances, has been taking the the St. Mary’s Strip by storm. Armed with backup dancers, choreographed numbers and copious costume changes, Holtz delivered a non-stop, pop-fueled set that really highlighted his true showmanship. You can play a show, or you can "Wayne Holtz" a show (young artists take note).


Up next was the queen diva herself, Big Freedia.


As Big Freedia’s DJ got the crowd hyped up, spinning jams like the new Kendrick Lamar song “HUMBLE,” audience members began to pack towards the front of the stage to receive the holy anointing of ass-shaking vibrations the performer was about to deliver.


And deliver she did.

Bursting out on stage with a purple cast on her hand (get well soon, mother) and four backup dancers, Big Freedia launched into her set as a tidal wave of bass, shouting vocals and flashing lights fell over the audience, baptising the crowd in the beauty that is bounce.

Punctuated with multiple forms of dancing, twerking and hair flips, Big Freedia played through a little over an hour of hard hitting bounce tracks with intervals of choreographed movements with her dancers. Somewhere toward the end of the high-energy thumping, Big Freedia says “Ok, I need 15 volunteers from the audience.” If you’ve been to a Big Freedia show before, you’ll know that what’s about to happen is a collective twerk: a stage full of local blood shaking their ass in unison – which is exactly what happened.

As the onstage audience members began to pop their stuff, Big Freedia would walk over to them and give a nod of approval while continuing to command the crowd with her deep vocals.


As the show came to an end, and Big Freedia gave a few parting words, I couldn’t help but feel like I had been a part of queer worship service – as if Big Freedia was our priestess, guiding us with love through a concert of self-acceptance, love and a high-octane ass shaking.