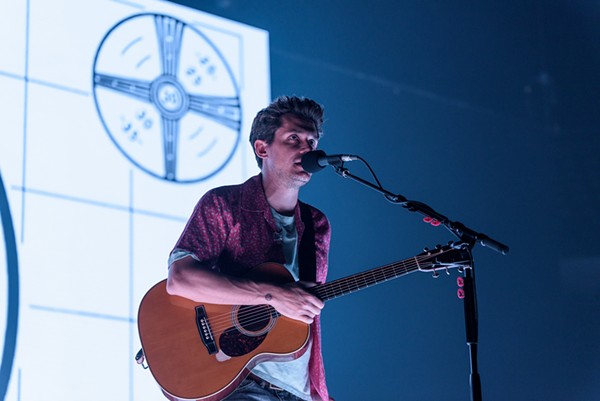 Ok so, I didn’t really start out as the hugest John Mayer fan. Sure, when he came out in the early aughts I was like “who’s this hot boy with an acoustic guitar talking about my body being a wonderland?” And, aside from my shameful fetish of gawking at hot-frat-boy-types-with-guitars (I know, I know … ew), John Mayer, to me, was nothing more than a tolerable acoustic pop musician that I would have sexy thoughts about when his videos would pop up on MTV2.


Until someone showed me John Mayer Trio.


There wasn’t a sliver of commercial pop in the songs – not an ounce of “bubble gum tongue” to be heard. For the first time I experienced John Mayer as he should be experienced: shredding intricate blues riffs that explode like thunder in-between driving bass and tumultuous drum beats. And if you were at the AT&T center Thursday night, you definitely got a taste of what I’m talking about.

The crowd in the arena was pretty typical for a Mayer show. Sort of preppy and looked like they probably weren’t at the Metallica show last month.


I played “count-the-polos” for a while to pass the time before the opening act The Night Game took to the stage. The group sort of sounded like Rick Springfield (you know, the guy who sings that “I wish that I had Jessie’s girl" song) meets the intro music for Full House and/or Family Matters with a dash of alt-rock. They were actually pretty good and their singer can belt out some super high notes with seeming ease.


The Night Game played a decent 45-minute set before the lights went low and John Mayer took the stage with his full band bursting out with “Helpless” the third track off his newest album The Search For Everything. The crowd erupted in applause as his full 7-piece backing band drove through five songs in his first set including “Changing” and “Why Georgia” off his 2001 release Room for Squares.


What was cool about this concert was that Mayer broke up his performance into separate sets, or as he calls them “chapters”: a full band set, a solo-acoustic set, a John Mayer Trio set (which was arguably the best part of the show), and then a final set with his full band again. Each set was roughly 3-6 songs bringing his entire performance to roughly 2 hours.


After his acoustic "chapter," which included songs like “Emoji of a Wave” and “In Your Atmosphere,” Mayer brought up drummer Steve Jordan and bassist Pino Palladino for a John Mayer Trio set. The entire crowd freaked out as the band busted into “Who Did You Think I Was.”


The now-quartet play through “Roll Roll Roll” and “Dirty Work At Crossroads” with Mayer and Vaughn trading off solos and vocal verses. It was a delightful surprise to an already high-energy evening.


The full band came back for a final set after Vaughn exited the stage and closed the night with, of course, “Gravity” as the audience, iPhone lights swaying in the air, sang along to the 11-year-old hit.


In what was thought to be the end of the show, and as people began to exit, a piano get’s rolled out as Mayer quickly returns to the stage for a final-final song “You’re gonna live forever” a proper ending to a night that rose and fell with a damn-near-perfect display of soulful songwriting, blues and rock.