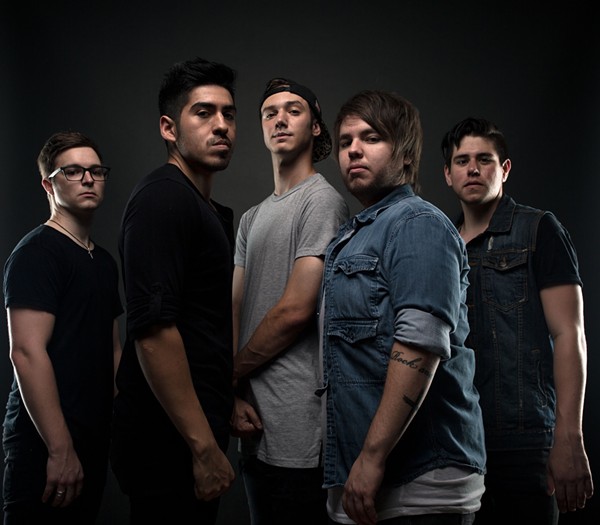 In 2004, I saw the famed Orange County hardcore band Throwdown, twice. Once in Okinawa, Japan where I had just graduated high school, the second in Baltimore a few months later after I had moved back to the states for college. I said “hi” to the dudes after the show and they somehow remembered me and then, which still sticks with me today, they were like “Do you have a place to live? If you need help we have friends here who can get you set up somewhere.” As much as our friends joked around about the “scene” and made fun of ourselves for wearing the tightest jeans possible, there was a camaraderie and sense of community and family built up around the music.


And if you were a fan of post-hardcore, hardcore and metalcore and were going to shows at places like The White Rabbit (now Paper Tiger) in the early to mid-2000s (undoubtedly rocking your side-swiped hair, carabiner key chain, tight jeans and Norma Jean shirt) you’d remember there really was something special and unique about going to shows. It wasn’t just about the music, it was about letting out aggression whilst “hardcore-dancing” during heavy breakdowns, crowd-surfing towards the vocalist to scream lyrics into the mic, and leaving the show completely drained and somehow recharged.


Continuing the music that defined a generation is San Antonio’s own Like Ghosts, a post hardcore fivesome that recently landed on the Dallas-based label Third String Records and is made up of vocalist Alexander Gage, bassist Tyler Slatton, drummer Zac Taylor, and guitarists Noel Hernandez and Andrew Saenz.


“We all come from different [musical] backgrounds but [we're still into] that Van’s Warped Tour-scene music” said Saenz who actually has been living in Austin for school but travels down to San Antonio at least once a week for band practice and shows. Saenz explained that in 2013 the group, like many a new band, formed from several different projects but this time were determined to take it seriously and “do it right," meaning they wouldn’t try and rush to get music out but instead strategically make moves to take their band as far as possible.


And so far, it seems to have been working.


On Spotify, the band currently sits at roughly 10,351 monthly listeners, just 200 below local favorites Girl in a Coma, who are at 10,522 monthly streams. Like Ghosts also recently landed on an official Spotify playlist “Covered In Punk,” a collection of 49 punk rock covers of popular pop, rock and R&B songs, alongside a grip of pop-punk and post-hardcore heavyweights including Fall Out Boy, Yellowcard, Dance Gavin Dance, and Thrice. The song selected was their cover of the Chainsmoker’s jam “Setting Fires” – one of about five covers the band has been releasing since 2015 along with The Weeknd’s “Hills,” Ed Sheeran’s “Shape of You” and ‘N’SYNC’s “It’s Gonna Be Me.”


But playing clever renditions of other people’s music barely scratches the surface of how talented these guys actually are. Like Ghosts’ ability to create fresh-sounding movements within a genre that has become less popular over the years is crystal clear within just a few moments of listening to their new EP To Feel Like You’re Drowning.


"It is challenging trying to develop a fanbase here even though there is a scene for [post-hardcore],” Saenz says “But I still have hope, and when you go to Warped Tour, there’s still a zillion people that [show up].”


Recorded, mixed and produced by Cory Brunnemann, who also worked with San Antonio metalcore favorites Upon A Burning Body, To Feel Like You’re Drowning matches anguished vocal melodies that soar over groove-heavy verses and hooks for a mix that’s focused, aggressive and emotive. And maybe I’m just hungry, but the guitar tones that thicken out the EP are about as rich as biting into a chewy sea-salt caramel candy. Yum.


As far as touring's concerned, Saenz says that Like Ghosts doesn't have any tentative plans for the road but would like to play out eventually. So for now, check out their brand new EP (out today)

For a band that feels like they're arriving maybe a decade too late, To Feel Like You're Drowning is a promise that the sounds of the scene will continue to echo through the present as long as there are folks like Like Ghosts who are willing to breathe fresh life into it.