Our Love is All We Have: Thoughts on Wilco's Monday Night Show at Tobin Center 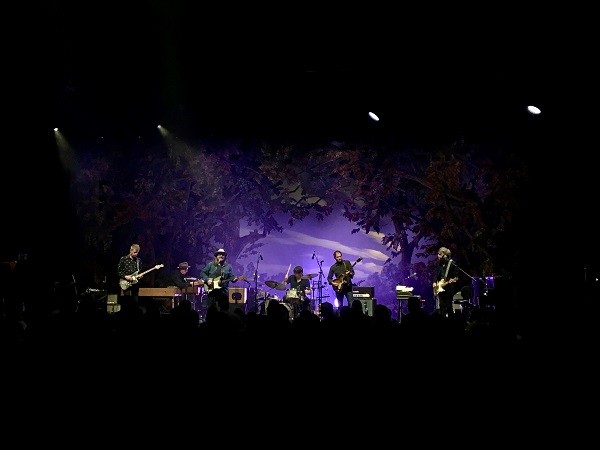 “I would like to salute the ashes of American flags”

There has never really been a time that Wilco hasn’t been relevant. But, as I went through the seminal alt-Americana crew's discography yesterday, in preparation for last night's show at the Tobin Center, there was an especially uncanny sense of topicality — warm and unnerving at once.

It occurred to me that we (as in humanity, if I can still use that term without sounding naive) are moving in shrinking circles around something we are going to be profoundly changed by when we meet it. And, there may or may not be reason for hope.

Somehow, it seems that Wilco's knotty, gently avant-garde, and emotionally fractious songs, like deconstructed and cantankerous heartland prayers to the nearest version of god available, capture the nervous, perpetually crestfallen yet headstrong feeling of our moment.

"Is Wilco a fedora band?"

While waiting for Wilco to start, I heard some moron ask that question. To be fair, he only asked it because a bunch of other morons in the room seemed convinced that yes, in fact, Wilco is a fedora band, and, apparently, that its chill to wear fucking hats inside the Tobin Center.

My short answer to the mind-boggling question, which is now a part of my review (thanks buddy), is: nah. Wilco isn't a fedora band, especially not at this point in its career, because it doesn't have to pretend a goddamn thing. Lot's of people love the band, some probably hate it, but Wilco just does what it wants — and does it incredibly well. Remember: no one wears a fedora because they actually like it.

Besides, just you try to keep a fedora on your stupid head though 23 songs, two encores, and more than two and a half hours of gloriously artful shreddage.

Wilco opened with the fitting "Cry All Day" from Shmilco, played "I Am Trying to Break Your Heart" as if it were the first time, demanded we get off our asses for a devastatingly perfect "Art of Almost" (most never sat back down), and turned things up to an impossible level of taut delirium with "At Least That's What You Said," a straight up shattering rendition of "Via Chicago," and the marauding groove that is "Bull Black Nova."

Guitarist Nels Cline seemed to pour every ounce of frustration and sadness that these dark days have engendered into his virtuoso soloing on "Impossible Germany," and ringleader Jeff Tweedy sang "Theologians" with a sense of immediacy that brought home the timely point that for an "abyss in motion" who "finds more missing every day," it's a sort of defiant comfort that theologians "don't know nothing" about the souls of individuals.

The band ended the show by playing "Hummingbird," "The Late Greats," "Random Name Generator," "Jesus, Etc," "Locator," "Spiders (Kidsmoke)," and "Outtasite (Outta Mind)." At the end, everybody was exhausted and there was a general sense of much needed catharsis about.

Despite the chatter of a boisterous crowd consistently urging direct interaction, Tweedy didn't say a word until after the fourteenth song of the evening. "What's there to say on a day like today?" he wondered aloud.

Referencing Sunday's horrific Las Vegas massacre, Tweedy assured the audience that "Nothing in the world could frighten [him] out of [performing for us]."

"This," he continued in near-exasperation, "may be the only thing I believe in, this kind of communal experience."

His words struck a deep chord for an audience weary from the weight of a world in the throes of irredeemable mass suffering and ignorance. This was not some teenage punk with nothing to do saying "music is my life, bro." This was an accomplished musician/songwriter (a true icon to many), a 50-year-old father of two making the refreshingly humble assertion that art and community are, in the best times and the worst times, the only real remedies for emptiness and agony.

"Our love is all we have"

The most transcendent moment of the evening came as the crowd sang along, at Tweedy's insistence, with "Jesus, Etc." The line between audience and performer blurred, along with the line between sentimentality and satori, as every last one of us sang from our toes the exact message that we both feared and needed to hear: "Our love is all we have."

Maybe it is. And, maybe it'll be enough.