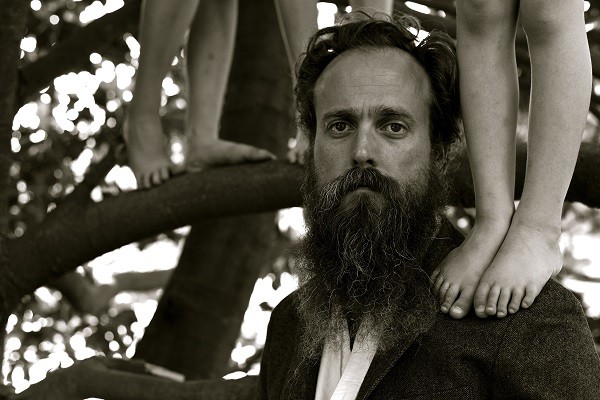 Sam Beam, who records and performs with a rotating cast of players (and sometimes solo) as Iron and Wine, is, for all his indie cred and pop crossover capability, an old soul in the grand tradition of old souls in folk music.

His lush, sad-sack, indie folk-pop, which he's been putting out for fifteen years and six LPs now, is rife with the marks of a consummate observer, slow ponderer, outsider, self-interrogator, and dreamer. In the musical family tree of Woody Guthrie, Beam occupies an apolitical branch that nevertheless includes grappling, in a cryptic and artful manner, with ugliness and inequity on levels personal and universal. Sure, Guthrie and his pals didn't sing with the angelic (yet gracefully world-worn) voice that Beam is known for—but they sure would have if they could have.

To be honest, Beam's more Simon and Garfunkel than Woody Guthrie, but he's more Woody Guthrie than most. Incidentally, he's also more Elliott Smith than a thousand hipster boys who make a show of aspiring to such. Beam's music is consistently beautiful, pristine, and pleasant to hear. But, like Smith for whom the same could be said, Beam's thoughtful music is shot through with a deep sense of malaise, of helplessness, of sorrow, of the ghosts of dysfunctions past, and of the consciousness that life often gets harder, not easier, the deeper you come to know it.

From the haunting sparseness of his earliest releases The Creek Drank the Cradle and Our Endless Numbered Days, which were solo affairs, to the fleshed out folk-rock of his opus The Shepherd's Dog, which featured a large backing band, from the tender and soulful folk-pop of Kiss Each Other Clean and Ghost on Ghost to the recently released Beast Epic, Beam has been so consistent that it’s easy to forget how special his music is.