Sometimes you have to take your time, like Jacob Wick did with “Over the Rainbow” during his October 24 performance at Lowcountry. He augmented and suspended the classic dreamer’s melody, sometimes holding one note through circular breathing for countless measures. Lost in the dream, we weren’t going to see what was over the rainbow any time soon.


In the next parking lot over, a food truck pumped pop music. Traffic and conversation added to the ambiance. His trumpet unamplified, Wick did not attempt to compete with the environment; instead, he melded with it, blending in with the night.


Visiting from Mexico City, Jacob Wick is one of the artists who has toured through San Antonio since October to perform as part of the ongoing experimental music series aptly named Contemporary Whatever. Every Tuesday evening at Ventura, attendees don't know what to expect. In other words, they expect the unexpected.


If it sounds uninviting, it isn’t. The performances can be challenging, but the atmosphere is casual. Much of that is owed to Ventura, a gimmick-free dive bar conveniently situated along the River Walk. Much of that is owed to the main curator Dane Rousay, who facilitates the events with an alternating hands-off, hands-on approach. The underlying concept — as bare-bones as Ventura – seems to go no further than the name. “There had to be some sort of cohesive element to it even if it was just within the name,” Rousay said.


It’s controlled chaos, the control being in the logistics.

“I really like all that kind of stuff,” Rousay said. To Rousay, logistics are usually the hardest thing to solidify in experimental or DIY community events. But the planning ends once the performances begin.

“The people playing the shows are the ones that are going to bring the unexpected elements, which makes it fun," they said.

Contemporary Whatever is most consistent in its unpredictability.


The series is helping to create a new traffic pattern: They, Who Sound in Houston, Me Mer Mo in Austin, Outward Bound Mixtape Sessions in Dallas. All three experimental series recur on Monday, leaving Tuesday wide open for booking some wild sounds, and making San Antonio an attractive destination for experimental musicians already touring through Texas. 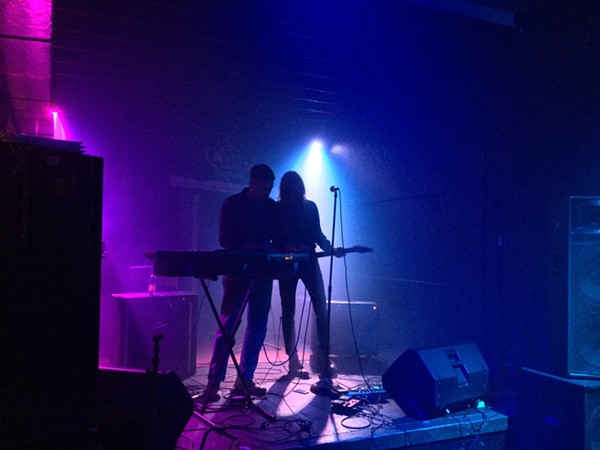 At first, Rousay crowdsourced the internet for performers in order to fill the bills. Now people are coming out of the woodwork. “I’m surprised that I’m able to fill a weekly show,” they said. “Now I have people submitting Bandcamp links that I had no idea existed.”


Conversations are taking place, on stage and off, between locals and travelers, musicians and listeners. The analog conversation between Rick Reed (Austin) and Kjell Bjørgeengen (Norway) was in an alien language during a show last month. Reed’s electronics and Bjørgeengen’s projections provided a dizzy mode of transportation to the outer limits.

Referring to his collaborator’s visuals, Reed said, “It reminds me, in a good way, of how TV sets used to work when I was a kid. The set would have to warm up before it came on, usually revealing this otherworldly image that had a lot of depth to it. Sort of like an imaginary world totally unlike anything in the real world.”


While Contemporary Whatever brings in out-of-towners, it also provides an outlet for local musicians to cultivate their craft and pull out all the stops. Call it an experimental rodeo, or an outlandish sonic salon, if you will.


Nicki Apostolow was the first artist to present a non-musical performance, mixing video art with dentistry. On December 3, (a Sunday show to fit the touring acts Michael Foster and Ben Bennett's schedule) she plans to present a live cooking show.


Accustomed to playing with bands, Jared Flores used the platform to play solo for the first time, which “was another challenge that I had been avoiding for a fair bit up until now,” he said.


Sculptor, linguist and sound artist Svetlana Zwetkof has performed as well as designed flyers for the series. She believes Contemporary Whatever is “not by any means stunted, but could benefit from expansion into other disciplines.”


Contemporary Whatever will continue its ambitious programming through December. Michael Foster, Ben Bennett and Ganjisland are a few of the touring acts booked.


Looking past December, Dane Rousay hopes the series will continue through 2018 and for years to come. Rousay daydreams about extended performances, new collaborations, guest curators and more non-musical experiences. Sure, a flexible aesthetic can be risky, but it can also be fun. Rousay will continue to roll the dice, risks aside.


“I just want everybody to do well,” Rousay said. “Everybody wants to do well in whatever way that makes them feel good.”