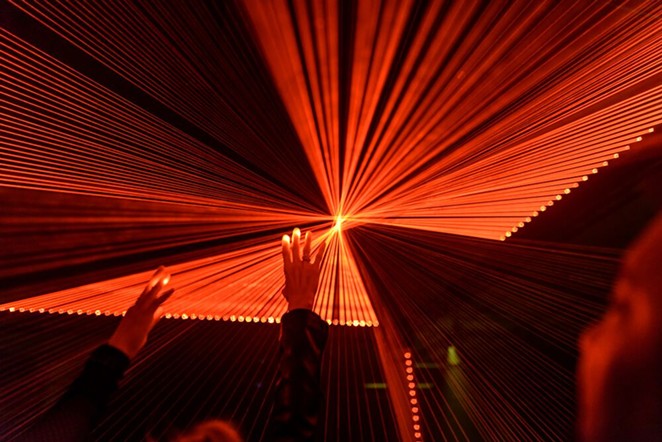 It’s hard to wrap up the all-encompassing experience of this past weekend’s Day for Night festival in Houston. After going to Maverick, SXSW and ACL earlier this year, it’s arguable that Day for Night is leading the pack. Through the art installations (most of which were interactive) and the insanely eclectic lineup (keep reading and you’ll see), Day for Night felt like being an audience member was an art installation in and of itself. 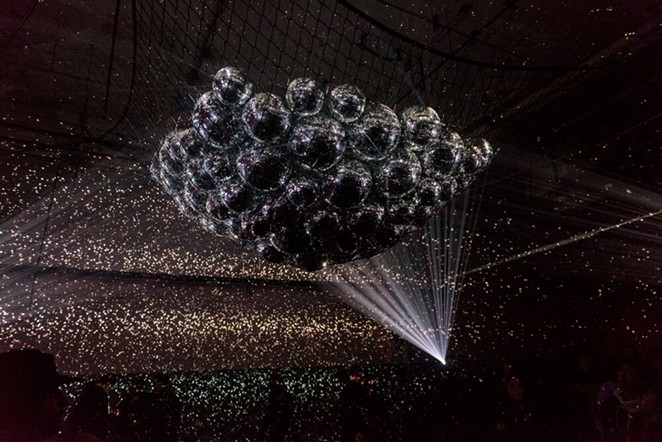 The first person I actually spoke to at the festival was a circus performer named Nate. We sat waiting for the speaker portion of the festival to start. Government transparency activist Chelsea Manning, Nadya Tolokonnikova of Pussy Riot, artists and Lauren McCarthy and Laurie Anderson were slated to give talks with legendary poet Saul Williams performing poetry in between.

Nate told me he was recovering from a broken leg, which made it impossible to perform, and got us both talking about life and art, and learning how to cope when shitty things happen, like [insert any terrible Trump decision here] and, in Manning and Tolokonnikova’s cases (which they addressed in their talks), going to prison for exposing injustice.

With the speakers and my conversation with Nate the juggler and trampolinist, the tone for the weekend was pretty much set: a full immersion of lights, music and art with themes of human connection, and exploring the relationship between technology and people echoing through the speakers, installations and musical performances.

My Saturday began with Princess Nokia comin’ out guns a-blazing to her banger “Tomboy.” The entire crowd in front of the stage bounced and rapped in unison to the hilarious and infectious hook: “My little titties and my fat belly / my little titties and my fat belly.” Halfway through the set the young rapper jumps into the crowd during “Bart Simpson” and crowd surfs through half of a verse before being pushed back up to the front of the stage.

Princess Nokia’s presence at this festival was just one example of how female-forward this event really was. Cardi B, the "Bodak Yellow" singer and first solo female rapper to top the Billboard singles chart in nearly 20 years, performed later that evening. So did punk art collective Pussy Riot, who’s performance was like if Spice Girls sang about activism and dismantling the patriarchy. Also, En Vogue, the quintessential ’90s R&B group, absolutely slayed their Sunday performance, giving audience members all the hits including “Don’t Let Go” and “Free Your Mind.”

Something worth noting was how strangely eclectic this weekends lineup was. For example, right after En Vogue, post-rock veterans Godspeed! You Black Emperor took the stage for an hour-long performance of their slow building orchestra droning that swelled into shimmery climactic bursts. Or like right after Solange’s enchanting set, which incorporated some weirdly awesome choreography, French electronic duo Justice took the stage and destroyed the crowd with what was probably the largest light show I have ever seen.

One of the highlights was a rain-drenched Nine Inch Nails performance Saturday night as Trent Reznor and the gang took it all the way back to the old shit, performing tracks like “Closer” and “March of the Pigs” as well as newer songs like 2013’s “Copy of a.” Even though it was cold as fuck and somehow I thought wearing super short shorts would be cute, in a way the weather sort of fit NIN’s aesthetic and maybe even enhanced the whole experience.

World-known acts like NIN may have drawn the crowds, but local acts were able to hold their own. San Antonio’s House of Kenzo and Houston's DJ Rabit teamed up for a collaborative performance inside on the blue stage, where weirder electronic shit was going down. After watching House of Kenzo blow up over the last couple years in San Antonio and the region as well, it was pretty exciting to see this vogue/art performance collective literally strut their stuff at one of the biggest music festivals in the world.

This weekend felt like it was for weirdos by weirdos in the best possible way. If you were looking to discover, explore and experience something new and impacting, if you were searching for a recharge, if you were looking for human connection, if you were hoping to escape inside color, lights and sound, you almost certainly found all of that at Day for Night 2017.